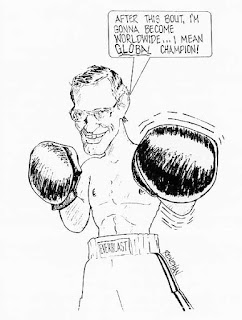 Rod Meredith, in his September/December editorial, is back tooting his horn on what great example and champion he is to the church.  That champion has a long history of wrecking havoc in members lives, saying false things from pulpit and has a unique knack for getting sued.   Meredith's biggest faux-pas was when he had diarrhea mouth at the ministerial conference in Tucson.

His old buddy Raymond "Buffy" McNair was having problems with his wife.  Leona McNair had slowly caught on to how corrupt the church was and how her husband and Meredith were part of the problem that she stopped attending church, which set Buffy into 2-4 hour raging fits of fury.  After this leaked out,  Rod Meredith had to jump into the picture.

Meredith had previously said that too many in the ministry were divorcing for too many easy reasons.  Then along came Buffy needing a divorce and Meredith had to change his tune.  So Meredith stood up on the stage in Tucson, at a ministerial conference and proceeded to slander Leona from the pulpit in front of 700+ ministers that were gathered.  It was all Leona's fault and she defaulted on the marriage, thus setting Buffy free.  Leona found out and sued.  The court case drug on for almost 2 decades.  It was still being fought even after Herb died.  It was still being fought when the WCG started making changes.  It was still being fought when Meredith sat on his ass during the changes and kept quiet.  Eventually Leona prevailed with the WCG settling out of court.  She got $750,000 due to the divisive words of Meredith.

Never being man of real principle, he sat there though many of the changes keeping his mouth shut while the church dropped hundreds of thousands of dollars defending his vile mouth.  He sat there several more years twiddling his thumbs and taking a paycheck till the "God Is" booklet came out.  Meredith pitched a fit and immediately started the Global Church of God.  Or so he says.  Being the devious man he is, he stayed in WCG in order to draw a paycheck while he had some flunkies plotting and scheming to start a new church that the could step into while keeping a steady money stream coming in to.  After letting a child molester and several others scheme to start Global Church of God, he waited until money was in the bank, then he miraculously jumped ship into a new organization.

There he tried to take over the reigns of the church and several on the board refused to let him, Buffy McNair being one of them. Meredith pitched another fit while his child molester compatriot was working behind scenes to take all of Global's money and start a NEW church.  Meredith and his buddies basically bankrupted Global and left them with all of the debt after taking their money.

Hundreds of lives were shattered by Meredith's actions.  Marriages and families were ripped apart.  Meredith did not care because he had power once more and money!  He has yet to take any responsibility for any of his actions and instead bragged about what a wonderful god fearing person he is.  Never once does he apologize for his past in fracturing lives nor for any of the disillusionment he has caused.

He claims GOD raised up the Global Church of God, yet he had no problem in smearing his friend's name, stealing all of their money and ripping lives apart as he deliberately destroyed what his god had raised up!

Because of all of our modern distractions, and because of the breakup of our former association, many thousands of brethren around the world have been deeply hurt or confused. Many are also disillusioned—left with the feeling that Christ “deserted” them, and now they do not know where to go.

As I have previously explained, Christ did raise up the Global Church of God in early 1993, through me—just a very few months after the blasphemous, “God Is...” booklet came out, along with other heretical changes in doctrine. But many were not aware of Christ raising up this Church—or had been poisoned against us by vicious rumors and accusations. So, instead of zealously searching out and proving to themselves where Christ was continuing His Work, many just stayed put or even dropped away from the Truth altogether.

But—mark this!—the living Christ did give people in early 1993 a “way out”—He did raise up a Church with a trained, dedicated ministry of long standing who preached the full Truth and who quickly—within weeks—went on the radio, published literature and began to revive the Work. So Jesus Christ did not “desert” you or anyone else. He is still the living Head of the Church. He is alert, active and powerfully in charge of His Church and His Work! And in His great wisdom, He is now “testing” His people to see what is really in their hearts.

Read the lawsuit here:  Worldwide Church of God vs McNair

...sad for all the people who followed him in the Global/Living split, as they were (mistakenly) following an unconverted leader

People who lived through that split and weren't buying into it saw:
1. Blatent stealing of property (not just money either)
2. Harsh behavior to those who disagreed
3. Arrogant abuse of those who wouldn't follow them
4. Putting a man ahead of God

Meredith is not unlike Dave Pack in this way. One of the many things church brethren have always been cautioned about is self-righteousness, or its companion, self-justification. These naturally come into play in attempts at "normal" clergy-parishioner relationships within authoritarian and legalistic church organizations. Self righteousness and self justification are qualities only permitted if one is a minister.

Has there ever been ONE, just ONE institution of men, religious or secular that hasn't been full of crap?? A sad commentary on the state of man.

Rod Meredith has proven decade after decade that he has terrible character. He has stolen, he has lied, he has coveted, he has slandered and abused people who looked to him for religious leadership.

I truly can not understand how people remain in his church.

Do they have their heads so far in the sand that they don't even know about these things? Do they dismiss the stories as lies? Or, do they know but simply don't care?

Why would any person with half a brain stay in LCG? Can anyone explain?

The Red Cross is one of the most corrupt organizations in the country. Almost all of its money goes to its executives and leaders while scant little goes to victims that need it the most.

Could such selective memory loss be attributable to the calcification of the pineal gland? Enquiring minds would really like to know!

Best you check the Orange Papers.

All one need do is visit that RCMCrimes.com website to see the horror that is Rod Meredith. Maybe that would open the eyes of LCGers.

His excuse was that he was an "old man who didn't know any better" (another lie).

He thought it out, carefully planned and executed the crime of sound mind.

Nonetheless, thousands of LCG zombies believe that he is the "Head of God's Church".

So what does that tell you about LCG members?