Dave Pack: I am the ONLY COG leader who has NEVER compromised 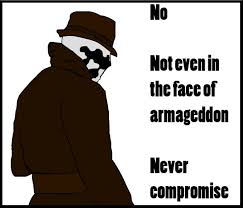 Superfantabulous Dave Pack claims he is the ONLY COG splinter group that has NOT compromised on ANYTHING!  All of he hundreds and hundreds of splinter groups are being led by little men who compromise the law, allow mixed marriages, let their women were make up like harlots, marry outside the church, eat vegetarian, dance Irish dance, build auditoriums, establish colleges, and start new splinter groups.  Bob Thiel is once again suffering major butt-hurt.

All of the splinters have compromised terribly. I haven’t compromised anything about the Sabbath; not just the Sabbath, but about it, or the Law, or the Holy Days, or the knowledge that we’re born again, or the gospel of the Kingdom of God. Now you might say I have, because of prophecy. Okay, then. I’ve not taught there’s an immortal soul. There’s no dead in hell for all eternity. I’ve not said you can interracially marry, or wear makeup, or marry outside the Church. We have thorough baptismal counseling. We maintain all standards of dress, and hair, and no tattoos. You know, we don’t allow all that stuff in the wrong way.

Dave wants it made clear that he has the best child rearing standards too.  The youth he has kicked out of the church over the decades and their parents would beg to differ.

We have childrearing standards.

Dave also wants it known that he has not compromised the word of God by watering down his message by preaching wimpy-ass 45 minute or one hour sermons.  Real men of God preach 2-4 hour sermons!  Dave is like John the Baptist, he has come to show the true way.

We haven’t altered services down to an hour and a half, with 45-minute sermons, the way it is in most of the splinters, never mind Worldwide. The manner of doing the Work is the same. We haven’t watered down any elements of tithing, any aspects of it. The calendar; we do broadcasts; we follow the pattern of doing the Work. Ambassador College; the publications we produce; the quality of conferences and Feasts, and writing literature, and youth tools; building a world headquarters the way I saw it and was taught. We haven’t compromised any of that. The splinters compromise all of it. All I’ve done, like John, is come and show, in many ways, what they always believed.

Dave does admit to changing one thing though...prophecy.  Dave imagines that he has not changed anything or added anything, only that he has explained it properly.

Prophetic understand is the only thing I’ve changed…but I haven’t changed anything, because I’m not adding a new book of the Bible. I’m just explaining what was always there. So, I’ll leave you to look at that principle and go over all of the different things that we have held to, that I have not compromised—for all the decades of my ministry—and it didn’t make any difference how many people stood with me or didn’t.

The families ripped apart, the marriages broken, children thrown out, financial lives ruined, all beg to differ that Dave is the most upright and uncompromising minster ever.
Posted by NO2HWA at 3:14:00 PM

Never Compromised??? --- Dave compromised his SANITY a long time ago!

We need to ask, what would Ron Weinland say to Dave?

Here is you lesson: https://tinyurl.com/ronnie-says

Dave may have failed to compromise on old Worldwide standards, but he's come short of Biblical standards. And nowhere near stoning distance of the standard set by Orthodox Jews.

Some years ago at Painful Truth I wrote a short piece on how one of his Sabbath articles dismissed the restriction on kindling a fire. It argues that "kindling a fire" referred to industrial-strength fires, not striking a match or turning on the gas oven.

In Dave's biography there's an account of what may be keeping "the letter of the law" regarding the Sabbath. It stated that he and his family would sit in the car in the parking lot of his son's school, waiting for sunset. At sunset, his son would jump out of the car, and rush into the school to play in a basketball game. Perhaps the letter of the Law, but definitely not the spirit...

Dave Pack has all the signs of a psychopath. He knows what to say but none of it means anything to him. He is just a manipulator. A biological robot with no empathy.

There is compromise, and there is change. Semantics are being used here. He has changed many things under the guise of "new understanding". Tomato, to-mah-to. It's whatever he wants it to be to suit his purposes. Salesmanship 101.

This is what I dread among offshoots, almost all of them, The lack of humility. CLAIMING WE ARE THE BEST. You can't get saved not if you join us, really? an organisation saves? Only Elohim can save. 1 Corinthians 13 LOVE DOES NOT BOAST. Proverbs 27:2 LET SOMEONE ELSE PRAISE YOU, not your own mouth--a stranger, NOT YOUR OWN LIPS. I'll shut my mouth now, but I am just pissed off and tired. Lamentations 2: Your prophets have seen vain and foolish things for you: and they have not discovered your iniquity, to turn away your captivity; but have seen for you FALSE BURDENS.

"Perhaps the letter of the Law, but definitely not the spirit..."

well Hoss, he didn't even keep the spirit in that example....if he had, he wouldn't have driven to the school until after the Sabbath ended...

kinda like the Israelites firing up the kiln on the Sabbath so that it would be hot and ready to go as soon as Sabbath ended...

I've read DCP material where he rants and raves against anything that interferes with his perception of Sabbath keeping....if it's biblical, he'll have none of it.

All sects of Armstrongism along with their leaders have all been compromised.

If you believe in the Bible, particularly the New Testament, Armstrongism is anathema, creating a venue of idolatry devoid of any not just ethics and morals but anything which might be considered spiritual.

As a cult, it is little different that Scientology in its operation and systems.

It is immoral, unethical and often illegal -- the very picture of compromise mired with lies and deceptions in a realm of science fiction and fantasy.

Dave and Rod are both imitating Herbie on this one. I recall hearing over and over that Herbie never compromised with Gods ways one itsy bitsy bit. As well as exalting himself (forget the 'call no man your master' instruction), this lie gave credibility to Herbies many lies, distortions and sins of omission.

Shouldn't they love God rather than some highly morally compromised man?