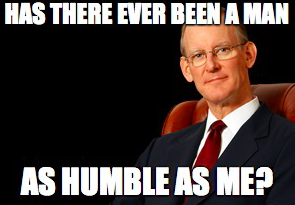 Superfantabulous Dave, leader of the most incredible Church of God to ever exist in human history, the builder of the most beautiful college campus ever built and the brains behind the best internet site in the entire word, is also the world's most humble and modest man ever to exist.


“And the word of the LORD came unto me, saying, Son of man, prophesy against the shepherds of Israel, prophesy, and say unto them, Thus says the Lord GOD to the shepherds; Woe be to the shepherds of Israel that do feed themselves! should not the shepherds feed the flocks? You eat the fat, and you clothe you with the wool, you kill them that are fed: but you feed not the flock” (Eze. 34:1-3).
Now that’s a picture of the ministers of this world who live in kings’ palaces. One of the things that pleases me is that person after person who’s seen my house on campus…most never will, but those who’ve seen it say, “Oh, Mr. Pack, it’s modest.” Now, I think it’s a lovely house inside. But it’s one story, and it’s smaller than the one I had…and I’m mentioning something you’ll read this week…I’m paying more rent for a smaller house. I don’t want a big house. I’m not interested in a big house. I’m interested in something that is fitting, but I don’t want a big house. You look at what the ministers of this world live in, and then there’s how many houses do they have? It’s a disgrace. They eat the flock instead of feeding the flock.

Personally I don't begrudge ministers from some denominations who live in nice houses. Some are inspirational speakers who motivate Christians. They earn their keep.
But in the case of Dave, his whole compound is his home. His effective home is much larger than his house. He also leaves out that he is eating his flock by robbing them of their adulthood by treating them like children. Narcissists value power over wealth any day.

From somewhere, I remember something about being devoted to preaching the "Gospel of the Kingdom," as the reason for ministers, especially "really, truly" ministers like Davey Boy . . . .

Remember Stanley Rader had it right when he said, "It's not what you own, it's what you control." HWA didn't really "own" anything, the Church did. However, he seemed to have it pretty good. Dave is the same way, he is after all CEO of the "RCG Corporation." And he is in total control of the finances, he spends as he wishes. By the way, take a look at Google earth to see his "modest" home.

Dave is like a rocking horse. (Gyrating Horse?) Always moving and going nowhere.

Anon said: And he is in total control of the finances, he spends as he wishes. By the way, take a look at Google earth to see his "modest" home.


What are the coordinates?

Or find Wadsworth, Ohio, search for the Giant Eagle Supermarket, its right next to it. The image is from the early spring, so probably things have changed a bit since then.

6.20AM
A dictionary defines ownership as control.
The office building in his compound is probably more his home than his 'modest' house. Perhaps it's modest by other minister standards, especially Herbie standard, but not by the steeple standard.

A Google maps photograph of his house would be interesting.

As humble as David Pack?

Alexander the Great springs to mind.

10.14 AM
The people that Dave has robbed blind will appreciate you giving them the cruise missile co ordinates.