Bears ate Elisha mocking children...Could it happen to you? 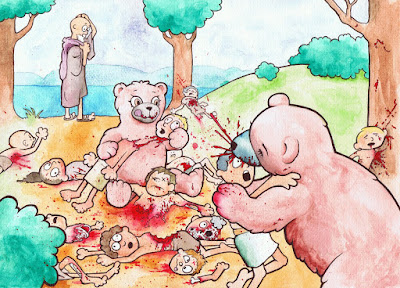 And there were scoffers in the last days. Oh, please!  Eternally butthurt Bawana Bob Thiel just CANNOT get over the fact that 99.9% of the Church of God members reject his silly nonsense.  While he may find the occasional conspiracy-laden radio host who has failed to do an internet search on the "authority," he still finds himself mocked and ridiculed.

The only people he has garnered is church-hopping African members who go from one Church of God, Adventist, or Sabbatarian group to the next depending on who gives is them the most money. This is an established fact that Christian missionaries have understood for decades, but not certain COG group leaders.

It may be of interest to note that part of the mainstream press in the UK covered some of my writings in 2018. They did so with ridicule and failed to mention that what we teach in the Continuing Church of God is coming to pass.

There are many scoffers during these last days.

The plain truth is that Bob Thiel IS a false prophet.  A self-appointed liar who has created the biggest mythology about his "Overseership" than any other COG leader out there today. And that is saying a lot considering he has stiff competition with Gerald Flurry, Ron Weinland and Dave Pack.

Many (mainly on the internet) have repeatedly and falsely called me a false prophet and said other bad things about me as well as the Continuing Church of God.

While that turns some away from looking at us, we understand that Jesus said this was to be expected:


10 Blessed are those who are persecuted for righteousness’ sake, For theirs is the kingdom of heaven. 11 Blessed are you when they revile and persecute you, and say all kinds of evilagainst you falsely for My sake. 12 Rejoice andbe exceedingly glad, for great is your reward in heaven, for so they persecuted the prophetswho were before you (Matthew 5:10-12)

We are not to turn away from true understanding of biblical prophecies, but rejoice in going through open doors to proclaim the truth while holding fast to the truth (cf. Revelation 3:7-13).

What "open door" has Theil ever went through other than at his "world headquarters" in Arroyo Grande?  Oh wait, I forgot, its those cartoons!  That is the "open door" that Herbert never had.  Who needs Steuben crystal and visits with world leaders when you can have some crooked bookcases and some really bad cartoon features. Being a prophet is such a hard job!

Would all of you scoffers PLEASE stop saying bad things about Bob!  Pretty please?
Posted by NO2HWA at 10:17:00 PM

I think Bob's critics envy his intelligence and the fact that he makes more money than they do without having to work for a living. Also, he has more followers than any of them have.

I keep waiting for him to try to entrap us. You’d think a fanatic like him would think to shave his head deliberately so we could mock him for it, thus bringing out the bears to eat us. I guess he’s waiting for a morning in the near future that he wakes up to discover via the mirror that he’s actually breathing fire.

After I dropped WCG like a hot potato 24 years ago I NEVER went to any of the splinter cults. The ONLY time I ever hear of them are through this blog & a few other websites that support and help victims of Armstrong's deception.

And let me add that the scoffers back in the day that asked "where is the promise of his coming" that was promised "soon" "shortly" with the "day being far spent" and 1 John 2:18 18 "Dear children, this is the last hour", were merely noticing it had not happened. It has not happened still but then if a day with the Lord is as a thousand years, then we can probably use an apologetic that "soon" and "shortly" don't mean what it would mean to normal human beings.

I idea that the noticers are being "deliberately ignorant" is also a bogus charge. No one deliberately notices ignorantly that something actually did not come to pass. Remember, prophecy, falsely so called is for the people of the times and not something thousands of years into the future which no one would care about or be inspired by.

Sure can happen! When I was about 10 I had a she bear deaconess slap me in the face. She told me I would obey her and respect her authority.

THIEL WROTE: "They did so with ridicule and failed to mention that what we teach in the Continuing Church of God is coming to pass"


MY RESPONSE : The only thing that Thiel indeed is "causing to pass" is PASSING GAS!

Ron Weinland used this bullshit on his dissenters. Of course nothing ever happened. It was all for domestic consumption.

Bob should be pleased when he is mocked, insulted and "persecuted" - Matthew 5:11.

If you scale everything related to the WCG down to the size of the CCOG, Bob's animations could be seen as an "open door" - perhaps equivalent in (scaled down) magnitude an AICF concert series...

Likatah!!!e a female Eric Cayman You will respect her author-tah