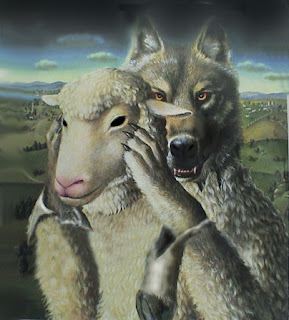 It is no different today in 2019 as we witness the lies of Bob Thiel, James Malm and others. Not a single one of these men are speaking on behalf of God.  No amount of zealotry or innumerable dreams can make these two legitimate disciples of the god they claim to follow.

James Malm believes his so-called ministry is such a dynamic strong ministry that when the two witless witnesses arrive they will take over his ministry expounding upon his teachings.

When these two creatures take over his ministry it will allow him to go to his selected "place of safety" where he and a few hundred of his followers will revel in extreme zealotry.  He also expects tens of thousands of people to enthusiastically embrace his zealotry. Malm has no intention of going to Petra where the deceived fool Bob Thiel will be settling in along with Dave Pack and Gerald Flurry.  Malm's god has told him that the new place of safety is Pella:

Further, Petra is NOT God’s prepared place, and I have never taught any such thing! On the other hand, there is most definitely a place prepared by God for his faithful.
In the first century God took the faithful to Pella NOT Petra, and it is very likely that the faithful will return to some kind of refuge camp close to the same Pella in our time.

According to the Chief Pharisee and certified lair, his god is seriously testing the COG at this time and you had better not reject them or you will not be going to Pella! God is sorely testing the church right now to deliberately weed out the unzealous.

Of course God can protect us where we are, but if God tells us to leave for another place through his two prophets, we had better obey Him! This is not a test of God’s power, it is a test of our faithful obedience!
This all about dividing the faithful from the disobedient by forcing people to make a choice to either obey or chose to disobey God. This is why it is so very important to warn the brethren of this coming test and to properly prepare them by expounding the sound doctrine of every Word of God so that they can make an informed decision;
The brethren must also be warned of things to come, so that when these things happen those who have made the wrong choice will remember the warnings and be convicted and turn to live by every Word of God during the period of their Job like correction.


That is unless his god selects him to be one of the two witless witnesses.  Can you imagine the hell Malm would bring to the world with his nastiness and pharisaical piety!  Most of humanity would probably welcome annihilation after listening to his preaching.

...I have repeatedly stated that this work is purely preparatory and is about preparing the brethren, regardless of corporate organization, for the advent of God’s two servants and the coming of our Lord by building a body of studies through the scriptures and expounding sound doctrine.
When God’s two are set up they will take over and they can make any needed changes.
I expect to go to the place God has prepared. I doubt very much if I will be one of these two; but who they will be is in God the Father’s hands alone. I fully expect our Lord to come well within the next 10 years, making the advent of God’s two and the onset of the tribulation probable in a year or two [as world trends and prophecy also indicate].
A few hundred will turn wholeheartedly to God now and go to the place which God has prepared and during the tribulation many tens of thousands will turn enthusiastically to godliness.
I have never made any secret of these things, it would be wise to at least read the material and get informed before making comments. I dare say that your amusement will evaporate quickly once this trial begins James

It is very convenient to call yourself "preparatory" and merely "preparing" for some event which pretty much is never going to happen as advertised. With the Book of Revelation being a failed first century prophecy, only meant during a time called "Of things which must shortly come to pass" and hang in there because, "Behold I come quickly", nothing the Churches or Self Appointed Prophets, Priests and Kings come up with to motivate the members is actually possible. While written with plenty of hyperbole and glitter, the Book of Revelation is not something to base one's life on today. Look at all the trouble it has caused over the past 2000 years already.

The books of Revelation and Daniel do disagree with the gospels which state Jesus will return unexpectedly, and at a time when life is happening as usual.
Did you ever study and come to any conclusions why the gospel of John (written in 90s?) refers to the feasts of the Jews, while Paul's letters and the book of Acts (written in the 50s and 60s) all mention them in passing, implying everyone knew what they were.
The best explanation I can think of that makes sense, is that the Gentile church had stopped observing most of the original feasts, so now they were known as Jewish feasts only - with the exceptions of Passover and Pentecost.

Here will be a real test for those attending COGS...

The "Place of Safety" will end up being LAS VEGAS!

TLA, I've wondered that same thing about the 'feasts of the Jews'.
Kind of like how I would refer to Muslim holidays, etc.--because I don't keep them myself.

"While these feasts had been reduced to the outward shell of ritualistic observance by the Jews who refused the one upon whom the fulfilment hinged, the Lord acts in wonderful grace, presenting Himself as the one who works until the true rest of God can be realised; the one who goes into death to bring us blessing and food, and who sends the Holy Spirit as source of abiding joy and refreshment! "

SHT - the writer you reference seems to ignore the records that many Jews including the Pharisees ended up accepting Jesus after His death.
The early Church was Jewish, and had many Jews in it initially. At some point the Gentiles dominated. It seems they made Jews feel unwelcome.
My question is when was the Gospel of John written. If it was written by the Apostle John, it would appear that the early Christian church dropped the Feast days during John's lifetime.
Another possibility is, it was written later by someone who had access to the personal accounts of the Apostles.

Dennis C Diehl said: "While written with plenty of hyperbole and glitter, the Book of Revelation is not something to base one's life on today. Look at all the trouble it has caused over the past 2000 years already".

Mr. Diehl, if I am not mistaken, I think you and Mr. Pack were at Ambassador College at the same time and maybe graduated the same year or a year apart. So, if you came to your conclusion about the book of Revelation by "pulling wires out of the wall", then it is my observation that there must have been something in that Ambassador college water.

What about the truth- at AC we all drank from the same spiritual water- open up the brain and pour in their version of the truth- no discussions and debates. What they said was wrong with this world’s educational system was effectively done to us.

4.20 AM
'No discussions and debates' is bully morally, the moral code which dominates all the ACOGs. Belief without discussions and debates is building a house on sand rather than on rock. It doesn't matter whether the beliefs are correct. They cannot stand up to coercive pressure. Members changing their beliefs after Joe T took charge of the church, is one example of this.

Christians are instructed to 'prove all things.' Christ reasoned with those who disagreed with Him. By contrast, the ACOGs tell their members 'believe what we say, or you will wake up with a horses head in your bed. Capiche?'


The more I read of Malm’s stuff the more obvious it is that his is as big a spiritual pervert as Pack, Flurry and Thiel.