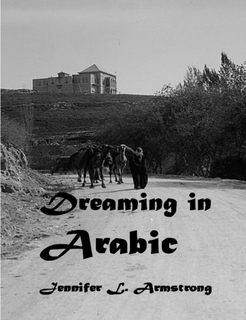 Jennifer Armstrong's book, Dreaming in Arabic is now available in book form.  Check it out here: Dreaming In Arabic


I grew up in the Worldwide Church of God, an organization labeled “cult” by most of mainstream Christianity. At the head of it, was Herbert W. Armstrong, a forceful personality, with a unique interpretation of scripture. I grew up believing that we in the Worldwide Church of God were the only true Christians in the world. My mother told me a story of how when I was a toddler in the stroller and we were passing by a large old church, I pointed and said “Man's way.”

The Worldwide Church of God took a lot of their beliefs from the Old Testament. Being young, I never really understood why some of the ancient laws were kept and some were discarded. I'm sure there was a reason and I'm sure it made sense to the adults. At least, I hope it did. I've never felt bad for being part of a group that taught Biblically unsound doctrines. I was a child and a child will believe in
Santa Claus if you tell them with enough conviction. But I do wonder about the adults and why they were so quick to let someone interpret the Bible for them. My husband, who is eight years older than me, said that it wasn't so much the doctrine that attracted him as much as the emphasis on righteous living. And there was an emphasis on righteous living. But unfortunately most people were not living
up to the high standards we taught.

I think another draw for a lot of people was the emphasis on prophecy. I grew up believing that someday, before a great tribulation fell upon the world, we believers would be taken to a place of safety where we would be hidden from the wrath that fell on everyone else. Herbert W. Armstrong had a radio show and a television show called The World Tomorrow where he preached out of Daniel and Revelation and gave his own unique interpretations. I think there were quite a few people who joined the church to escape the great tribulation.

It was believed that the place of safety was Petra, in Jordan. Mr. Armstrong would travel around the world as an “ambassador for peace” and one of the people he met was King Hussein of Jordan. The church had some sort of outreach to handicapped children in Jordan. Since Petra was in Jordan and Mr. Armstrong was a “friend” of King Hussein, it was taught that we would all fly to Jordan and stay in Petra for the duration of the tribulation. I have some vague recollection that at some point, soldiers of the world would surround Petra and threaten us all, but that heavenly retribution would strike them down. What was more critical to people was what they would bring to survive the years in Petra. One woman said she was going to bring two suitcases of maxi pads.

As a child, I once packed a small briefcase full of my favourite books and then carried it around with me, even if we went across the city on the subway, because it was said that we could be called to flee at any moment. One of my childhood fears was that I would come home from school and find my mother and younger brothers gone and that I would somehow have to make my way to the airport (by taxi, I suppose) or else I would miss the flight to safety. Contacting my dad at work was not an option. He wasn't a member of the Worldwide Church of God and therefore would have to face the tribulation. When it was preached from the pulpit that during that horrible time the guillotine would probably be restored as a form of punishment I resigned myself to my dad's inevitable fate. You see, my dad knew
too much. He had lived with a believing wife and would therefore have to stand up for the truth in the future time of persecution and would be punished for his belated realization that everything the church taught was true.

The Great Tribulation would be followed by ....

"I was a child and a child will believe in
Santa Claus if you tell them with enough conviction."

That's right. They will believe in god, too, if you tell them.

I wonder how many children would grow up believing in god if there was no one to tell them of his existence? Sort of flies in the face of the notion of "god's existence is self-evident."

Nothing like being proved utter fools as a complete embarrassment to the entire world with no excuse whatsoever.

How quickly the Armstrongists forget 1975 in prophecy. Or that book published in 2005 that the United States would fall in 2008.

Then there's Mystery of the Ages, published 1985, which said that Jesus Christ would return by 2005.

"And, secondly, to reveal—preserved in writing for us TODAY—what is to happen "in the latter days"—actually within the next two decades—THIS LAST HALF OF THE TWENTIETH CENTURY! (Mystery of the Ages, Herbert W. Armstrong, p. 298) "

It's in Chapter 7 near the start of it.