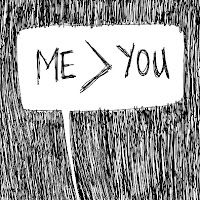 You never know what deep theological ramblings you will find coming from COG members.  Of all the important things in the world labeling people "Spiritual Bastards" seems to be important to some.    This classification by some Armstrongites is a convenient way to label all who disagree with them. You are the way you are because you are the child of unequally yolked parents.  Or the offspring of a believer and non-believer.  Or a person born out of wedlock.  You might be from an  incestuous relationships. Or, God forbid, you are the product of interracial marriage!  That is the ultimate abomination!

There are all kinds of ways some Armstrongites seek to deligitimize anyone who disagrees with them.  Sadly, that seems to be their goal.  To do as much as they can to make non members illegitimate and unworthy.  It is important in Armstrongism to be be able to label people as "the other'.  This deliberately makes them out of bounds from God's love.  By having 'the other' out there, it makes the Armstrongite feel special and called out above all others. God's chosen. Rulers of worlds. Gods to be.  Yuk!


What is a bastard?: Based on the above Bible helps, a bastard could be one of the following:
· Descendant of an irregular union
· Illegitimate children
· Person produced as a result of an incestuous union or
adultery/fornication
· One born out or wedlock
· Offspring of an interracial union

In a spiritual sense, a bastard is one who refuses to use God’scorrection to change or to be changed. He/she is one that issupposed to be of the Body of Christ, but is not a pure spiritualIsraelite – washed white and clean by the blood of Christ.Instead, they have become like an illegitimate offspring from awrong union. A mixed breed - like those that were the mixedmultitude that followed Israel out of Egypt – becoming thorns inthe flesh of the Israelites – causing problems and issues (Ex12:28; Num 11:4). These try and destroy the sons of light withtheir slanders and lies. From such, turn away. Origin of Nations: Spiritual Bastards

Yes, we may be "Spiritual Bastards" -- although I, personally attend Sabbath Services and will be attending the Feast in Idaho this year (as a result of several personal agendas, not the least of which is to...) -- even if we are believers, but at least we aren't committing idolatry.

Yes, idolatry. And we're not out actively practicing blasphemy. We leave that to the Armstrongists who claim the CoG7 are lesser than they are because the CoG7 doesn't believe in the idiocy of the provably wrong British Israelism, and, therefore, don't have false prophets like the Armstrongists do.

No, we don't claim to be gods to become God as God as God, which is about the most blasphemous thing imaginable. Actually, the normal person couldn't imagine it because it so so far beyond imagination.

And we don't even claim to be particularly sane, especially after being subjected to the immoral, unethical and illegal practices of the Armstrongist leaders. But we are quite sure the Armstrongists are insane within the crazy psychosis of la la land. What they believe is stupid and provably wrong.

So what is even worse is that they cause the spiritual Gentiles to blaspheme.

If any of the Bible is true -- and Armstrongists universally behave as if it is not -- then unrepentant Armstrongists who continue to commit idolatry and blaspheme the Holy Spirit will be thrown into the Lake of Fire to die forever, since Liars shall not enter into the Kingdom of God.

But since the Armstrongists are completely delusional and don't believe anything in Scripture, any discussion of their violation of the very core the Worship of the One True God, they are comfortable with slandering those who have a modicum of scientific understanding and the Armstrongists continue practicing the emotional extortion of telling us all, "oppose us and we will cause you pain"!