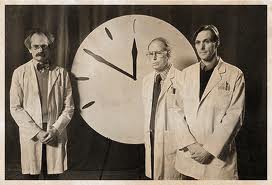 You would think that after watching 60+ years of failed prophecy go by while he has been part of the Church of God that Richard Ames would give end time prophecy predictions a rest.

With the hundreds of documented failed prophesies that Herbert Armstrong, Dean Blackwell, Herman Hoeh, Gerald Waterhouse, Rod Meredith, Gerald Flurry, and others have uttered over the years, you would think they would all stop making fools of themselves.

Fear mongering is the only way that the present Church of God leaders can keep a few faithful in their grasp.  The fear of the unknown is a powerful thing for cults to latch on to.

Ames has written a little screed for the the latest Living Church of God Commentary with the fear mongering title: Armageddon Postponed? Fifty Years After the Cuban Missile Crisis.

The only time Ames mentions Jesus is mentioned is when Jesus Christ comes back at the battle of Armageddon. One sentence in the entire screed is all that Jesus got.  Fear, death and destruction are in almost every single paragraph.

Fifty years ago, our world came very close to Armageddon, hardly more than a decade after General Douglas MacArthur had characterized the state of the world in his farewell address to the U.S. Congress: “Military alliances, balances of power, leagues of nations, all in turn failed, leaving the only path to be the way of the crucible of war. The utter destructiveness of war now blocks out this alternative. We have had our last chance. If we will not devise some greater and more equitable system, our Armageddon will be at our door” (April 19, 1951).

Since MacArthur’s speech, has the world devised “some greater and more equitable system”? No! Will Armageddon soon “be at our door”? Your Bible reveals a great prophetic climactic battle, popularly referred to as “Armageddon,” described in Revelation 16:14, when “the kings of the earth and of the whole world” will gather for “the battle of that great day of God Almighty.”   This present age will end with a climactic battle between the forces of good and evil, and the returning Jesus Christ—the coming King of kings—will win that battle (Revelation 19:1-21)!


Sadly, Ames gives more credence to the "doomsday clock" baloney than he does to resting in faith in Jesus Christ.

Even those who do not take the Bible seriously admit the danger of nuclear catastrophe. On January 10, 2012, The Bulletin of the Atomic Scientists moved the minute hand of their symbolic doomsday clock one minute closer to midnight.  They announced, “[F]ailure to act on the Comprehensive Test Ban Treaty by leaders in the United States, China, Iran, India, Pakistan, Egypt, Israel, and North Korea and on a treaty to cut off production of nuclear weapons material continues to leave the world at risk from continued development of nuclear weapons. The world still has approximately 19,500 nuclear weapons, enough power to destroy the earth’s inhabitants several times over.”

The Bulletin announced: “It is five minutes to midnight.”  The scientists concluded their announcement with this sobering warning: “The Clock is ticking.”


Sadly, the Church of God WANTS that clock to be ticking.  Without that fear mongering tool they would have to talk about Jesus Christ more often and we all know that is NOT a good thing to do.  Jesus is too syrupy and effeminate for them. Butch Christ is more manly and makes for a better kick-ass savior at the end of the world.

Yep. They make it impossible for Christian families to live the blessings of a Spirit-filled life by indulging in the figurative equivalent of deliberately forcing Peter to focus on the wind.

I nearly developed an ulcer in the months leading up to 1972-75, and prior to learning moderation was up to about 3 quarts of Colt 45 per night. That was directly due to the fact that our wonderful "spiritual guides" were deliberately keeping us on the very edge, wondering each day if we and our families would qualify to be worthy for Petra. This type of teaching most certainly is not reflective of God's love. Crap! These idiots would probably have the prodigal son furiously attempting to qualify for his father's forgiveness, and yet read what Jesus actually taught in that wonderful parable!

And in particular he never mentioned that the LCG Headquarters would also be in the storm.

If he wants people to fear something, how about fearing what God will do to the LCG... and what has already happened to it.

The LCG as well as the approaching storm front.

Who cares what atomic scientists think about politics? They're atomic scientists, not political scientists! They might have something to say about the Higgs boson but they have no special insight into politics.

Yet Ames and his ilk will seize on any straw that seems to bolster their case. Ames should be ashamed of himself and stop his fear mongering. But he isn't and he won't.

I offer my thanks to this site for reminding its readers of his perfect track record of failure.

"Sadly, the Church of God WANTS that clock to be ticking"

Yep HWA and his clones screaming doom and gloom every time a news item mentions a calamity or predicts the apocalypse with every storm or quake shows how they are really eager for terrorist attacks, natural disasters, financial destruction or a nuclear holocaust being unleashed on America! They really should be careful what they wish for. They just might get it.....

They seem to get some twisted adrenaline rush out of catastrophe just like Charlie Frost who gets annihilated in Yellowstone in 2012!

The clock hands have often been set back, too. The COGs never seem to point that out. With their emphasis on the hands always being moved forward, it would be about 10 minutes after midnight by now.

Just seven years later, with the Cold War having fizzled, it was pushed all the way back to 11:43.

Nothing about that on The World Tomorrow, though.

Is there danger in the world? Yes. Is the clock an indicator of prophetic fulfillment? Never has been before, why should it be now?

There are better sources of information than the literature of the COGs, to be sure.

About that doomsday clock... you might be making unwarranted assumptions