E. W. King Lies That Israel Was "Surprised" By His COGSR Feast Site 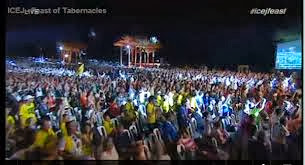 Eric King has up a bizarre entry today on his blog.  He for some reason seems to think that Israel was highly impressed by his "feast site."

King goes on to report about the thousands of Christians gather in Jerusalem every year to celebrate the Feast of Tabernacles.  What King conveniently ignores is the fact that these groups are NOT Church of God related groups.  They are evangelical Christians and Messianic Christian/Jews.  99.9% of them have no connection whatsoever with a Worldwide Church of God splinter group, include Eric Kings minuscule personalty cult.

Reading Kings entry you get the impression that it was HIS group that Israel Today and other news agencies were reporting on.  It wasn't.  Just one my lie by one more splinter cult leader.

Posted on September 25, 2013Every year, thousands of Christians from a round the world ascend to Jerusalem to take part in the biblical Feast of Tabernacles, known in Hebrew as Sukkot. And this year was no different, despite mounting regional instability.

The overwhelming presence of Christians at this time of year is now a common occurrence. But many Israelis are still baffled by the phenomenon, unsure what to make of so many foreigners taking part intheir holiday and expressing such outright love and support for theirnation.

The Times of Israel has a good write-up about how bizarre a spectacle this is for the average Israeli. But, the author also encourages his countrymen to cast aside any suspicions and see this Christian involvement in the Feast for what it is:

“It is much less complicated than many Israelis think. These Christians have come from around the world to bless Israel – ve-zehu (that is all). They believe that God loves the Jewish people and has a plan for their nation, and feel a deep spiritual obligation to show their unconditional love to the Jews.”


During this time, Israel Today spent a day with one of the Christian Feast of Tabernacles groups as it visited the home base of the IDF’s Givati infantry brigade. We asked the young soldiers at the base what they thought of the Christian worship, dancing, and general outpouring of love.


Just in case King pulls a Dave Pack and scrubs his lie off his blog, here is a screen shot of it. 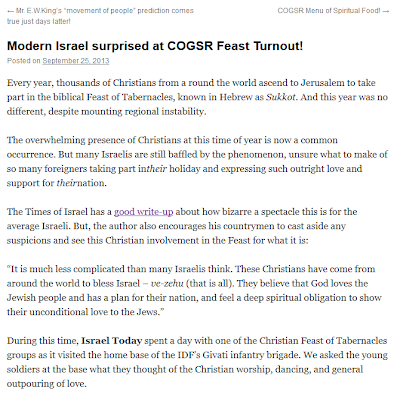 RE: Picture up top:

NOW THAT'S a Feast Site. That dwarfs even Poconos, Dells, and Ozarks.

(I wrote the NOW THIS IS A FEAST SITE comment)

How does he excuse that title?

Does E.W. take his wife and baby to Jerusalem for sukkot each year? I have a hard time believing he has any "members" beyond family "members." Yes, you can slap a fictitious business name on a family and pretend they're a corporation. But does he really think anybody in Israel noticed? He's just another tourist! Nobody was "surprised" by him or his family, unless they made a spectacle of themselves. Why is he desperately trying to take credit for inspiring some article to be written that clearly has nothing to do with him? All those other messianics did not go to Jerusalem because of E.W. and his living room COG. The state of Israel did not notice him. Ha'aretz did not notice him. The other messianics did not notice him. What a weirdo.

It would seem to be quite a stretch for him to even include himself in this, unless he did actually participate in the Feast observance of one of the Messianic groups, rather than indulge in his own separate feast.

These guys, as a group are bullshit artists. There is no other more appropriate word to describe them. They will never cop to having been caught or exposed even in the face of the most blatant of all lies. Like the Energizer bunny rabbit, they just keep on going, only the acid with which their batteries are charged is the inspiration of their role model, the father of all ACOG lies, Herbert W. Armstrong.

But, did they have Fred Waring's Pennsylvanians perform there?

Did they have an Elephant Train shuttle?

Did they look up and see Garner Ted wiggle his plane's wings to say "Hi!" as he approached the Feast site while scores of ladies below cheered and dreamed of Ted shagging them rotten?

Did they have Herbert Armstrong to preach while shaking his jowls and pounding the lectern while the sound system almost blew out your eardrums when in the midst of one of his tirades shortly before the baskets were passed?

No?
Case closed, then.
Only the REAL WCG could provide the BEST FEAST EVER!

That "Biblical Feast of Booths" is for the birds.
I'm so glad that Mr. Armstrong invented a WHOLE NEW "Feast of Booths" .... which has little to nothing Biblical about it .... But, at least, it's always the BEST FEAST EVER!

And the great part is, that the UCG and other HWA-Worshipping churches carry on the tradition!