Dave Pack: His "god" Is Sending Angels Incognito In Order To Test His Followers 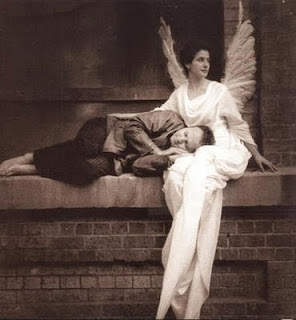 Can you imagine how difficult it is for Restored Church of God members to ever truly measure up to Dave's high standards?  Even though these standards are not God's standards, Dave feels that his members need to be ready to be "proved."  In order for this to happen Dave's god is going to send angels incognito to see if the RCG members will take them in.  It is highly likely that they won't since they will not even help the homeless and hungry people begging at the Giant Eagle several hundred yards across the street.

One thing GTA had going for him in the late 70's was that he saw a need to care for the homeless and hungry in Pasadena.  When Herb had his melt down and closed Pasadena, Ted thought that the Student Center should be used to feed the homeless.  The proverbial Armstrongite caca hit the fan.  Ted soon found himself homeless and on his way to Texas.

This is what Dave says to his followers:

People would be horrified to think they turned an angel away. Even though the angel didn’t need any of the things that it might appear to when it came as a human being. You see. You’d be horrified to think “Ohh, I turned an angel away? Well, then how much worse would it be to turn a son of God away? Nobody would turn an angel away. No one would turn Christ away—Lord, when saw we Younaked, or hungry, or a stranger? And He said, Inasmuch as you did it to one of these, the least of my brethren, you did it unto Me. [Paraphrase, Matthew 25].
Do you realize God could test you? And He says so right here. If there are no strangers near you that you would need to take in, He might actually send an angel to test you. There can be no other reason. Angels don’t need beds. They don’t need food, or water, or clothes, and if you said no to them, they would just fly away. So that would be a problem—but if you say no to a little one, or “the least of these, My brethren”—Christ said, “You did it to Me.” Nobody would ever say no to an angel, and that’s better than saying no to one who Christ said was the equivalent of saying no to Him.


So, you may have never thought about that verse, but that’s the context, and it’s the chapter, that it follows, quoting Haggai. And now that we understand the resurrection of the dead, a lot of people I was talking to after services were just floored. They had never thought about thousands of people with enormous needs.
God will test you, even if there isn’t somebody with a need. If you live in outer Slobovia, He might send an angel. I don’t think there is such a place. Wherever it is, it’s outer…[laughter] I think maybe more of you are familiar with inner Slobovia…but I was referring to the outer one.

Is there even the slightest thread of consistency between this teaching and the way Dave criticized everyone for helping victims of Katrina?

I think it was Lower Slobbovia, Dave - as invented by cartoonist Al Capp in about 1946.

Dave, the more you proclaim how much you know about so many things, the more it is evident you don't know crap about crap.

Shut up, will you?


Sorry, Stranger, but I already gave everything I had (cash, savings, house, retirement plan, personal possessions, etc.) to Master Pack.

Go ask Dave Pack if he can give you any Third Tithe assistance, or if all the so-called “excess Third Tithe” at the end of the month has already been automatically swept into his general bill paying account.


The problem with this is that Dave's god is the Devil, and his demons will just send more lazy moochers, con-artists, sexual predators, etc. If any of these fallen angels end up on your doorstep, tell them to go get a haircut and get a real job.


This sounds like such an obvious trick question test.

The correct answer is obviously that everything belongs to David C. Pack, and so it would not be right to give any time, help, food, lodging, money, etc. to anyone else. It would be like stealing from Dave. It would be your own fault if Dave finds out about it and yells and spits at you. You ought to know better by now.

Translation: I have instructed the ministry to visit you when you least expect it to determine who among you is reading and contributing to the discussions about my beautiful mind on BannedHWA.

Ha! I've got to give it to him, though. As other pachyderms do, Pack does stick to his own territory, and does not wander down near the Giant Eagle where he might find homeless people in need.
Like an elephant, he seems to never forget those who have crossed him.
He likes to portray himself as being joined at the hip[po] with Herbie, and alters Herbie's words to do so.

People who have visited Pack's zoo north of the Giant Eagle would do well to remember that it's Pack who's the animal in the cage, and that they are free to leave.

Dave is expecting a personal visit from an angel to test his resolve and faith and prepping the folk for it. Gold plates to follow from the Angel Baloni

Sorry, but I forgot to mention other pachyderm-related Pack issues.

Davey Pack has an issue in common with many other COG leaders- known scientifically as, "Elephantiasis of the Ego"

In other words, he's got too much junk in his trunk.

Plus, with his huge ears he may think he can fly to any Place of Safety- maybe all the way to Mars!
(NASA will call him the "Dumbo 2" as he crash-lands into the piranha pond on his own zoo compound.)

Shortly after, the Giant Eagle will offer packs of "unknown meat" as chum/bait at 'special pricing' for fishermen - even though Dave considered himself a "fisher of men"

Where's Tom Mahon on this?

Please no Tom Mahon here! Besides, the prig is probably worshipping at his Mystery of the Ages altar this very moment chanting Herbert Armstrong's name.

Dave provided a comeback to those who refer to COGcritics as anti-COG atheists and agnostics: How do you know we're not angels sent to test you?

Does Dave teach anything other than speculation these days?

Dave's wolf Pack mentality is clearly showing here. What I find horrifying, is that Dave says he is the ONLY ONE who can operate that switch to determine which is witch, as if the true devil could never tell a lie!