Where In The World Is My True Church? 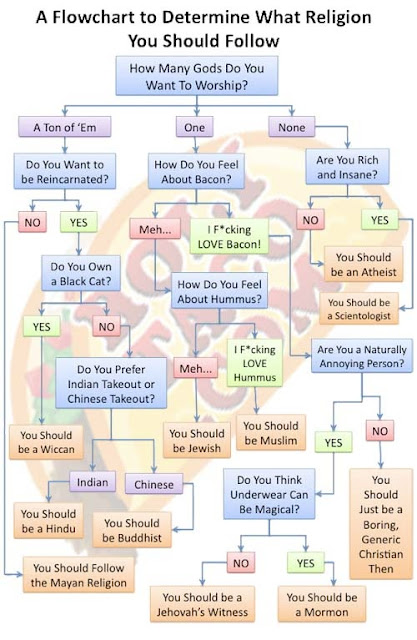 Love it! Congratulations to whoever thought it up!

Well, I believe someone on another thread coined a new expression, mentioning the "tenants" of Armstrongism. As it turns out, that would be a valid descriptive for those who live in Armstrongism! The tenants are the members!

Several years ago, I came to realize that there probably are some people who observe the tenets of Armstrongism, who almost by accident are an anomaly to that movement, in that they are actually Christians, who are indwelt by the Holy Spirit. I feel quite certain that my first mother-in-law was one of them. But, I've gotten to know enough others, who attend Catholic or Protestant Churches, and even some other Sabbatarian Churches, or who practice their faiths outside of a church community, who are shining examples of Christianity. The "body of Christ" just isn't some exclusive trade name, referring to the members of one corporate group. Claims of exclusivity belong more properly in the advertising field than in the Christian community. We've had an opportunity to see how this exclusivity concept has been used to manipulate and enslave members, and to coerce behavior that is anything but Christian, even to the extent of holding people hostage to ridiculous fals prophecy.

How do you feel about Bacon

The chart assumes choice. Typically people are born into a certain culture and religion, and it's very difficult to break free. Even if people intellectually reject their initial socialisation, it takes a life time to break free emotionally. That's the significance of Star Trek Voyagers 'Seven of Nine' character still retaining some of her Borg implants. One can never completely escape the Borg programming.
I have noticed that in many of the comments on this blog. People deny it, or are not conscious of it, but the WCG mindsets still show.

Since all religions operate as palliatives, this makes perfect sense. Which conception of what happens when your life ends (instead of what in all probability really happens) works best as a palliative for you? That's the one you should pretend that you know is "truth." I guess as a species, we hate not knowing so much that we prefer knowing that we're lying to ourselves.

This is exactly what my parents did when they signed up for Armstrongism: they simply selected a palliative that helped them cope with their existential fears. Why they both needed that but I don't, I can't explain, but without their active indoctrination, which was also done to help them cope with the extension of their fears, I'm quite sure I never would have gotten mixed up in any religion. They make so little sense. And the more of them you consider at once, the more obvious it is there's no basis to think any one of them has any more truth, or more to the point, any less falsehood, than any other.

If there are "tenants of Armstrongism", I suppose that makes HWA a slum lord.

But, onward and upward to the OP-
I join with Allen in congratulating whoever thought up the flow chart!

I can imagine some additions, though, possibly including:

* "Do you like to attend church where there's a Starbucks and you can sip coffee while watching sappy fake tearjerker testimonies on a jumbotron?" --> Yes No...

* "Do you like when your church's parishioners roll around on the floor babbling incoherently, and then get high-fived and be seen as extra-holy for doing so?" --> Yes No...

However, having some history in the religious shack that Armstrong built- and the plethora of it's splinter groups- I can imagine almost endless Armstrongist flow chart possibilities...

* "Would it bother you if the leader of your church's favorite hobby was raping his daughter" --> Yes No...
(Now I'll admit this is rather Trumpian in nature, given that Trump stated, "I could stand in the middle of 5th Avenue and shoot somebody and I wouldn't lose voters.")

* "Would you prefer the leader of your church had a double dose of delirium and made false claims about his education?" --> Yes No...

* "Do you like beer enough to insist the leader of your church have a nickname like, "Six-Pack-Slurry"?" --> Yes No...

"Do you prefer the leader of your church make constantly failing and changing apocalyptic predictions while imprisoned for tax evasion?" --> Yes No...

"Would you like to attend a church that argues about who owns a few cows- to the extent that thousands of people leave and create another major Armstrongist church's splintering?" --> Yes No...

"Would you like the leader of your church, in 1996 to promise elections and transparency (to Ruth Tucker and Hank Hanegraaff) in order for the church to be de-listed from the Hank's cult list, yet never deliver on those promises even though it's now 20 years later?" --> Yes No...

"Would you like it if the leaders of your church protected serial sexual predators and harassers, and also blamed and punished their victims?" --> Yes No...

"Would you like the leader of your church to self-identify as the Bible's "That Prophet" and pay millions to acquire the rights to Armstrong's books, and then find himself as a major figure in a plethora of Bible verses?" --> Yes No...

Heck, this is just the tip of the Armstrongist iceberg, but I'll stop here because my arthritic fingers are sore. Perhaps some others so inclined will add to the flow chart.
BTW, thanks Dennis for posting this, it's a hoot!

Being in a sect of the Cult of Herbert Armstrong Mafia seems to be a lot like being married to Angelina Jolie.

At first it's all so new, exciting and glamorous. You settle in expecting a long term relationship, not just with her, but with all the strays she's picked up as 'her children'.

Now you should have realized that something was wrong with her from the very beginning, especially if you joined up when she was Global. There was that nasty separation and divorce from the WCG and you should have known that she was narcissistic and eccentric from the get-go, but you were blinded by what you saw as her more wonderful attributes because she was 'the one'.

But she wanted to be independent and let you pay for it. She's 'mental' and unstable, unreliable, but the Adventure! Pushing out to new frontiers. She seems so exciting. You sort of have to ignore her constant criticism and the fact that she reveals secrets about you to the other 'family' members. Sure, she puts up with your drinking, but push comes to shove, she'll disavow you publicly and use the alcohol as an excuse (even though she's quite the drinker herself). She makes you feel guilty, even though you haven't done half the things she's accused you of (remember those painful Spokesman club evaluations by the overall evaluator). She thinks nothing of revealing YOUR secrets while keeping her own. And she's not above abusing the children while you have no say in the matter.

And after all that is said and done, you have to know that if you don't do and say absolutely everything she wants and let her do anything she wants (and even if you do), it's going to end in a nasty divorce: You'll be disfellowshipped, accused rather vaguely of nasty things which you may or may not have done.

There's no defense against her. She gets what she wants and dumps you when it suits her. You know she's nuts, others have the proof and you can offer yours, but no one will listen to you because she has the influence and all the apparent glamour.

The most horrible thing is that you should have known from the very beginning. The signs were all there: The immorality, the lack of conscience, the psychopathy, the lack of ethics, the penchant for collecting expensive baubles not worth spit (on your dime), the preoccupation with appearance with no thought to substance, the unfaithfulness, the rebellion. But you ignored all that and you ignored the warnings of your friends, neighbors, family and business associates and plunged onward.

Sure, decades ago when she was a lot more attractive and not so gaunt and sick looking as she is now and when people didn't know as much about her as they do now, you could probably be excused for hooking up with her. But now? You were a fool and you really should have known you were a fool -- but you wanted what you wanted and you were willing to tolerate the worst bad behavior knowingly. But the info was out there on the Internet and even if you looked, you didn't pay any attention to it because your mind was made up.

And now, you want us to be accepting and tolerant.

And we say, get over your addiction and move on. We're willing to help, but only if you admit you are wrong and are able to accept the truth.

Good luck with your divorce....

7.52 AM
With all those kids, I'm surprised Brad stayed married to Jolie as long as he did. After all, what a crappy lifestyle that must have been.

Don't bring Ms. Jolie into this!
It's more about Kevin Bacon, or a well-trimmed Mr. Porterhouse of untrimmed sermons.
(heck, that's like Waterhouse and Portune rolled into one!)

Thank you for your very logical, and I'm sure inspired "choosing the right religion " flow chart.

At last I have a means of finding the previously hidden spiritual meaning for my life. Too bad it wasn't available to me 50 years ago. Better late than never. So many choices!

And Black Ops Mikey, thanks for your tale of Angelina and Brad. I didn't know he was ever a part of "the work". It is amazing how we can be so stupid, and know it, but continue in it. The ditch is deep.

Clarification: Brad Pitt was never any part of any ACoGs. He did look at Scientology briefly and Buddhism. No, the posting comment was the analogy that a church is like a woman and an ACoG is like the woman Angelina Jolie.

It could have been Jezebel, but she hasn't been connected with a modern eye candy actor recently....

BOM,
Sorry, I stretched your Angelina metaphor a bit too far. I didn't assume that Brad was a part of the COGs, but how about Billy Bob?? Probably not the best spiritual leader, but a great Bad Santa! To be honest, there may not be much difference.

My post was intended to compliment you, and say "right on".

File for divorce and get the hell out!