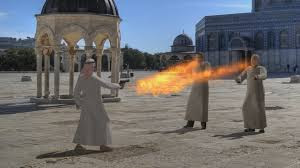 
These two anointed ones all apart of this same golden lampstand that is with mr. Herbert W Armstrong!

Only one Church - the worldwide Church of God!

Since Zerubabbel is listed as one of the anointed ones, mr. Armstrong fulfilling this end time type, and since God only works through one man at a time, the second anointed one must be the main of the two witnesses!

Apparently one of HWA's assistants will also come back to life to stand next to HWA as the troll the streets of Jerusalem for a few days.   Far too many believe this to be Garner Ted.  That is why he needs "cleaned up."  There can't be any whoremongerer calling down fire from heaven when he has his eye on some nubile middle eastern woman.


If you listen to Gerald Waterhouse's sermons you will find that the second witness only gives witness to the first Witness! The Joshua the high-priest type mentioned​ in Zechariah 3 and 4 was an assistant to mr. Armstrong! He will give witness the main Witness! He was there!

But the second Witness will need to be cleaned up first.

The entire world will soon be worshipping at the feet of Herbert.  As ususal,, Jesus is no where to be seen.


But notice worldwide Church of God under Herbert W Armstrong is the spiritual Temple that Jesus Christ will return to! Before mr. Armstrong the great Mountain Babylon will be made low. So when Jesus Christ returns with his bride his church Babylon will be stopped. Need Revelation 3 and verse 9 and read how the synagogue of Satan or return to worship God at the feet of God's apostle mr. Herbert W Armstrong knowing that God loves him​.

Not some other Church but the church that Christ raised up to Herbert W Armstrong called the worldwide Church of God! That is the only lampstand the candlestick that is here today.And it will be the one that continues into the world tomorrow!

There is no candlestick today. No lampstand.  No two trees. No prophet.  No apostle. No witless witnesses.  The "worldwide" Church of God is dead.  Hundreds and hundreds of splinter groups being lead by liars and false prophets who enslave their members with legalistic bullshit.  That is no legacy of Herbert Armstrong to look up to.
Posted by NO2HWA at 8:32:00 AM

who ever writhe this article must be on marijuana or ace. We do not know who will be two witnesses and why mocking it who ever will be will be.

Hello,
This is Samuel Kitchen, and this website is using an excerpt from my post on Facebook on the subject of the Two Witnesses. This website is dissident, and hostile towards Herbert Armstrong and the Worldwide Church of God and the truth of the Bible.
In my original post, I quoted the book of Zechariah. I was explaining how Herbert Armstrong fulfilled the zerubbabel type and how the Church lampstand is with him. I am speaking about the "current" Philadelphia Era of the Church of God. There is only one true body of Christ, one true Church- and that Church has been given a name "the Worldwide Church of God. And that lampstand was given to Christ's apostle, Mr.Armstrong. This era rose up through his efforts by the Living Christ!
And it continues today through those of the spiritual body, who are daily being led by Christ through the Holy Spirit. They are not apostatizing. They are not throwing God's restored truths away, or watering​ them down to fit in or to gain more members from the world. They are holding fast.
The point I was making, was that God works through one man at a time! God speaks in the book of Zechariah of 2 annointed ones! Mr.Armstrong is one. The second annointed one is the first witness! Today this man has been in training. His ministry begins at the beginning of the tribulation.
Now what about the second witness?
The Church has believed that the second witness was pictured as Joshua the High Priest of Zechariah. He was called to be a minister in God's Church but needs to be cleaned up! And this Joshua is pictured as being an assistant to Zerubbabel, or to Mr. Herbert Armstrong.
I was not saying HWA was one of the Two Witnesses. Nor was I saying GTA was the second witness!
I was saying that the scripture speaks of two annointed ones, and God speaks of an assistant who, according to Mr.Waterhouse, must give witness for the main witness, and if he was an assistant to Mr.Armstrong HE WOULD KNOW WHETHER OR NOT THE TESTIMONY OF THE FIRST WITNESS IS TRUE OR NOT!
So what I was saying, is that there are two witnesses, who are WITH Zerubbabel, and apart of that same Church-The​ Worldwide Church of God (a spiritual organism) the very same LAMPSTAND that God says is hanging with the APOSTLE, not letting loose of what was taught! Just one church- the Worldwide Church of God.
Not another, who has gone OUT and started another organization and who is using a different name and are trying to make a name for themselves.
Christ tells His Church to hold fast and that includes the name HE gave His Church. Let's not deny HIS' Name​, the name HE gave.
And of course, I speak of the body of Christ and not a corporation.

Samuel Kitchen, Nobody On This Website Gives A Rats A** About Your Wacky Beliefs!

the word "church" comes from the German word for CIRCLE, which is where the pagans and Druids worship...like Stonehenge....any "church" has nothing to do with the Creator and His Son.