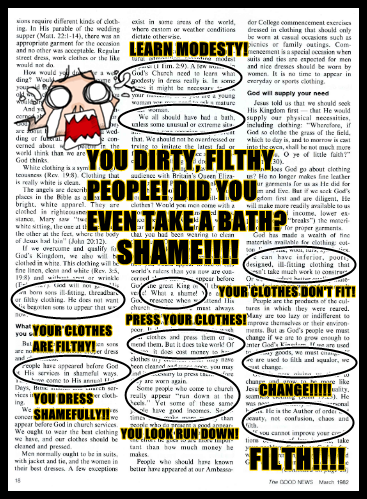 Really bizarre! A bottom-feeding organization in which the leader actually calls his followers “dumb sheep” is outraged by how they look and smell when they show up!

I’ve commented before that there were some folks who had been in such poor conditions prior to their Armstrong experience that, incredibly, Armstrongism improved their life conditions. Even though this abominable Good News article (unbelievably from so late as 1982!) comes off as being so cruel, it’s possible that for some, this might have had the same effect as a finishing school.

The ministers were constantly complaining about clothing, hair, and grooming. But, on the other hand, we had a guy with a horrible BO problem that just about gassed us all out at one of the AC dances. A couple of us chipped in and bought him some deodorant, and left it in his student mailbox. Our solution was subtle and tactful, unlike this GN rant.

Vanity vanity all is vanity.
Nothing new under the sun.

This is still taught to this day.
Maybe they should have reverted back,to a bell being rang out as they enter the room. So then all the shoddy dressers and the great unwashed can hide away from the hollier than thou's, as they walk past yo their front pews.

When I was in the US Army ( mid 50's)we had a solution to those whose BO would rival that of a skunk...called the GI shower for want of a better term....a bar of good old laundry soap, applied with an old fashioned scrub brush upon the stripped offender by several more than
willing applicators. One "treatment was usually enough. OUCH!!! for sure ...but SO effective!

The ultimate in disgusting, filthy, dirty and unclean ... is someone violating their own daughter. HWA was the champion low life.

Compared to some attitudes and behaviors, a skunk is a pleasant smelling creature.

Funny now that BB has humbly shed his monicker it is even more apparent when he comments.

I remember growing up attending the United Pentecostal Church a local preacher was bad about calling people out in the congregation and telling EVERYTHING about the person put on the spot so everyone knew the individuals past sins. He embarrassed the wrong person one Sunday evening and that person kicked that preachers Ass in front of the whole assembly.