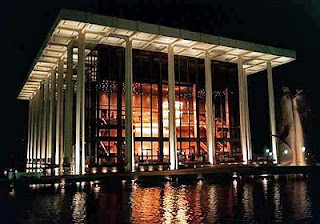 While nations are rioting in the middle east and killing Copts, people are dying of starvation in Africa, and people are homeless in Los Angeles, God seems to be more interested in answering the prayers of COG members visiting Pasadena.  I guess we all quickly forgot that God actually  lived in Pasadena for many decades while Herbert Armstrong was alive.  God had a house here remember (see above.)

A Cog member was visiting Pasadena and wanted to see inside the Auditorium.  It was locked.  He saw a man go inside ignoring them  So he prayed a prayer that God would allow them to be able to go into the Auditorium.  After a loud crash of thunder and angels singing, the Auditorium man reappeared and invited them in and let them roam freely.

I took extensive photos of the entire campus including, of course, the famous
Auditorium which was closed. We decided to take one last walk past the
Auditorium before leaving and noticed a man entering a side door. We wondered if he would let us in to see it ? he saw us but then went inside. I said a very quick prayer asking God to allow us in if it is His will. As Duane and I walked toward the door the man popped outside and waited for us and we walked toward him, introducing ourselves and asking if we could have a look around? Duane explained his extensive time at AC and that I was a visitor from Australia.

The man, Doug Huse, introduced himself as the General Manager for the site
(he is mentioned here: http://theambassadorauditorium.org/protectambassador.html)
and said we can have a look around

Then after heading to Mountain View Cemetery to worship at the grave of HWA and Loma they decided to look for Herman Hoeh's grave.  They couldn't find it.  But, prayer worked once again and God made Hoeh's grave appear before them.

We eventually found Herman Hoeh?s grave. It was difficult to find and I almost
gave up but said a little prayer ? Duane found it a minute or so later!

The real miracle was that there wasn't a rat in the reflecting pool, like the last time.

Did Joe Jr used to swim in the reflecting pool??

The Ambassador Auditorium was sold to Harvest Rock so there shouldn't be a rat swimming in the reflecting pool any more.

The little rat is a multi multi millionaire financed by the tithes, offerings, building fund contributions paid by all of our parents. Our parents worked very hard and made many sacrifices so the little rat could be super rich.

What a load of shit GOG people carry around with them!

Let's see, gawd wanted them to get inside the "temple" so they could have a look at what the average Joe Blow paid for from his blood, sweat and tears, only to have it sold to another set of morons, and the profits being given to junior to be used on his selfish pursuits and high life style while Joe Blow continues to line junior's pockets with more loot. Then, gawd directed them to go worship at the dead feet of more morons at the grave site. Is this person starry-eyed or just plain stupid?

"Is this person starry-eyed or just plain stupid?"