Dave Pack: HWA Being Resurrected So He Can Come Back and Flatten Jerusalem So Christ Can Build The New Jerusalem 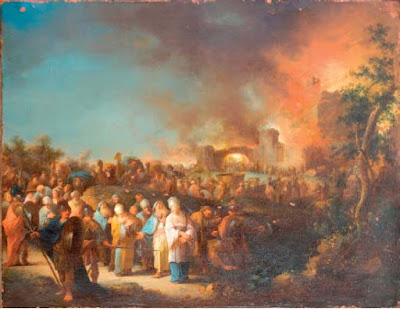 Things are getting crazier and crazier in Wadsworth as Dave Pack sinks further into mental delusions. With over 8 decades of absolute absurdities uttered by Gerald Waterhouse, Rod Meredith, Gerald Flurry, Bob Thiel, James Malm and Herbert Armstrong; Dave Pack is putting them all to shame.  Decades of false prophecies and outright lies have resulted in the delusional mind of Dave Pack.

In a previous post I quoted Dave where he said Herbert Armstrong was going to be resurrected first, above almost all people in human history.  There is a reason for that.  Herb is coming back early so he can destroy Jerusalem who is the Great Whore of Revelation...according to Dave.  HWA's power will be so incredible that the will wipe Jerusalem and all of its inhabitants off the face of the earth so that the New Jerusalem can replace it...with Dave walking up the steps of the new temple to greet Jesus.  Of course this all happens after Dave and his members go to Jerusalem several years earlier and save it and its inhabitants from the wrath of Satan.   Sound crazy?  It only gets worse.

First, let me tell you what it is and why Mr. Armstrong is tied to it. That “mountain” is the seventh resurrection of the Holy Roman Empire that Jesus Christ comes and throws down, ultimately destroys. Remember, we go to Jerusalem and we save Jerusalem from all nations of the world gathered against it.
Now…I have to bring Daniel and Jeremiah and Ezekiel and more of Isaiah, coming in a sermon in four weeks, but that great mountain, which, in his life time, was probably more like the State of California going against him…It isn’t America…It isn’t any other country…But apparently, the man to whom God revealed the sixth resurrection of the Holy Roman Empire is going to be the one who personally deals with the seventh one. I know of no other way to explain it. He apparently is going to flatten it…and using others, no doubt, and angels. If there’s some other way to take it, I don’t know.
And then he’s going to bring forth the Headstone, as the Chief Administrator. I believe Elijah’s task…As I’ve explained…he does a different thing before and after. He works with the nations of Israel. I understand that. But he will then introduce—to the entire world—Jesus Christ. That’s why three verses after saving Judah, and I believe Mr. Armstrong…You can understand why he would have to come back well in advance—get back into context. And you can understand why, at the end of the book of Haggai—you’ve been chosen for a time when I shake the heavens and the earth—at the time Christ comes back to His Temple—and “I’m going to throw down the kingdoms, the thrones and the armies—the strengths of the heathen—and I have chosen you” in that context. It’s impossible to misunderstand.

And this becomes…By the way, now that you understand, there’s another great world government…not world government…we’ll call it European…but, the Vatican reaches all nations of the world with Catholics and others so that Mr. Armstrong…someone…is going to have to deal with and throw down and flatten. A great mountain that gets flattened.

It’s interesting. When you look at the description of Mr. Armstrong, there in the end of Haggai, and the time that God is bringing him back to take down…among many other things, to take down the seventh resurrection, you think of Isaiah 2 and Micah 4. What’s the biggest thing on God’s mind when He sets up His government? He’s going to teach the nations to learn no more war. They’re notgoing to learn war any more. He’s got to stop it.

This week, the Russians announced a new missile called “The Son of Satan.” The whole world is trembling as they read about this weapon. One single missile can carry ten warheads. Each of those warheads over 1,300 times more powerful than what hit Hiroshima. And it can independently target…With a single missile, it said, we can wipe out France…Wednesday and Thursday, we can wipe out the entirety of Texas, one missile.

Each warhead—ten warheads—750 kilotons. Hiroshima was hit with 15…Multiply that times ten. 7,500 kilotons in a single missile and they think they can get it up to 20,000 in one missile that flies so fast you can’t track it or stop it…And Hiroshima was 15. So divide 15 into 7,500 kilotons and you get 1,333. The article I read said they think they can, eventually, get 20,000 kilotons on each of the ten warheads—not the missile. So, they can get 200,000 kilotons on one missile that will split ten ways. They’ll erase all life on Earth…That’s just this week.…And they have super systems. So, in Poland and Romania on Thursday and Friday…And the Russians are upset a missile defense system goes up. Shock of shocks…

But, there’s coming a world war of spectacular proportion. Whether nukes are ever allowed to be used, we’ll have to see. It will be church and state. Europe is going to have to respond. I will show you so much more. I know much more of the detail than I have time to tell you.

Dave claims that HWA is going to lead the armies of Dave's god as he destroys the kingdoms of the earth.  HWA should like this since he always thought he was something special and powerful.

There’s much more to cover. In weeks to come, I will show you more about how Mr. Armstrong was, in fact, right on several things we thought might be wrong, merely because the timing was wrong. Zerubbabel…You know…That he was Zerubbabel is just one example of things we have seen that were right. But if you don’t know about a resurrection of the dead…I mean, brethren, how am I going to know he was Zerubbabel? But, finally, God breaks the code like with so many other things.

We are in a very evil time—and I mean, a terrible time—and I don’t think we have long. That’s a different discussion. But, maybe you’ll enjoy thinking about that “three years” business. I will have a lot more to say in three weeks.

What a game of gossip! HWA wouldn't even recognize what Pack has done to his prophecy mold.

"And then he’s going to bring forth the Headstone, as the Chief Administrator. I believe Elijah’s task…As I’ve explained…he does a different thing before and after. He works with the nations of Israel. I understand that. But he will then introduce—to the entire world—Jesus Christ."

This is unbelievable, the arrogance of Pack. What? Dave must introduce Christ to the world! Apparently, Dave and Herbert will be so great, that the world won't even be able to recognize Christ above them. He will need to be pointed out. Maybe it's like when He disappeared in the crowd, no one will recognize him.

David Pack... turning more people to atheism than ever before!

What about the unconverted men who asked amongst themselves and each other, "That place over there seems to be the only place getting better on this forsaken planet. Let's go up to the mount(possible) of God and he will teach us His ways!"