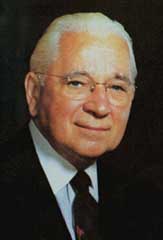 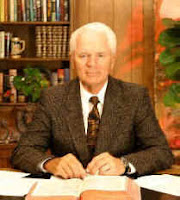 There is a phenomenon in evangelism that is quite strange to me. I call it Necro-Evangelism and it is where local or even national radio evangelical and fundamentalist churches continue to play the sermons of long dead founders to convert the masses. There are at least three major churches in my area and one I know of nationally that practices Necro-Evangelism and I'd like to explore the pitfalls of this if I might.

I find it funny in a macabre way to hear, usually the surviving son of the now dead evangelist, inviting the audience to stay tuned for a message from my now long dead father and pastor so and so. Some of these evangelistic types have been dead for just a few years, and so we might attribute his ongoing ministry as shock that the man died on the part of the family who has no clue on how to keep the business going. Others have been dead for decades and I suspect that as long as the tapes play and can be recopied, they will continue to preach right up until the Second Coming and maybe beyond! Usually there is a college or "work" that the family of the now deceased evangelist has inheirited to be maintained and, while the current family members might be up to the task, it's just good to hear the founder as if he was alive and well on the air. Others, to me, seem like the type that would never themselves be able to do what dad did with evangelism, but can't give up on the programming dad put in their heads nor the bucks it still can generate. That is an observation about method, not sincerity.

People hate change and this delays reality for many who have grown up on the words of the evangelist, now dead. One local college where I live continues to play the sermons of the long dead founder even though two or three generations have taken over the family business of evangelizing since his death. I don't believe I have heard a sermon on the air by any of the sons, all identically named after the founder save for the II,III or IV behind the name. Some Christian evangelists might be happy to return to glory, but you'd never know it as family desperately tries to keep things the same same as always the same as before he became a Necro-Evangelist. Why do we do this and what is the message it sends? You don't see Necro-Evangelists on TV, just radio. TV would be a bit much to take and obviously in poor taste.

First of all, it matters not if it is a right or wrong thing to do. I am sure the argument is "well if we had Jesus or Paul on tape, would we not play it?" Well yes it would, even though that isn't going to happen. We have them in books and we're not sure there if they really said and wrote what some say they did. All we need is a bunch of fake Jesus tapes floating around and here we go again! A whole industry would break out verifying or repudiating "the Jesus tapes." So while I understand the point, these men are not Jesus or Paul, and besides if you really know theology, you might suspect that the real Jesus would not have really appreciated the real Paul anyway, so now we have tape conflict. Then we'd have to deal with James tapes and what a mess! There would be a whole market in underground tapes and pseudotaperapha and we'd not be much further ahead than we are today with our understanding.

So while Necro-Evangelism might keep the family church, college or business going a few more generations, is it the thing to do really and what message does it send? One advantage is that, indeed, it does buy the unskilled or founder beaten children time to regroup and figure out what to do now that dad is gone. All their life they had preached that the Second Coming was going to for sure be in their lifetime but now what? Usually the first generation founds something, the second maintains it, and the third loses it all. Necro-Evangelism can postpone the Necro-evangelist sinking into a "who?" a generation later than this perhaps. But back to the message it sends that might be not good.

1. Necro-evangelism tells the audience that the sons do not have the conviction or skills that dad may have had but aren't willing to give it up as something dad did but we don't wish to do. So we play dad's sermons and don't have to come up with our own, "alive" ones. In my town, one such family member certainly does not have the voice quality or sound of conviction of his dad for sure, so I can see why he might wish to have dad keep it all going. He confines himself to introducing "my deceased dad, Dr...." and selling his tapes and even the library books his dad cherished, which obiously he doesn't. But he also has another line of work from what I understand, so does not depend on his Necro-Evangelist dad for his sole income.

2. Necro-Evangelism sends the message the survivors are spiritually lazy, but again, just can't give up on the potential to have a following or keep it all going. The second generation makes forays into the world of evangelism, usually getting caught up in politics more than dad did because down deep they know most of what dad either predicted or said did not really happen that way, and they just aren't convicted the same way dad was. Dad kept them out of "the world", and darn it, they are going to see it before they become Necro-Second-Generation-Evangelists too. Since dad impacted their lives with his own worldview, and often not in a very good way, they just don't have the same need to pass it along with dad the Necro-Evangelist's same fervor. In fact, they can't. So they busy themselves with producing dad's tapes and books and don't have to do much that shows their own creativity. They can run for public office or lecture as they wish, but keeping a ball rolling is much easier than getting it started. Anyone can be made the next president of a Necro-Evangelical College or Pastor of a Necro-Evangelistic Church. Starting the sucker is the hard part. Keeping it going can be a challenge but if we keep dearly departed dad in the picture, it is easier for sure. Somewho we filter out the fact that the Necro-Evangelist is long dead and maybe evangelism is a profession for the convicted living.

3. Necro-Evangelism sends the message that the Necro-Evangelist knew all there was to know about the Bible and all related topics. There is nothing new to learn or even unlearn, since dad made no theological mistakes, which is not true. Since we all like to hear the "old, old story, let dad explain it over and over. This is one thing that is wrong with religion in general. It supposes that all it's spokesmen had it right to begin with. If they could read the bible, tell a few good stories, keep you interested and convince you that the reading was the same yesterday, today and forever, bingo!...why change a winning game? Problem is that for every tape played, there are many that can't be for they are either dated by comments made during the sermon or even the family realizes that how or what dad said that day is not true or not appropriate today and let's just not play that one. So you're really not getting the whole man, you are getting the "Best All Time Hits of the Necro-Evangelist," as selected by the next generation. That's kinda no fair to me!

4. Most of those that had been inspired by the now Necro-Evangelist are now themselves Necro-Christians so they aren't even around to hear dad anymore either. They were all about the same age and have long since moved on to other heavenly realms. The kids of those who loved the now Necro-Evangelist aren't going to be inspired by a dead man. Sorry, they just aren't. They will feel the above three points even if they don't voice it. Kids aren't stupid and will see what generations II and III might be up to and how lame it is. These kids tend to find churches by saying "as for me and my house, we shall serve a living evangelist" and not just the memory of the good ol' days when the parents thought the now Necro-Evangelist could do or say no wrong. I used to pastor a church that on way too many occasions sent out taped sermons from the then living Apostle and occasional Evangelist. It was hard enough when they were alive, don't make me listen when they are dead!

Well I think we get the point. Is it right or wrong to conduct a Necro-Evangelically-Centric ministry? I don't know. It's just lame and nothing but a evangelical dead end.

A valid message does not become invalid because the person delivering it dies. If it did, which parts of the bible would be left to us today?

Having said that, you have a point. In many organizations, those who succeed the founder do not have the same level of charisma or understanding so they depend on recordings to keep the organization relevant.

The Bible is full of comments from those who have been dead from 2000 to 6000 years. These are churned out in churches around the world today.

The same applies to most religions where the words of long dead prophets are used as if they were spoken yesterday. We can't refer to them all as "Necro-Evangelism".

That said, there is a lot quoted today by many religions that was applicable when it was written thousands of years ago for their society but is not applicable today, yet it is still quoted as if it is relevant for our society today.