Did you know that Saul was on a holy terror and persecuted people who would not keep Christmas, Easter and Halloween? Halloween?????

This stupidity comes from Yisrayl Hawkins, the convicted felon who runs The House of Yahweh in Abilene Texas.  Hawkins mind was warped by Herbert Armstrong's teachings and then went off the deep end forming a cult in Texas. 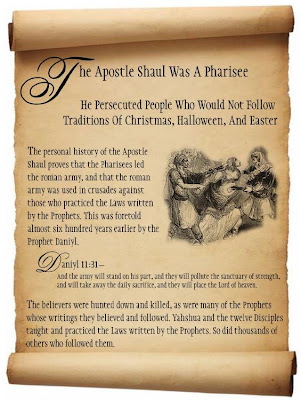 Some of his recent stupidity includes:


Constantine changed the Feasts of Yahweh and instituted holidays, such as Christmas, Halloween and Easter, as official rest days to be celebrated, which also carried the death penalty for not observing them.

Those living in Galilee, where Yahshua and the twelve Disciples were born and raised, were persecuted the most because they were all taught by Yahshua, and then the twelve Disciples after Yahshua's death.
The Galileans fled to the land that later became known as America. They are now referred to as the American Indians.

I was working at the front desk at St. Francis hospital in Greenville.
It was about this time of year and a nun came up to me fusing about how pagan and wrong Halloween is. She then went on to tell me it was meant to honor God and Jesus and the true meaning has been lost.

"Even the Lord's prayer says, 'HALLOWED be THY name..Hello!...Hallowed...Halloween!"

I just stared at her and reminded myself the Catholic Church also has its loons, theologically questionable reasonings and funny nuns.

But Dennis, the name is now Jesusween!

What idiot came up with the idea of Jesusween?

What's next- Snow White and the 7 dwarfs suddenly becoming Mother Mary and the 7 disciples?

I think you guys are missing one other thing in No2's post. What about those Galileans who immigrated to America to become the American Indians while losing all their culture. Armstrongites are such idiots!

Yisrayl Hawkins is NOT a convicted felon. Are you as sure of his felony conviction as you are about the rebuttal you have made to his most educational article on the Apostle Shaul?