Dave Pack: Ministers Who Will Soon Be Joining Me Will Come Out Of The Ground 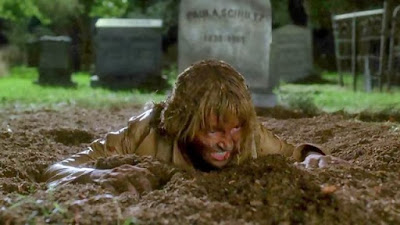 Dave says that many ministers who will be joining his cult will be coming to him out of the ground.

Many of the ministers that are coming to do the Work and enter the Kingdom are coming out of the ground, brethren. I am telling you, a lot of them wrote their record—they have built their character—they’ve served other people—they were faithful, in some cases, for decades before Mr. Armstrong died, and then they went wherever they went. But they are taken away because they’re settled, and they’ll come up at Christ’s Coming.

Others are dying, and they just died. They might have been tares. They might have fallen away completely, in the past. That’s why we don’t want to judge. Don’t decide that they were evil—and don’t decide that they were righteous. Just be aware of the process that, in many cases, God takes righteous men away from an evil I’m going to explain next week—that all of you know nothing of. The time has come to explain it. It just got particularly personal this week with a group of people I knew and helped come into the Global Church of God, and I wanted to explain that.

We can see where this fantasy is rooted! No living ministers would even consider aligning themselves with him. The closest he came to this was Dale Schurter, and all too quickly we ended up learning that Dale suddenly lapsed into age-related dementia, leading him to disagree with Mr. Pack and to need to take an early retirement.

So, these dead guys won't be grateful to Dave for long. After answering Dave's exhaustive questionnaire, they'll probably wish that everything can be set right by their being dead again!

Well thank you Dave. He just called his congregation stupid in need of his understanding to catch up. Special knowing is so condescending

Just so you all know (not that anyone cares), I hate zombies.

(Art Gilmore Voice)... COMING SOON TO A THEATER NEAR YOU!...

"THE NIGHT OF THE LIVING DEAD"

...In Surround Sound and TECHNICOLOR!

Well, the Return of the Living Dead's fixation with brains really fits well in this situation, doesn't it?

Unfortunately, too many living ministers have aligned themselves with Dave Pack.

Perhaps one of them will take over when Dave dies.

Pack gets more ludicrous every time he opens his mouth. I am amazed people sit there and think this is normal.

When people follow the example of a "powerful" manipulative person who is always selling, always persuading, and seemingly always winning, that ingrains a lifelong habit pattern that is very difficult to uproot or shake. Most of us are in recovery here, but look at all the salesmanship that goes not so much into discussing different ideas, but in selling specific agendas, or suggestions for modifying post-cult behavioral patterns that people have carefully considered and chosen for themselves. Of course, all factual information and any ethical techniques are fair in attempting to educate people out of Armstrongism, but it's what goes beyond that that reminds one of the one size fits all approach HWA taught. As an ancient African American philosopher once observed, "different strokes for different folks"

I think that pic is Uma Thurman in Kill Bill 2. She knew how to deal with people like Dave.

Hopefully, if Pack, Flurry, or these other tyrants get old and senile, their kids will follow church protocol and leave them at the mall. Someone will find them and take care of them.