Habakkuk Is Now In Our Midst! Heed His Warnings! Why is it that so many of the delusional self-appointed false prophets of Armstrongism have to continually compare themselves to Hebrew scriptures prophets?  Never once do these fools claim they are following in the footsteps of Paul or James or horror of horrors...Jesus!

Now one of our most delusional self-appointed false prophets has taken upon himself the mantle of Habakkuk.

Almost Arrested, Elisha, Elijah, Amos, Joshua, End time Witless Witness, and our most favorite Doubly Blessed Prophet is now comparing himself to Habakkuk   Just like in the time of Habakkuk, when those people did not heed his message, the same is going on today in these most violent horrible end times as people will not heed the revelations and teachings of Bob Thiel.  Woe to you sinners who do not believe! Lukewarm Laodiceans!  Where is the zeal?  Where is your dedication?  Bob's the man!   THE man!  Heed him and be saved!

1 The burden which the prophet Habakkuk saw.
The Prophet’s Question
2 O Lord, how long shall I cry, And You will not hear? Even cry out to You, “Violence!”And You will not save. 3 Why do You show me iniquity, And cause me to see trouble? For plundering and violence are before me;There is strife, and contention arises. 4 Therefore the law is powerless, And justice never goes forth. For the wicked surround the righteous; Therefore perverse judgment proceeds.
The Lord’s Reply
5 “Look among the nations and watch — Be utterly astounded! For I will work a work in your days Which you would not believe, though it were told you. 6 For indeed I am raising up the Chaldeans, A bitter and hasty nation Which marches through the breadth of the earth, To possess dwelling places that are not theirs. 7 They are terrible and dreadful; Their judgment and their dignity proceed from themselves. 8 Their horses also are swifter than leopards,And more fierce than evening wolves. Their chargers charge ahead; Their cavalry comes from afar; They fly as the eagle that hastens to eat. 9 “They all come for violence; Their faces are set like the east wind. They gather captives like sand. 10 They scoff at kings, And princes are scorned by them. They deride every stronghold, For they heap up earthen mounds and seize it. 11 Then his mind changes, and he transgresses; He commits offense, Ascribing this power to his god.” ( Habakkuk 1:1-11)

Notice that the above states that the end time work will not believed by many even though God will reveal it through–which He does through His prophets, like Habakkuk.

Four guesses as to WHO is doing that end time work...Rod Meredith?   Dave Pack?  Gerald Flurry? 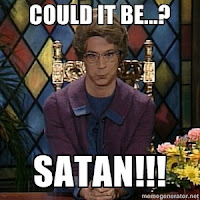 Here is something that was written in 1973 for the old Ambassador College by Dean Blackwell:

Why do you think in Habakkuk, God said that He’d “revive His work in the midst of the years”? Would this be said if they were doing the work in all the time of the New Testament Church?

He is referring to God reviving His work in the midst of man’s last century. He said that God would make known what is happening and what’s going to happen in man’slast years, in the day of His wrath. He requested that God remember mercy and hide His people in a place of safety.

The work needs to be done in the 21st century. Will you truly support it?

Whether or not Habakkuk himself died on January 15th, the reality is that since much of his message is for the appointed time of the end, his writing (that God inspired) is applicable today.

This is unfathomable. I don't understand how anyone could rise to a level of such presumptuousness, claiming that they are like or equal to one of the holy men of the Bible. That lack of fear or proper respect is enough alone to tip one off to the bogussness of such a "messenger". But, they do it in the ACOGs all the time, and we're somehow not supposed to think that's strange???

Gerald Flurry has commanded a mandatory Fast starting at sunset last night. He's in a mad panic because membership is down terribly and they're in bad shape financially. Edstone is a money pit and costing them a fortune, bringing in zero revenue. They can't even afford a backup generator when the power frequently goes out.
The Irish dancing expenses is out of control! The fees to attend the different Feis around the country, the costumes and expensive wigs. There's even rumors of possibly selling the Auditorium.
The recent Ruth play didn't bring in the funds they thought it would, seems these clowns have no idea what they're doing.

This will disappoint Pack, who didn't come up with himself being "Habakkuk" first. He will have to come up with a year long Sabbath sermon series as to why he is, and Bob is not, Habakkuk.

It is truly unfortunate that during the time of Habakkuk there were no mental health professionals.

But there's no excuse these days....

"For I will work a work IN YOUR DAYS Which you would not believe, though it were told you. 6 For indeed I am raising up the Chaldeans, A bitter and hasty nation Which marches through the breadth of the earth, To possess dwelling places that are not theirs"

Habakkuk? That's nothing! As all the pagan Mayans will someday come to realize, Bob is also the end-time Chacmool.

Who didn't see this financial tsunami hitting PCG? All of their bungles have been reported here for quite some time now! I'm thinking the Flurrys figured that God would provide the moneys to cover their stupidity, but the problem is that every time there is an opportunity for God to endorse them, He doesn't. You could make a case that God blesses Oprah Winfrey for her work and example more than He has ever blessed any of the ACOG splinters.

Thanks for the Flurry report. Please keep us posted, as Flurry is extremely secretive of numbers and finances any true inside reporting.

Next thing you know, all of the ACOGs will be plagiarizing this idea from one another. There will probably be a slew of 'kuk books published over the coming months!


Anonymous on January 15, 2017 at 3:33 AM said...“Gerald Flurry has commanded a mandatory Fast starting at sunset last night. He's in a mad panic because membership is down terribly and they're in bad shape financially.”


The PCG is also in bad shape spiritually, morally, mentally, etc., but it only cares about its financial shape.

If the fast is long enough, some more old PCG geezers might die from it and leave their estates to the PCG. This might work well for Gerald, but not so well for the old PCG members who croak. The length of the fast could be determined by how many old geezers the PCG needs to snuff out so it can access their estates.

A mandatory fast for all PCG members might actually be an excellent idea. Too many filthy old men and horny old hags in the PCG have nothing but sex on their minds continually. Week after week, month after month, and year after year, all they do is prowl around and prey on the younger members. That is all they are there for. Too many of the local PCG leaders are just in it for that reason too. It is insane. If PCG members are required to fast long enough, they might eventually, finally, start to think about something other than trying to satisfy their deranged sexual appetites.

Anon 816 wrote: old PCG geezers might die from it and leave their estates

That will take care of one problem, and that is, if your members leave their estates to your COG, you still have to wait for them to die.

As Dave Pack noted years ago, in addition to waiting for natural attrition, there is also the problem of lengthy probate, contesting of the will, leaving the church before dying, and so on... So the obvious solution was, give now, die later...

And I always forget about HWA's dying on Jan 16, and I rely on Bob to remind everyone. And each time, I pick on him for using the same photo of HWA, which highlights his pagan medallion. Of course, Bob uses HWA's demise to promote himself as the most worthy successor to the Philadelphia mantle.

Whoever put together the first illustration for this post failed to follow an important principle of effective word choice: call a spade a spade.

Prof, you are the Ace of Tools!