January 1, the Non-New Year of Which COG False Minister/Prophet? 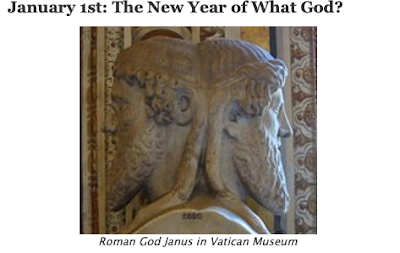 Our favorite doubly blessed false prophet is back once again condemning the word January and the fact that the year begins on January 1 instead of some other month he deems more significant.  Reading the rantings of the "Chief Overseer" of the improperly named "continuing" Church of God, one would be the impression that anyone who uses the word January is fornicating with pagans and bowing down at the altar to Janus.


Does God begin His new year on January 1st? If not, what is the origin of January 1st and New Year’s?

Back in 46 B.C., Julius Caesar declared that January 1st would mark the beginning of the new year. January was named after Janus, the god of gates and doors in Roman mythology. People prayed to Janus when they wanted something new in their lives (such as resolutions). Janus is normally represented with two faces, one looking to the past and the other looking to the future (the two faces also signified change that Janus would supposedly bring in, see Burchett B, Janus in Roman life and cult: a study in Roman religions, p. 15). The first day of the month of January was sacred to him.

It did not come from the Bible.

So what!  Most of the things we do as humans did not originate in some esoteric Bible story. Even Israel's early harvest festivals were all built upon the harvest festivals of the pagans around them.  If the God of the Scripture wants to use something to a higher purpose, then it did not matter where the tradition originated.  Plus, when have we ever seen any COG leader with a statue of entwined serpents hanging in their offices or on the front lawns of their HQ's or auditoriums?  Their God used these things for a bigger purpose, but they do not.

The false prophet then gets all orgasmic in quoting things about Minerva and Saturnalia, as if ANYONE in the ENTIRE world even thinks about these two topics.


The Minervalia are as much Minerva’s, as the Saturnalia Saturn’s; Saturn’s, which must necessarily be celebrated even by little slaves at the time of the Saturnalia. New-year’s gifts likewise must be caught at, and the Septimontium kept; and all the presents of Midwinter and the feast of Dear Kinsmanship must be exacted; the schools must be wreathed with flowers; the flamens’ wives and the aediles sacrifice; the school is honoured on the appointed holy-days. The same thing takes place on an idol’s birthday; every pomp of the devil is frequented. Who will think that these things are befitting to a Christian master, unless it be he who shall think them suitable likewise to one who is not a master? (Tertullian. On Idolatry, Chapter X. Translated by S. Thelwall. Excerpted from Ante-Nicene Fathers, Volume 3. Edited by Alexander Roberts and James Donaldson. American Edition, 1885. Online Edition Copyright © 2004 by K. Knight).

Those damn people who had to go and create Saturnalia and then, even worse,  name the 7th day after Saturn!  Using apostate Bob's logic, then every time he gathers his few white Caucasians into church services on Saturday, he then is worshipping Saturn.  No wonder Thiel is so dreamy all the time.  Those dreams he has are coming from his god, Saturn!

The official COG Dream weaver then goes on to make this extraordinary illogical leap in understanding:

19 What am I saying then? That an idol is anything, or what is offered to idols is anything? 20 Rather, that the things which the Gentiles sacrifice they sacrifice to demons and not to God, and I do not want you to have fellowship with demons. (1 Corinthians 10:19-20)

It has always amazed me as to how the Church of God has given so much power to the god they claim to be opposed to, yet Jesus is left by the wayside, an impotent and largely ignored personality, as Satan and demons are consistently made out to be the the all-powerful ones.

January 1st is not the beginning of the year for the true God, but only of certain false gods.
Now perhaps it should be mentioned that other cultures also accept that the new year begins in the Spring. And while those cultures have various non-biblical practices, it is certainly possible that because God’s year begins in the Spring that perhaps anciently these people were aware of it, and retained the correct season, but not the practices.
Not all have followed the practices of Julius Caesar (called “Julie” below):

For some thousands of years before Julie and the Roman Senate got involved, the new year was celebrated with the first edible crops of the season or the first new moon.
In much of India, Nava Varsha is celebrated in March or April, just as in the most ancient civilizations.
Sikhs celebrate Hola Mohalla in March; ditto for Persian Nowruz.
As celebrated in China and southeast Asia, Lunar New Year still has a floating date, the first day of the first lunar month. (Shore R. Pagan Party: New Year’s traditions that hail from the depths of antiquity The Vancouver Sun, Canada – Dec 26, 2008, http://www.vancouversun.com/Pagan+Party+Year+traditions+that+hail+from+depths+antiquity/1116320/story.html viewed 01/22/09)

From a biblical perspective, the new year begins in the Spring, and hence not January 1st. And it also begins with a new moon. The fact that even many non-Christian cultures realize that should make it easier for Christians to realize that they too, do not need to heed the later practices of the Romans.

Yep, come springtime this year, the false prophet will be back again accusing people of worshipping Isthar and bowing at the throne of Satan as they sacrifice their children to Baal while eating chocolate bunnies and coloring eggs.

This is deliciously ironic, considering how Bob's explanations of Mayan prophecy depended on acknowledging the passing of new years on the Mayan calendar, rather than on the Hebraic calendar.

Is the word Bob in the bible? Must be pagan. And, for all we know, it could have a perverted sexual meaning, like someone bobbing up and down on something that I won't mention. Perhaps Bob needs a name change.

Of all the COG leaders out there, Thiel is the one who dabbles in the dark side of demonism and paganism the most. His mind is incapable of finding beauty in the world around us. It is all evil 24/7. Has he not ever experienced joy and wonder?

Wasn't Thiel the one who said the Mayan Calendar only went up to 2012, and that was a signal for "the end of the world"?

Thiel , like they did on the "Gong Show" many years ago, you have failed, the Gong has rung, and you need to get off the stage!

These guys strain their eyes and necks looking for the first sliver of the new moon ! Yet they fail to see that each year, the first days to become longer are the harbinger of the end of winter, and the beginning of the warming up of the hemisphere and an entirely new cycle. When they look to Spring as being the beginning of the new year, it's as silly as regarding the second quarter of the moon as signifying a new month.

the most basic of logic would suggest that the renewals of spring indicate a new beginning; only someone what has been eurocentricly brainwashed would think that a period in the dead of winter should be the new year instead of the newness and regeneration of spring time...

The new year begins right after Labor Day, with the first classes of the fall semester. That is also the time when the dove and early goose seasons open--multiple signs that this is the time to get going with the most important activities of the year.

"...then every time he gathers his few white Caucasians into church services on Saturday, he then is worshipping Saturn."


if that isn't convoluted logic I don't know what is...

a bunch of pagans calling the Sabbath by a false god's name does not make Sabbath keepers worshipers of said false god.
I'm thinking that this blog serves only to discredit God and His instructions.

or maybe the folks here can't distinguish between false teachers and the truth.

guess that's why it's called confusion.