Miraculous healings in the WCG?

After talking to Dennis, I decided to see if I could find more information about Howard Clark’s healing, since Rod Meredith used to talk about it regularly as one of the great healing miracles.

From the article below, it looks like Howard Clark was paralyzed. When the “healing” took place, his paralysis was lifted, but then he could feel the tremendous pain of his injury.
While recovering from complete paralysis does happen (there is a book written by a former NFL player who recovered from complete paralysis), one would expect a miraculous healing to be complete – having severe pain does not seem to me to be compatible with divine healing.
It does not appear anyone in WCG or splinters has been given this gift.
If you know otherwise, let us know, and we will make our way to the divine healer with all our incurable ailments.

Acts 3King James Version (KJV)
3 Now Peter and John went up together into the temple at the hour of prayer, being the ninth hour.
2 And a certain man lame from his mother's womb was carried, whom they laid dailyat the gate of the temple which is called Beautiful, to ask alms of them that entered into the temple;
3 Who seeing Peter and John about to go into the temple asked an alms.
4 And Peter, fastening his eyes upon him with John, said, Look on us.
5 And he gave heed unto them, expecting to receive something of them.
6 Then Peter said, Silver and gold have I none; but such as I have give I thee: In the name of Jesus Christ of Nazareth rise up and walk.
7 And he took him by the right hand, and lifted him up: and immediately his feet and ankle bones received strength.

If he was laid daily at the gate of the temple, why didn’t Jesus heal him in one of His many visits to the temple?
Like Dennis stated in a post a while back, I want to believe – but this does not make sense to me. 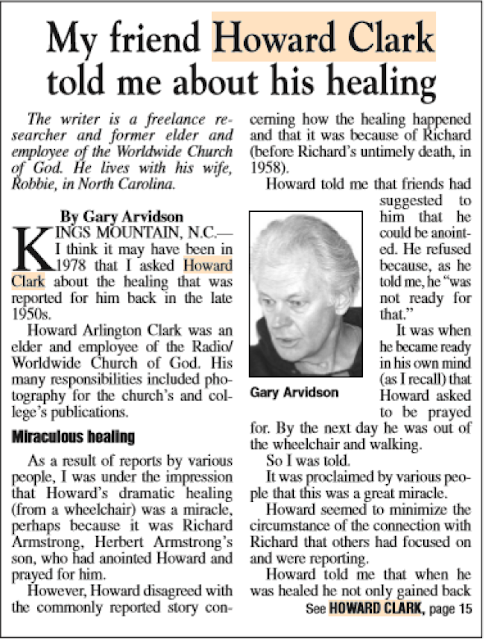 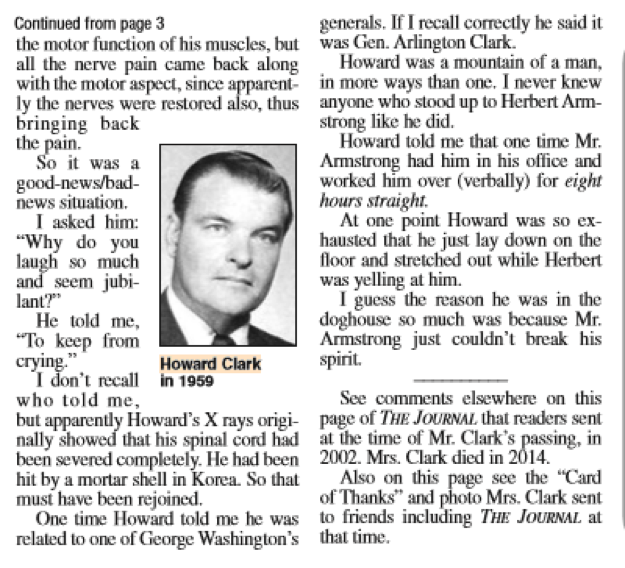 This smells of Benny Hinns circus like healings on his TV programs. If those are authentic, we can close down our hospitals and medical colleges.

Ron Dart spoke of this event, and how electrifying it was to everyone at church at the time who saw him. As I recall, it was around Passover time, and his first public appearance after the healing was at that event.

Clark did not endure the WCG experience, and ended up dying as an atheist , and quite a bitter and angry man. A very curious story indeed.

This is an interesting and entertaining movie about a fake faith healer - with a good twist at the end.

I remember the day in the mid ‘70s, at AC Press, when one of the student workers came in and said, “Hey Bob, did you have Howard Clark for First Year Speech?” I nodded, and the student said, “Well, he’s out!” I looked at him quizzically, and asked what had happened. The student replied that they had finally gotten tired of his big mouth.

Mr. Clark was an amazing person with a very unique sense of humor, and well liked by all. Perhaps because of his injury and pain, he was known as being one of the merciful standouts amongst the faculty and administration.

At the time he passed away, I was in contact with one of my old AC dorm mates, who had remained in contact with Howard right up to the time of his death. If there was any anger or bitterness, my friend knew nothing of it whatever. From the accounts, it sounded as if he was the same Howard we had all known, humor intact. One thing, though. If he had ever thought there had been any sort of miracle associated with his recovery, It did not convince him that he should remain in Armstrongism.

By the way, this was a marked departure from the regular healings of colds that required about two weeks, or athletes foot that miraculously went away in the presence of powder. And, it made some people ask some serious questions when Loma Armstrong did not receive the same sort of “miracle”. If there were miracles in the R/WCG, they were not something which could be regularly depended upon.

Healing is so old school. They are raising people back from death in South Africa: https://www.bbc.com/news/world-africa-47408289

I remember Howard Clark very well. He was a great guy. Human, of course. A lot was made of his purported healing. I think it was partial nerve regeneration which sometimes does occur. I never discussed his "healing" with him. He tried to be an honest and honorable man in everything he did. He even signed over a car he didn't need when I didn't have one and asked for not one dollar in exchange. I know from experience that he didn't just talk the talk, he walked the walk to the best of his ability.

I was acquainted with Howard Clark, but left Ambassador before I had a chance to get to know him very well. Well enough, though, to know he was a man of impressive intellect and character.

Seems like he really deserved this healing based on the comments here. Wonder if that means anything.

It seems possible and even likely his healing was a coincidence and not faith. But who knows.

I bet a comment from an atheist will pop up soon to try and derail this into anti bible territory.