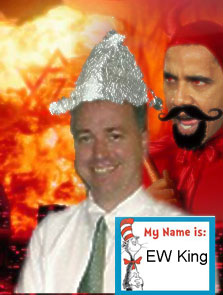 One of Armstrongism's wackiest splinter cult leaders is talking about "Sissy La La's" tonight. What's a Sissy La La?  Republicans who have whored themselves out to the Democratic left.

Sadly, those in the Republican Party have tried to deny their true connection with Christian morals and values. Because they now seek popularity, money and power they are abandoning their true Christian moral stand. The Forefathers of America [Manasseh] didn’t care about what other fallen pagan nations thought. They were willing to die for true morality! Even if they were a Remnant!
What you can expect to hear from your fallen Republican party is a denial of their Christian morality. Their whole argument for existence will be about economic stability, world control and money control minus Christian morality. They will claim that they have no problem with Homosexual-marriage, Divorce, Abortion or legalizing bad Drugs. They simply want money and power.

Now even the fallen apostate world of Christendom no longer believes in moral absolutes. Thus, America will fall just as God’s word proclaimed that it would. This is sad but at the same time, for true Christians [members of the “Worldwide Church of God” & COGSR] it means that God’s coming Kingdom is right around the corner!
Watch now how the fallen Republican Party fights for Abortion, illegal Hispanics, Gays and Drugs. They are more concerned about numbers than Truth. Christians will die for Truth…not numbers or fallen pagan acceptance!

EW is such an intellect! I mean, his writings seem to be geared to MENSA members and Rhodes scholars!

Who are the forefathers? The pilgrims? Or the guys who signed the Declaration of Independence?

If if was the pilgrims, they weren't Republican politicians. They were puritans (latter day pharisees). If it was the signers, what they were willing to die for wasn't a christian moral stand, but the right to self-determination.

We wold be lucky if any politician at any time in history has ever been willing to die for morality, "true," "christian," Republican, or otherwise. They've always wanted power and money for themselves (and in that order).

And knock it off with the hokey BI. America, like no other country on earth is such a mixture of people from every corner of the planet, so it isn't the descendants of "Manasseh" or any other single ancestor. If science got away with as much malarkey as organized religion, we'd still be bleeding people when they got sick to let the bad blood out.

America will fall, but it's because of fiscal irresponsibility, not any other moral failing.

Technically speaking, the United States of America is Ephraim.

Like the false apostle HWA would say: "If your premise is wrong, everything based on it is going to be wrong. That’s why this [sissy la-la] world is wrong!"

Technically speaking, the United States of America is Ephraim

And we know this because Greg Doudna came up with the idea as a thought exercise at Big Sandy while he was a student there.

It was wrong of course, but imbecilles like Bill Dankenbring plagiarized entire sections of "Showdown at Big Sandy" from Dr. Doudna with nary a reference or credit given (seeing how that it completely reversed the material to make it say something it didn't may have provided some incentive in redacting the source).

No, indeed, DNA proves that those of the white Europeans settled in the United States are not descended from Abraham, unless, of course, you count the Jews -- but that's pretty useless, since we were attempting to prove that the United States is not a Gentile nation and is a lost tribe of Isreal and the Jews are not lost... at least not yet. If the Armstrongists have their way, the Jews will disappear from the scene and only the United States and Britain will be left as the only true legitimate heirs of Jacob. Or so it would seem.

Anyway, none of this is really Christian, so scratch E. W. King from your column of religious leaders and place him firmly in the column with the cult leaders (of the which, he's not really much of a leader).

It's a good thing I have the latest issue of Analog: The science fiction is better and concerning their facts -- no one in Armstrongism has any, so Analog beats them all hands down.

Sabbath keeping Scientologists are what the Armstrongists are, without one shred of credibility.