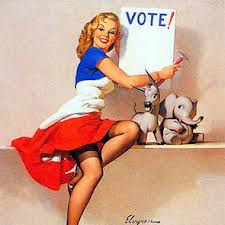 Just did my civic duty. I was listening to talk radio, and they were mentioning that the more stable, responsible members of society generally are the high turnout groups. I won't mention who were identified as being the more stable responsible citizens, because, believe it or not, it would cause controversy.

Hold onto your Nutter Butters, folks. It's about to get fun!

I'll guess that "the more stable, responsible members of society [who] generally are the high turnout groups" are those who voted for President Obama, since he won the election.

THANK YOU HOLY SPIRIT AND YHVH AND JESUS H. CHRIST FOR GIVING US THIS MIGHTY SIGN!

I know a couple of people in UCG who have told me they DID vote in the 2008 election - primarily to vote against Barack Obama.

One of them admitted to me he was doing it again this year as well.