The Laodicean Church of God 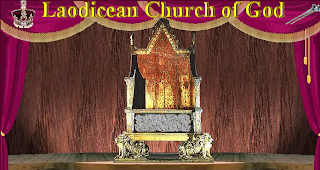 Here's a splinter group that I missed out on joining.  It is called the Laodicean Church of God.  It was started in 2001 by Jim and Peta McGinn

In 1999 they discovered "new" knowledge and attempted to educated the folks at United Church of God about it.  UCG did not listen, so in another tempter tantrum they set out to start their own group.  That is how easy it is in Armstrongism to start a splinter cult.  Gain some "knowledge," present it to your church leaders, get slapped for being so arrogant and then leave and start your own group.  That is a time tested way that the 600 some splinter cults of Armstrongism formed since Big Daddy did it to the COG7 in the 1940's.

It always seems to be about new understanding or knowledge that they discover.  God deliberately kept that knowledge hidden till they discovered it.  What a weak god they follow if that is how they think it operates.

They seem to be part of the "one god" crowd and say Jesus Christ is a created creature, but most important of all you must agree and acknowledge that Hebert Armstrong was a faithful servant of God.  Since when has ones salvation been dependent on acknowledging HWA?

To be a member of God’s flock you would have to agree that Mr. Armstrong was a faithful servant of God.

The new knowledge of the Father is that He is the one true God and that He alone has existed for eternity.  There is ONE TRUE GOD.

The new knowledge of Christ is that He is the born Son of God before creation.
Christ has not existed forever He was born of the Father before anything else was created.

If the above new truths can be accepted then you are one of God’s flock.


Did you know that Jesus and Lucifer are brothers and that Lucifer is actually Jesus' son?


Jesus Christ is a Morning star.


Rev 22:16  "I, Jesus, have sent My angel to testify to you these things in the churches. I am the Root and the Offspring of David, the Bright and Morning Star."

About Jim and Peta McGinn

We began attending Worldwide Church of God in 1978.  In 1979 we were baptised and continued in Worldwide until 1995 when we joined United Church of God.

We had always been interested in bible study and bible discussions amongst the members.


In 1999 my wife and I had been shown, by a member, plain scriptures that proved Jesus Christ was the born Son of God from the beginning, {prior to creation}.  Our friend had also showed us that God the Father and God the Word were on Mt. Horeb when the Father gave the Ten Commandments.


The implications of this knowledge were not immediately apparent.  After an in depth study into the Passover and the nature of God, I realised I was learning new knowledge, which had been hidden since the time of the Apostles.  As John 17 v 3 became clear, I realised God was revealing the knowledge of the truth, which is the true gospel of the Kingdom, the words of eternal life.  My wife joined in the study and we have believed, loved and obeyed this new truth as we have learned it.


This plain knowledge has been resisted fiercely by forums, and churches and individuals.


Toward the end of the year 2000, we had good understanding of what we now know was the knowledge of the truth.  The exodus from the Passover to the entering of the Promised Land was a direct type of our calling from carnality to eternal life.


The Philadelphian era, with Mr. Armstrong as the physical leader was not given this knowledge.  They had to hold fast to what they had, and were to be kept from the end time events.


We sent this new knowledge to the council of elders of the United Church of God, and the ministers in Australia, on the 1st January, 2001.  It was our desire that the United church would believe the bible and adjust their doctrines accordingly, and teach this plain new knowledge to the membership.  They rejected it out of hand, and after we had a discussion with our minister, and elders, we were asked not to attend church in April 2001.


The Laodicean era of God's church began on the 1st January, 2001, when my wife and I acted positively to the new knowledge and with a correct heart and attitude we forwarded the precious treasures of new knowledge to the elders of the United Church of God.


We had the understanding of the revealed knowledge that Jesus Christ is the Son of God from the beginning {before creation}.  This era has started as a mustard seed and will eventually fill the whole earth.  Jesus Christ, at the time of writing, is building His church with the end time knowledge.  Jesus Christ will decide when to add membership to His church.


My beloved husband Jim died on 27th March, 2011, this being 12 years after we first began to understand the knowledge of eternal life.  I will continue on with the work that the Holy One of Israel puts before me.  Our son Jesse McGinn is now studying with me and together we will continue this great work of God and His Son Jesus Christ.


So many of the Armstrongite groups would make good Gnostic's. The Gnostics were all about possessing secret knowledge that the unenlightened could not understand.  There is so much newly revealed hidden knowledge out there that there certainly cannot be much left to find out.  600 some groups all with some secret revealed "new knowledge" that makes them more special than the other.


The watchman is the person God will use to restore the knowledge to the church and to warn the nation of Israel.   The end time church will also see Elijah, the two witnesses and the resurrection of King David, and the saints, the return of the Father and Jesus Christ.

The membership of the Laodicean church will come out of the Philadelphian church.  The Laodicean era has far and away the best reward, but it will be far and away the hardest era to be in.  Some members will be deceived by the beast into instigating the abomination of desolation.  Self righteousness or lukewarmness will be a characteristic of this church.  As in all the church eras, there will be overcomers.

Each era of Gods church has had different knowledge and different rewards.  The Philadelphian era had to hold fast to what they learned.  Their reward is to be pillars in God's kingdom.  The genuine Philadelphians were to be kept from end time events.

With each era, old teaching from the previous era is loosed in heaven, and new knowledge is revealed and bound in heaven.  Scriptures that were right for one era have a different understanding for the next era.  We believed that “beginning” meant eternity when applied to the nature of Christ.  That teaching was correct for that time, but it is not correct now.

Since Jesus Christ has started building His church in 2001, the world has changed dramatically.  The English speaking nations are under constant threat of terrorist attack, and are gradually being alienated from the rest of the world.  Arab hatred is increasing, as God the Father stirs up the nations to punish Ephraim and Manasseh for their sins.  Homosexuality is rife in the English speaking countries.

What an exciting and dangerous time lies yet ahead for us in this last end time era of God's church.

"This era has started as a mustard seed and will eventually fill the whole earth."

That's not right. You have plenty of fertilizer, but mustard plants cover the surface of the earth. For your crop to fill it would require turnip seed.

Yet another psychotic break.

At least it wasn't wasted if they can get a following and make money at it.

Still... wouldn't it be better to be sane?

Page from the hymnal of this group, and also a page from the Pack/Flurry group's as well...

Written by Napolean 14th 1967
Sing Along With Here...
http://www.youtube.com/watch?v=l-lJZiqZaGA

I cooked your food, I cleaned your house, and this is how you pay me back
for all my kind unselfish loving deeds.. Huh??
Well you just wait, they'll find you yet and when they do they'll put you
in the ASPCA, you mangy mutt!!! And...

The Ezekiel scripture about Satan is merely the physical observation that Venus preceeds the morning star, the sun, and rises until it falls to earth becauce it is an inner planet.

Oh good, a new freakshow to lavish our loving attention upon.

"To be a member of God’s flock you would have to agree that Mr. Armstrong was a faithful servant of God."
UH OH! The biggest red flag possible.

"...I realised God was revealing the knowledge of the truth..."
Uh huh, sure he was.

"The Laodicean era of God's church began on the 1st January, 2001, when my wife and I acted..."
LOOK AT ME!!! I have cosmic signifigance. When I act, god sits up and takes notice. No, really!

Finally, and most of all, it's NOT NEW!!! It's called Arianism, after a guy who lived in Alexandria in the 300's AD named Arius. He taught that Jesus was a created being. Somebody needs to tell them this. Arianism has been debated now for 1700 years, and for the most part, resoundingly rejected. They're so uneducated they don't know when they've thought of something that has been thought of before, so they think it's new *facepalm* for like 12 years still without figuring out it's not new???

OMG so Jesus and Lucifer are brothers?! And Lucifer is Jesus's son?! WTH?!?! That's some fucked up shit right there! What have these guys been smokin' while they're "studying" the Bible?!

Ten bucks says the "friend" is one of the Unitarians that got turfed during the East coast "uprising" in the late '70s.

That's right, these people were put OUT of the Church for DENYING Jesus.