Apostle Malm: Jesus Made Good Pita Bread. That's Why He Had Followers 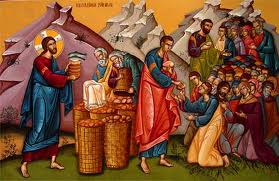 The apostle Malm is weighing in on the book of John right now adding his interpretation to scripture.  The apostle is also ticked right now that UCG is considering not requiring members to eat unleavened bread every single day of the DUB (as if any of them ever did anyway.)

John 6:8 One of his disciples, Andrew, Simon Peter’s brother, saith unto him, 6:9 There is a lad here, which hath five barley loaves, and two small fishes: but what are they among so many? 6:10 And Jesus said, Make the men sit down. Now there was much grass in the place. So the men sat down, in number about five thousand.
6:11 And Jesus took the loaves; and when he had given thanks, he distributed to the disciples, and the disciples to them that were set down; and likewise of the fishes as much as they would. 6:12 When they were filled, he said unto his disciples, Gather up the fragments that remain, that nothing be lost.
6:13 Therefore they gathered them together, and filled twelve baskets with the fragments of the five barley loaves, which remained over and above unto them that had eaten.

The apostle Malm interprets the above this way:

The people desired him to be their king because they desired the gift of physical food from him.  Their eyes and minds were on the physical advantages and not on the doctrine that he taught.

Yet this physical demonstration was an allegory of how he would be the bread of Life to come and feed all nations with the unleavened bread of his doctrine; of the purity and total freedom from sin, of his very nature, and the nature of the Father and their teachings and commandments.

The eating of unleavened bread every day of the Feast of Unleavened Bread [ulb] pictures the elect internalizing the fullness of the purity from all sin, that is God the Father and Jesus Christ.  To question the eating of ulb every day of that Feast, is rebellion against the command of Christ to eat ulb for seven full days; for  such a question to be an issue with church leaders of decades service, is proof of  a complete lack of zeal for the word of God and the commandments of scripture.


The mind of an Armstrongite is a terrible thing to waste.
Posted by NO2HWA at 12:14:00 AM

Why would they? WCG never "required" this when I was growing up, it was just one more of the confusions that arose AFTER the changes (don't get me started on "the calendar controversies" please -- I think those were purposefully engineered/encouraged by the Evangelicals to cause contention/confusion and strife).

I gotta say, growing up I don't recall ever hearing the idea discussed as to whether or not it was required to eat unleavened bread or merely abstain from eating leavened bread. The idea that if you don't eat unleavened bread every single day or you're sinning or rebelling, or whatever, I do think is a relatively recent addition to the the list of silly things to judge people over. The whole thing is silly from start to finish anyway. It's just another nonsensical invented "commandment" brought to you by apostle Malm.

My wife has to literally hide those "Egg and Onion" Matzos from me during the Days of UB , as Im addicted to them, especially with honey and butter on them.

She gets ticked off because we then run out, and dont have enough left for the whole seven day period. LOL! They are hard to get here, as the Jewish Community here in Cody,WY is about 3 people. We actually buy them online and they come via UPS. It takes several hours to get to the stores in Billings Montana that actually stock the things.

Worse than potato chips for me, them evil buttered Matzos!

PS- What is the deal with Ry Krisp? I dont get it. The stuff is terrible.

The idea of whether members were positively required to eat unleavened bread at least once a day or were only required to abstain from leavened products during the DoULB was discussed when I was a student and wcg member/employee in Pasadena during the years 1967-1978. I don't recall anyone ever giving a definitive answer, but I am old and that was a long time ago. But, it did come up as an issue. I seem to recall that a minister from Bricket Wood brought it up in a sermon one afternoon in Pasadena.

the egg & onion are my favourites too!

mix a little cream chease & olives together and spread it on thick....mmmmmm

All I remember was the perfectionistic drive to remove every fragment, crumb, speck, particle, and molecule of anything that you suspect might have at one time belonged to a prehistoric cracker or slice of bread. Geez Louise! It was just a symbol! Why the need to be so perfect about a symbolic ritual? It could have just been dust or sand, but it didn't matter, if you were unsure, then god says you are to be cut off from among his holy chosen elected peculiar special people and you were not going to be there when everyone else went to Petra and therefore couldn't be one of the 144,000 "firstfruits." I can just imagine what those who did get to go would have said. "Where's Jane?" "Oh, she missed a speck." "Too bad. I thought I liked her. Guess I was wrong about that!" What was the point of the many hours of methodical cleaning? How did that benefit anyone besides the clean house? It really didn't make any sense to me. Especially when people didn't even THINK about becoming better people or something like that. It was always very comforting to know that as long as you got every molecule of leaven out of your house, you could treat your fellow man like shit and get away with it. Thanks Apostle Malm, for keeping alive the old traditions that make me feel so warm and fuzzy inside.

If Malm et al thought about the symbolism for 5 seconds and realized the eating of ULB, asthey interrpret it, symbolizes taking in the Bread of Life, they'd drop it like a hot potato.

"What was the point of the many hours of methodical cleaning?"

To understand that because Christ, our Passover, was sacrificed for our sins, we must, as every person who was healed by Jesus was urged, "Go forth and sin no more." Doing the deleavening just hammers home the fact that, until we are all perfected, perfection just isn't possible in this world, and the here and now, however, as you always end up missing something, representative of the hidden sin in everyone's lives. It's an exercise in humbling oneself before God.

The March 1979 Good News has a really excellent Personal in it, explaining WHY we keep the Feast, and how it is a purely New Testament observance, NOT an "old covenant" one as the Evangelicals accuse us of. You can read the article for yourself here.

Last year the congregations here ended up using Carr's Water Crackers for Passover (or so I heard -- I am unbaptized and choose not to attend) because there wasn't a matzo to be found, which was strange, as they were available the year prior. I shall have to check if they are available again this year.

Barring that, making unleavened bread is quick, easy, and cheap; water, olive oil, flour (a spoonful of honey if you have any but I left it out), parchment paper, a glass to cut out rounds with, and a 400F oven. That's what I did last year.

They tasted like the real thing to me, I must say. I miss the egg and onion ones that came in the green and red box though. :-(

Ry-Krisp, however, is an artfully marketed cardboard packaging product that is somehow passed off as fit for human consumption. I quite disagree.

"What was the point of the many hours of methodical cleaning?"

LOL, you really don't have to spell out the "ministerial" answers to such questions. It's not like there's anyone here who hasn't heard that BS hundreds of times already. What's the point of keeping on trying to do the impossible? What is there to be understood about it? It isn't complicated. It doesn't hammer anything home. What it does do is keep the silly sheep chasing their tails. It keeps everyone distracted from how high on the hog the apostle is living, and the fact that he's not doing any of the things he's telling you to do. You're too busy trying to be perfect to have time to notice anything else. Yep, it's an exercise in humility all right. Well, maybe submission or subservience are more accurate. Meanwhile, the apostle is exercising his dominance. There is nothing new covenant about this BTW. It is a ritual that is lifted intact straight out of Judaism, perfectionism and all. Also, too bad all those covenants were made with a fictional being so there isn't a counterparty to any of them.

I think I recall a sermon from the 1960s or '70s to the effect that people with a right heart would be eating unleavened bread every day of the DoUB. You ate it on all of the occasions on which you would normally eat the leavened kind. We took Matzoh sandwiches to school for lunchtime, or some Rye Krisp. Believe me, it made all non-Jewish school mates ask questions! But, it was never a lake of fire type of thingie. That was reserved for those who knowingly and deliberately ate leavened bread, willfully sinning although they knew better.

I thought Malm was a certified wingnut, yet today he is in mourning for the loss of Red thug Hugo Chavez, as any other moonbat would be.

He's all over the cray-cray map.