Ron Wienland and his dingy wife, as the two witless witnesses, claim that his creature he calls "jesus" will be returning to earth on April, 21 2019.  In the meantime, WWIII has been raging all around us! Concentration camps, famine, deaths by the millions, rampaging Germans and Chinese, it has been a wild and woolly year!


This period of additional time revealed another remarkable total number of days that contained even greater meaning. This could be described as an extended deeper meaning to Christ’s coming. This change from 2012 to 2019 added another 2,570 days to the countdown for Christ’s coming. This too is awesomely significant, as this now gave the addition of two more very specific prophetic end-time periods of 1,260 days to that overall count.

Within this extension to Christ’s coming, the first of these two new periods is from May 27, 2012 to November 7, 2015. God revealed early on that this first additional period of 1,260 days was the 42 months mentioned in Revelation 11 that is about the “measuring of the temple” of God that would occur within that period of time, which is about the final preparation of God’s Church for the final work leading up to Christ’s coming.

This second additional end-time period of 1,260 days runs from the 8th of November 2015 to the 20th of April 2019. This count concludes on the weekly Sabbath that is in the midst of the first Holy Day season of that year, the Feast of Unleavened Bread. This period is now recognized as the time for God’s two witnesses to complete the physical fulfillment of their witness to the world.

Ron Weinland and his dingy wife Laura have spent the last several years doing NOTHING as a warning to anyone.  He considers his outdated books to be is witnesses.  As for Laura, she has proven to be completely incompetent.


Revelation 11:3-6 reveals that for a period of 1,260 days God will send His two end-time witnesses to prophesy with power throughout this time. Much of that witness and the power given to it is the writing that is contained in this very book. Toward the end of this period of time, they will be able to shut up the heavens so it will not rain wherever and for however long they say. They will strike the earth with plagues as often as they choose. Much of what is fulfilled during this period will have to do with the Thunders of Revelation that will be more completely fulfilled by those things they proclaim.

Within this extension of seven more years, there was then this addition of two more end-time periods of 1,260 days to the overall existing count for Christ’s coming. The five 1,260-day periods that occurred before the Pentecost of 2012, along with these two additional ones, now give 7 complete end-time periods of 1,260 days. Again, there is great significance in that number, as the number 7 is used for completeness in God’s plan. The week is complete with the 7th day Sabbath. The annual Holy Days are 7 in number and they give the complete plan of God for mankind. God has given 7 one thousand year periods (7,000 years) for mankind to be able to live out the first life He has given them.

Yet there is another period in all this that also needs to be addressed. The inclusion of two more periods of 1,260 days that were added beyond the Pentecost of 2012 give a total of 2,520 more days for the countdown to Christ’s coming. However, from the 27th of May 2012 (counting that day) to Pentecost on the 9th of June 2019, there is a total of 2,570 days. This number contains an additional 50 days that remain beyond these two final prophetic periods.

That 50-day period has already been mentioned. It is the time when God begins to pour out the Seven Last Plagues, which will lead to Christ coming to a world that has been humbled and ready to listen to him. As it has been stated, the day when his coming will be manifested in the atmosphere above the earth is the 21st of April 2019. It appears that this manifestation will be at the moment that the Wave Sheaf would have been waved before God on that day, which was in the midst of the Holy Day period of the Feast of Unleavened Bread (Lev. 23). This manifestation of Christ coming will be on the morning of the 1st day of the week that follows Passover that year.

The Wave Sheaf pictured the time when Jesus Christ would fulfill its meaning of being accepted as the first of the firstfruits of God’s great harvest—of those who are gleaned from the world to be in His Family—Elohim. Jesus Christ died on Passover and was laid in the tomb just before sunset on the 4th day of the week (Wednesday) in 31 A.D. After sunset, the weekly observance of the Feast of Unleavened Bread began. Then at the end of the 7th day (the weekly Sabbath) just before sunset, Jesus Christ was resurrected from the dead after being in the tomb for exactly three nights and three days.

Therefore, Christ was resurrected just before sundown on that weekly Sabbath. As soon as the sun went down, it became the 1st day of the week (Sunday). It wasn’t until the morning, Sunday morning, when the priests would offer up the Wave Sheaf, that Christ would then ascend to God. Christ then being received by God the Father would be the spiritual fulfillment of the Wave Sheaf. Later on that same day, after he had ascended and been received by God, he returned to be with his disciples and others for the next forty days.

After writing each chapter of this book, it was my practice to send it into the Church for editing to have it double-checked for grammar, spelling, and clarity. If something I had written was not completely clear to those who were editing it, then I could work on that portion to make it clearer. Although, there are still some things that will not be clear until later, as they are prophetic in nature and are not immediately understood. When writing this last chapter, I sent in the first half that covered the various combinations of counting that God had revealed in the overall count to Christ’s coming. There was one last section that I knew I needed to write—this section. However, I was not certain what needed to be covered in order to complete this book.

Only after about three weeks had passed did I then begin to write this last section that is entitled, “Two Great Signs.” My wife, who is the other end-time witness, was also reading the book and giving me feedback. After reading the book up to this point, she told me that I needed to read a specific verse in Revelation that she believed this book was fulfilling. Upon reading that verse, it became clear that it was indeed about what had just been written and that it would serve to be the primary means through which that verse would become fulfilled. 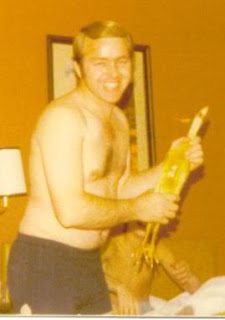 Bummer, I have to work that day😜

Ron, I see that you’ve booked a personal appearance for Jesus six days after federal income taxes are due. Two things come to mind. First, I hope that you have confirmation from Jesus on this booking, and secondly, please do pay your taxes this time just in case!

Those two errors have caused the total downfall of your ministry over the past decade. If you get it wrong this time, you will have no followers left!

I divided 0 by 0 and determined that Christ in not returning on April 21, 2019. Dividing 0 by 0 reveals that Mr. and Mrs. Weinland are fakes and false prophets. Their prophetic accuracy is 0%.

Lev 23:12 And ye shall offer that day when ye wave the sheaf a he lamb without blemish of the first year for a burnt offering unto the Lord.

If the wave sheaf represents Christ, then what did the he lamb represents?

This latest Weinland video makes it all completely clear ....

(copy link and paste into browser)

I remember HWA in a sermon in the early 80's say that it was likely that Jesus will return by the end of the decade of the 80's. It is 30 years later and I haven't seen Jesus walking this earth or sitting on a throne anywhere.

Boy, is Weinland persuasive. I think I'II join his church.

Here is another DAVE PACK VIDEO CALLED "A LOOK INSIDE RCG" You may find it amusing, but true.

What is he choking in the picture?

Well, everybody jot down his email address to send screenshots of this prediction to on April 22. :)

1.56 PM - the first post
Herb was saying that Hitler was the beast, with Christ's return a few years away.
It's all endless marketing. Hurry, hurry, hurry, send us all your money cause the end is nigh.

Does this hopefully mean that the day following this, that he would now shut up?

Of course he won't shut up! In Armstrongism, there is a long tradition of what I call "dyslexic Apostles". For lack of more precise terminology, this is someone who sees endtime events with the time-sequence distorted and garbled, and is unable to properly interpret them, just as a dyslexic reader sees letters mixed up and is unable to read words coherently, until his mind has been retrained. The followers are all very understanding, and as they do with other aspects of their beliefs and practices hope that eventually God will correct them , and that they will get it right. They are convinced that they are God's elite.

One wonders how many more decades followers will continue to believe that the prophecies which leverage the governance and tithing system are perfect and correct, but just delayed.

No SB. It just means "God is giving us more time"

No SB. The missed prediction will be blamed on the dumb tithe slave sheep otherwise known as “ the Church” for not being ready for Christ’s return. Richard