Did you know that Scriptures Predicted Bob Thiel and the Improperly Named "continuing" Church of God? 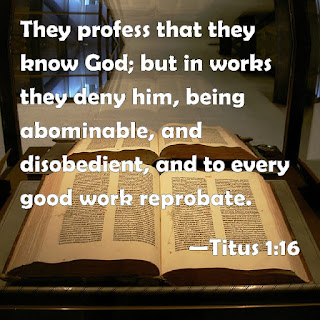 In his ongoing quest to prove he is legitimate in the eyes of Laodicean church members, the great Bwana Bob Thiel is pulling more rats out of his hat to make us believe he is the one and only TRUE church out there today do a work.  Scriptures point directly to him:


The New Testament does specify some in the last days:

We in the Continuing Church of God have those biblical signs. Plus unlike the Eastern Orthodox, we teach much more that agrees with the Bible.


Self-appointed Church of God leaders down through the decades have pulled scriptures out of the Bible AFTER they have started their little personality cults, to PROVE they are the chosen ones.  Anyone can go to the Bible and pull out some obtuse scripture to support whatever loony idea they want to hold.  Fake COG leaders are extremely adept at doing this.

Bwana Bob Thiel can spout all he wants that because he dreamed a dream and some crazy person on the other side of the world also had a dream does not prove he had the right to start yet another splinter personality cult of Armstrongism.

Bwana Bob is always looking for scriptures to legitimize himself, but for some reason ignores this one:

23 “Woe to the shepherds who are destroying and scattering the sheep of my pasture!”declares the Lord. 2 Therefore this is what the Lord, the God of Israel, says to the shepherds who tend my people: “Because you have scattered my flock and driven them away and have not bestowed care on them, I will bestow punishment on you for the evil you have done,” declares the Lord. 3 “I myself will gather the remnant of my flock out of all the countries where I have driven them and will bring them back to their pasture, where they will be fruitful and increase in number. 4 I will place shepherds over them who will tend them, and they will no longer be afraid or terrified, nor will any be missing,” declares the Lord.

34 The word of the Lord came to me: 2 Mortal, prophesy against the shepherds of Israel: prophesy, and say to them—to the shepherds: Thus says the Lord God: Ah, you shepherds of Israel who have been feeding yourselves! Should not shepherds feed the sheep? 3 You eat the fat, you clothe yourselves with the wool, you slaughter the fatlings; but you do not feed the sheep. 4 You have not strengthened the weak, you have not healed the sick, you have not bound up the injured, you have not brought back the strayed, you have not sought the lost, but with force and harshness you have ruled them. 5 So they were scattered, because there was no shepherd; and scattered, they became food for all the wild animals. 6 My sheep were scattered, they wandered over all the mountains and on every high hill; my sheep were scattered over all the face of the earth, with no one to search or seek for them.

7 Therefore, you shepherds, hear the word of the Lord: 8 As I live, says the Lord God, because my sheep have become a prey, and my sheep have become food for all the wild animals, since there was no shepherd; and because my shepherds have not searched for my sheep, but the shepherds have fed themselves, and have not fed my sheep; 9 therefore, you shepherds, hear the word of the Lord: 10 Thus says the Lord God, I am against the shepherds; and I will demand my sheep at their hand, and put a stop to their feeding the sheep; no longer shall the shepherds feed themselves. I will rescue my sheep from their mouths, so that they may not be food for them.

24 For false messiahs and false prophets will appear and perform great signs and wonders to deceive, if possible, even the elect.


2 Timothy 4:3-4
3 For the time will come when people will not put up with sound doctrine. Instead, to suit their own desires, they will gather around them a great number of teachers to say what their itching ears want to hear. 4 They will turn their ears away from the truth and turn aside to myths.


Acts 20:28-30
28 Keep watch over yourselves and all the flock of which the Holy Spirit has made you overseers. Be shepherds of the church of God, which he bought with his own blood.29 I know that after I leave, savage wolves will come in among you and will not spare the flock. 30 Even from your own number men will arise and distort the truth in order to draw away disciples after them.


Matthew 7:15-20 New International Version (NIV)
True and False Prophets
15 “Watch out for false prophets. They come to you in sheep’s clothing, but inwardly they are ferocious wolves. 16 By their fruit you will recognize them. Do people pick grapes from thornbushes, or figs from thistles? 17 Likewise, every good tree bears good fruit, but a bad tree bears bad fruit. 18 A good tree cannot bear bad fruit, and a bad tree cannot bear good fruit. 19 Every tree that does not bear good fruit is cut down and thrown into the fire. 20 Thus, by their fruit you will recognize them.

10 For there are many rebellious people, full of meaningless talk and deception, especially those of the circumcision group. 11 They must be silenced, because they are disrupting whole households by teaching things they ought not to teach—and that for the sake of dishonest gain. 12 One of Crete’s own prophets has said it: “Cretans are always liars, evil brutes, lazy gluttons.”[b] 13 This saying is true. Therefore rebuke them sharply, so that they will be sound in the faith 14 and will pay no attention to Jewish myths or to the merely human commands of those who reject the truth. 15 To the pure, all things are pure, but to those who are corrupted and do not believe, nothing is pure. In fact, both their minds and consciences are corrupted.16 They claim to know God, but by their actions they deny him. They are detestable, disobedient and unfit for doing anything good.

Bob Thiel recognizes a book called the holy bible that the Catholics assembled, therefor Bob Thiel and his improperly named cult is Catholic by nature.

If I used the book of Mormon to preach from, would that reflect who's teaching's I embrace?

Yes, Bob Thiel is a Catholic. No denying that.

Why, of course they did!

This is really laughable, the extent to which all the wannabees follow HWA's formulae and script. They want us to believe that the writers of the Bible were prescient, having a sixth sense that literally allowed them to have mental pictures of them and their "end times" works. The little afflicted dude who thinks the Holy Spirit allowed him to see America's captivity is caught up in this same delusion.

2000 years from now there will probably be scholars trying to determine why people believed such wacky things given our current level of technology.
One topic could be all the screwball names people give church groups.

And remember Bob said Loma's dream wasn't all about HWA, it was partly about him too...

They will look down from the planets and memorialize us as the Leonardo da Vincis or Jules Vernes who visualised things on paper before it was technologically possible.

And the gods might not be white or black after all but Chinesian. And the prime god might be the former wcg strategist and prime advisor who will not be named here out of respect.

You can't win nor can you ever use these scriptures to prove anything about one's special view of themselves. Bob often throws in "and we, (meaning himself), teach a more perfect understanding of the Bible" etc which also does not mean or prove a thing.


"Did you know that Scriptures Predicted Bob Thiel and the Improperly named 'continuing' Church of God?"


Yes, the Scriptures warned that many false prophets would come.

"...The New Testament does specify some in the last days:
17 ‘And it shall come to pass in the last days, says God, That I will pour out of My Spirit on all flesh; Your sons and your daughters shall prophesy, Your young men shall see visions, Your old men shall dream dreams. 18 And on My menservants and on My maidservants I will pour out My Spirit in those days; And they shall prophesy. (Acts 2:17-18)

We in the Continuing Church of God have those biblical signs. Plus unlike the Eastern Orthodox, we teach much more that agrees with the Bible.

Being faithful to the word of God is more important than signs and wonders..."

And yes, Bob T, you should be faithful as you said, but when will you be faithful to the word of God? You, self-delusional, believe your group has those biblical signs of Acts 2, but how so?

For one thing we are not living in those "last days" mentioned. How do we know that? The verse plainly said: "And it shall come to pass in the last days, says God, That I will pour out of My Spirit on all flesh."

Obviously, with all of the daily evils occurring worldwide, God's Spirit has not been poured out upon ALL FLESH!" When will you be faithful, and not boastful about yourSELF, enough to believe those words?

You still have your Mickey Mouse Millennium with Jesus reigning on earth for 1,000 years ahead, and a period of time when Satan exits a pit and again deceives the entire world...also ahead.

God's Spirit will not be poured out upon ALL FLESH, as that verse you quoted said, until after the second resurrection occurs. Those days are not today!

Let's ASSuME you wake up in that second resurrection, then what? Well, then you could quote Acts 2:17-18 as fulfilled prophecy. In fact, then it will be part of humanity's history. Can you not see that yet?