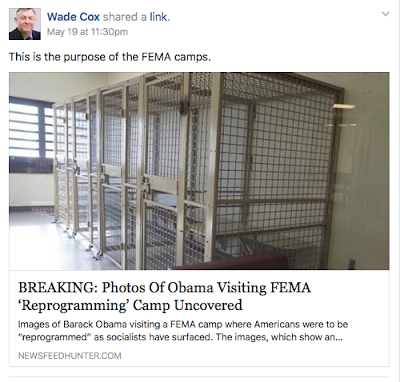 The minds of so many entrenched in Armstrongism have always gravitated towards conspiracy theories.  The more idiotic it is, the more some church members seemed to believe it.

The church has spent decades claiming that it would soon be punished for preaching the "truth once restored" because the governments of many countries would hate them for it.  Add to that, the absolute rubbish out of Meredith, Malm, Thiel, Flurry and Pack's mouths about invading armies of Germans, Chinese or Muslims, and it just compounds the problem further.

Wade Cox, who claims to have converted half of the African Continent to his LITTLE group works himself up into a lather almost daily over some perceived "evil" in the world.

This time it FEMA concentration camps.  For several years we had whack doodle on many COG related groups who was adamant that FEMA had a concentration camp built into the hillside of Glendale CA, just above Brand Park and the library.  The woman was too much of an idiot to know there was nothing there.  I have hiked those hills and know for a fact there is nothing there other than scrub brush.  This, however, never deters other idiots to jump on board and keep promoting the lie. 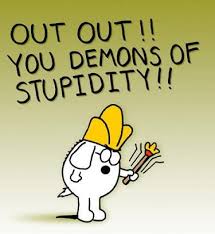 I have heard some men describe marriage as a "FEMALE CONCENTRATION CAMP" !

Maybe old Wade made a "faux pax" and really meant that instead!

It seems poor Wade is going down hill. His diabetes is now affecting his mind.....

Cox is the leader of the Armstrongite personality cult, the Christian Churches of God. You can read more about the absolute crazy beliefs of his group here and see a picture of the anointed one. 3/4 of his group abandoned him and formed their own group.

He may be crazy but there are plans to round up people up for forced labor that are still on the books (Rex 85 is the only 1 I can think of but a web search will show that what was trained 4 then is still being trained 4 this year just with different names). Oh & if you look up NDAA 2011 it has all of the us a marked as a warzone in times of state or federal emergency that means that us armed forces can be used in the us & this has been renewed every year since & I got that from both .gov & .mil sites not just from the Looney tunes sites out there.