It has been a long time since we heard from Eric King, the COG guru that was telepathically connecting with spirit beings from other worlds.  Eric has had an amazing journey that most Church of God members never dreamed about. After being part of Seventh Day Adventism, he ventured into many different groups searching for truth, which always seemed elusive.

Eric spent some time with the Hari Krishnas, sacred names groups, started his own group called Church of God Speaking to the Remnant where he witnessed to the splinter groups of Armstrongism, then branched out into starting a group that received divine revelation from spirit beings from other worlds and taught new age beliefs to his small cadre of followers.

It wasn't long into 2016 and early 2017 that Eric started believing he was the 7th Message Mormon:


All Mormon Christians should read this and pay attention. This is a foundational understanding to becoming a Seventh Message Mormon. If you do not understand this basic outline of the Christian Church as it moves through time you will not truly understand the Seventh Message which has come forth to the Church of Jesus Christ of Latter-day Saints and indeed to the entire world in this the seventh-time. You must grasp this message and all of what it contains. You must understand just where the church is in prophetic history. May you be brought here by the Holy Spirit and may you be sealed with this final day message.

It was through Sir Eric William King that Heavenly Father merged the Worldwide Church of God reformation to the Church of Jesus Christ of Latter-day Saints. This was prophesied to occur by Joseph Smith himself. It was revealed to Joseph Smith: ~

Eric has now reemerged into his new alliteration, evangelical Christian.  He now runs a ministry called Straight Christianity, though still wrapped up in end time malarkey like the rapture and Hal Lindsey. 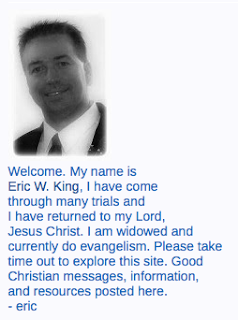 
Is Eric the 7th Messenger?

Eric King: The Worldwide Church of God Has A New Name

Eric King: ET Is Real! The Government and News Media Ignores My Truth!

That guy has had a confusing life.

I am glad that Eric seems to have emerged from the fog of his religious confusion. Nevertheless, with that kind of track record, why would anyone want to follow him? If we are desirous of following someone, let it be Jesus Christ - period!

eh...when he hits on something that he can make a living from he'll stick with it.

The guy has been on a personal odyssey, and through it all has somehow entertained the misguided notion that he could be some sort of guru or teacher.

It might be interesting to know what elements caused him to reject each point on the philosophical map as he travelled from place to place, but we have not been privy to that information either because he failed to share it, or because we missed it, having checked in on him only as he made his continuing pattern of outrageous statements.

Most of us here have become guru-proof. We’ve learned not to single-source our information or guidance. Even if we did, someone who does frequent major personal philosophical makeovers would be a poor candidate as a life coach or spiritual leader.
His journey is reminiscent of an old Country and Western duet, recorded by various artists, called “My Elusive Dreams”. The repeating refrain is “we didn’t find it there”.

Eric has had an interesting journey. But, reality is that he doesn’t have followers. They are better described as co-dependents. Better that he should fly solo.

Eric should describe himself not as L-D-S (Latter Day Saint Mormon) , but more appropriately L-S-D !

"eh...when he hits on something that he can make a living from he'll stick with it."

Let's see how long this lasts.