Several years ago when the alt.wcg-newsgroup was functioning there was a group of people who jumped on it proclaiming that a new  leader for the Churches of God had emerged. His name was Neville Stevens and his new Church was Zion Ministries.  Stevens was a former COG member who went off the deep end. Despite that, he had a small group (less than 20) people who clung to every word he said.  If you thought the worship of HWA was bad, worship of Stevens and his words was even worse. 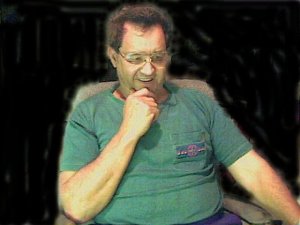 Neville in all his glory

Stevens had his followers wrapped up with the idea that they would be the instruments of God that would help usher in the tribulation.  They would be used as bearers of swords that would kill all who opposed Neville and the COG.  Many of them bragged about carrying swords to kill those who opposed the COG.

They would threaten and bully anyone who disagreed with them. They would have all kinds of names they would call people. They were and still are nasty people.  Yet through that nastiness they thought they were the most perfect COG members and Christians who ever walked the face of the earth.

Steven's writes are incredibly long and incredibly boring.  If you ever had any contact with Tony Almo's nutjob cult and the flyer's they placed on car windows you will quickly see the same writing style from Stevens.

Looking through one of his latest entries today, I saw the following from him about Abraham Lincoln.

A prime example would be the United States of America, though it wasn’t called a civil war, but the War of Independence.  It began as a challenge to the ruling body – which was the English Crown.  This war, believe it or not, was a fulfillment of Bible Prophecy.  What emerged was a nation which became the best that human beings could devise.  It was a Christian nation and it was established on a system of law and order, with clearly defined parameters so that everyone knew what the law required of them, along with suitable penalties for anyone who failed to comply.  The presiding government, including the President himself, would be appointed by the people and for the people, and they could easily be thrown out of office according to the will of the people.  The checks and balances were complete, and the nation prospered – at least until the other war, the Civil War of 1860.  This was the most insane period of America’s history.  And it all began when one man wanted absolute power over the states, and the maniac went to war against his own people!  But some form of justice prevailed in the end.  Thank you, John Wilkes Booth!  Well done!  God considers those who kill their own people to be satanic: Isa 14:19-20 “Like a corpse trampled underfoot, 20 you (Satan) will not join them in burial, for you have destroyed your land and killed your people.  The offspring of the wicked [one], (that is Satan) will never be mentioned again.”  I prefer not to mention Abraham Lincoln either!  By a bizarre coincidence, Lincoln’s body was not buried either, but later dumped in some sort of mausoleum, and covered with scrap wood, from where it was stolen – though later recovered.  Finally, years later, they put it in a hole and covered it with a concrete slab in a new mausoleum (the old one had started to collapse).  I don’t know of any other President whose body was subjected to so much bizarre humiliation and interment disruption!  It seems to be telling us something!  You may have your own opinion, but personally, I don’t like the man!  I can think of no good reason why God would’ve either.  The deaths of 620,000 Americans, plus an undetermined number of seriously wounded, should be enough to condemn any man who wages war against his own people.


So why is he pissed at Lincoln.  Part of Stevens problem is his clinging to the British Israelism baloney.  Blacks were less than and inferior beings compared to the British Israelite peoples.  So any man who went to war to stop slavery is despicable in their eyes, just as many in Armstrongism still think to this day.

Stevens then goes on to tell why the US is in such bad shape.....we refused to obey King George!

What proved to be unique about the American system of government is the absence of a royal or kingly line.  After getting rid of King George III, they didn’t want another king.  This too, turned out to be prophetic:  Hos 3:4-5 “For the Israelites will live many days without king or prince, without sacrifice (there’s no religious sacrifices conducted in America) or sacred stones (As a matter of fact, they don’t worship ‘The Rock’ either), without ephod (Levitical priestly robes) or idol


Then after a long tirade he gets into the meat of his message.  His followers and the TRUE followers of God will be lifting up swords to kill all heretics and blasphemers:


On top of this, the Order of Aaron takes a new role.  They must now be warrior priests in the Order of Melchizedek.  This is the New Order that is spoken of.  Elijah and the Levite Brotherhood are of this caliber, and they are prepared to fight for God’s Kingdom.  The enemy is already at work fighting to take the Kingdom by trying to expel the Jewish Israelis.  Does any rational person believe that God won’t order retaliation when the Kingdom of God is imminent?  With formidable odds against His servants the imbalance will be redressed.  Just to remind the reader of what this means, God has made it very clear: Zech 12:8-9 “On that day the LORD will shield those who live in Jerusalem, so that the feeblest among them will be like David (Wasn’t David a mighty warrior?), and the house of David will be like God, like the Angel of the LORD going before them. 9 On that day I will set out to destroy all the nations that attack Jerusalem.”  Don’t expect to see the Sons of Jerusalem walking around in prayer shawls and praying on street corners.  Or holding prayer meetings in the public places and calling on the Muslims to repent!  It will be far too late for any of that sort of thing, and the Sons of Jerusalem will be preoccupied elsewhere clearing the borders!


Of all the crackpot splinter cults of Armstrongism this one has the potential to cause harm to others outside the cult.  They despise Muslims and claim to be ready to go to any length to kick them out of Jerusalem and Israel.

Sound like a modern version of the Knights Templar. Potentially another suicidal Jones Town/Waco event in the future.

I call it "King David Christianity." It allows the believer to indulge in his or her violent tendencies but still claim to be a Christian.

I accidentally deleted you comment. Re-post if you want.

Guess we'll never hear him quoting President Lincoln's 1863 call to fasting and prayer -- the way all other COG's like to do.

The morning news today reminded me of this post -- as someone apparently stole copper from Mr. Lincoln's tomb.

But according to Wikipedia, the late President's body never was stolen -- there was only an attempt, after years in crypts and marble.

So even when it comes to the Lincoln grave, this preacher's rant isn't entirely built on fact.