Idiots In The Pulpit: Dancing Makes The Lord Cry 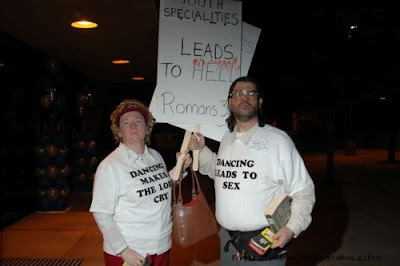 I take a few days off and the shit starts to fly! The latest blogs by this wonderful blogger "Banned by HWA" are astounding! The replies have been even more so, wonderful!

The mystical powers of divination, prophecy and the caustic irrationalism movement of armstrong-ism has become a menace above all, to those of us who value personal liberty. Freedom from mind control is not an effort that the "True Believers" of the armstrong theology care to embrace. The challenge is too much to bare.

The armstrongist are surrounded by ill-natured, dishonest hooligans who parrot the same nonsense as the dead old man, which is why they deeply believes that clever one-liners are a valid substitute for actual thinking. Well they are wrong!

The armstrongist cottons to anti-intellectualism, dishonest "gleichschaltung" tactics designed to bring us former associates back into line and to control as many aspects of our lives as possible.

Do these armstrong supporters know the difference between civilization and savagery? Do they understand how the cult leader can capitalize on the economic chaos, racial tensions, and social discontent of the current historical moment? Do they understand what it is to be used for financial gain? Will they or can they ever see through the lies?

Well a few can and do leave the fold of enslavement. But many remain. They are the indecent cheapjacks. Idealistic, without a sense of history or understanding of human nature, and they think that what they're doing will improve the world one day.

In the end conclusion I can say without error, that armstrongism may have been conceived in religious idealism, but quickly degenerated into sordid careerism from those who benefited financially from the heretical movement.

Someone give me an Amen!

Your absence made us think you had been raptured or maybe captured by a crazed Armstrongite.

I think we have to realize, well ok, we already do, that there is not one COG minister who has done the years of hard work in a discipline making them and expert in anything.

They haven't even been educated in theology, Biblical origins and religious thought enough to do what they are doing.

To be a COG minister all you need to be is:

A Non-critical thinker in what you read

Somewhat full of yourself

Suspicious of any historical, scietific or theological realities not thought up by oneself.

Able to connect the dots that don't really connect

Mostly sincere on some parts, somewhat on others and totally not when you rise to the top title.

Itching to ordain yourself everything from an Apostle to near Jesus himself.

Unable to read outside your area of expertise

Unable to use the Internet to read

In possession of a library card from the 1950's

In capable of saying, "I was mistaken." "I apologize," "I understand," "I see what you are saying," "How can I help?" or "Thank you for your support,"

and a whole bunch of other stuff...

As for (ahem) this picture - let's be thankful WCG and splinter groups are NOT like this.

They've endorsed dancing for decades, even at Feast sites. I even heard one WCG pastor read "seven reasons why you should dance" one Spring.

Anon: There have been times when WCG almost came close to this stance. I went to many a dance where deacons stood around with rulers in their hands and if unmarried couples got too close they would wipe it out (the ruler, that is). Spanky Meredith went into rage once when he went to a student dance in Pasadena and saw students doing the "bump" during the disco craze. You would have thought he had seen the couples copulating right on the floor. He instituted new rules on how to dance and for the most part the students ignored him, yet again. But you can bet he made sure to institute new changes when Herb rolled back into town setting the Church "back on track." While they may not thinking it is a sin to dance, it is just a few inches away from fornication in most of their eyes.

After making me roll around on the floor, frothing at the mouth while flailing my arms and legs and babbling incoherently, the Holy Spirit has informed me of WHICH dances will be in God's Kingdom.

Here are listed some of them-

The Missing Dimension in Disco