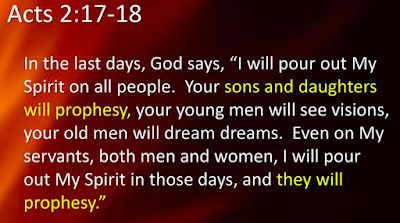 The great Bwana of Africa and deluded dreamer is once again trying to prove his self-appointment as a COG leader is the result of dreams.

The late Pastor General of the old Worldwide Church of God, Herbert W. Armstrong, basically said so in a 1981 sermon:


Joel 2:28-29 And your sons and your daughters shall prophesy, your old men shall dream dreams, your young men shall see visions: (29) And also upon the servants and upon the handmaids in those days will I pour out my spirit.
So there is a time coming when God will start pouring out His spirit on human beings. … Day of Pentecost, 3000 were baptized. Peter preached a sermon. They were pricked in their hearts. God began to draw them. God was now… Remember He said, “I will pour out of my spirit on all flesh.” All right, there’s a duality of that. (Armstrong HW. Building The Temple. Sermon, February 14, 1981)

Herbert W. Armstrong was correct about the time coming when God would pour out His Spirit as well the duality. There was a duality to what Peter preached in Acts 2–and that duality is for our current time!

Do dreams and prophets have any place in the Christian Church today?

Notice what the Apostle Peter taught:

14 But Peter, standing up with the eleven, raised his voice and said to them,“Men of Judea and all who dwell in Jerusalem, let this be known to you, and heed my words. 15 For these are not drunk, as you suppose, since it is only the third hour of the day. 16

But this is what was spoken by the prophet Joel:

We are in the last days.

Dreams and prophesy were expected for our day! In addition various fulfilled predictions and prayers, at least seven associated with the Continuing Church of God have had prophetic dreams which were later confirmed.

Would not that be expected of the most faithful remnant of the Philadelphian era in the last days?

Sadly the Church of God has been filled with hundreds of false prophets and outright liars over its 8 decades of existence. Never has a year gone by when there has not been some fool who has risen up in the church declaring himself a prophet, an Elijah or Elisha.  For 80 some years now every single one of them have been proven to be liars and frauds.

This has not stopped Bwana Elijah Elisha, Joshua, Amos, doubly blessed, self anointed, Bob Theil from self appointing himself as the end time Elijah, Elisha, and prophet for the end time church.  He seeks to prop up himself by declaring he has had dreams that prove he is the true prophet of God.

I can state for a fact that God did not appointed, anoint or give Thiel any vision in his dreams that sets him apart as a prophet.  He is a lair and a fraud.   He has bastardized the gospel message just as much as James Malm has. Why these men seek to whore themselves out to the law instead of following Jesus is beyond me. Sadly, their followers are being led into bondage instead of freedom. 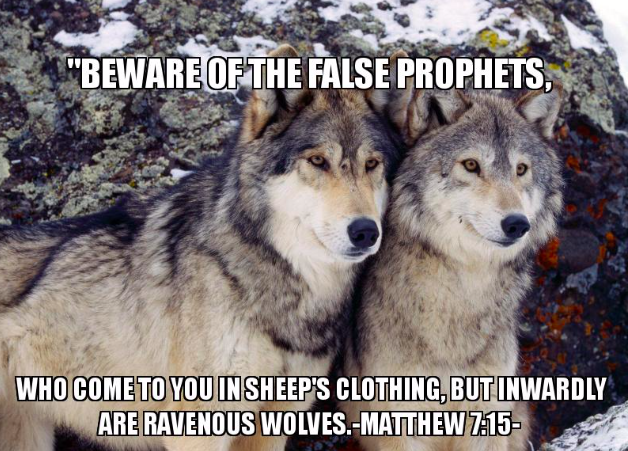 
THE FALSE PROPHETS (who came only to LIE, STEAL, DESTROY and KILL)

Gerald R. Flurry Plagiarist with “little book” that he copied from Jules Dervaes. Identity Thief with title that he stole from Jesus. Praises himself to the high heavens but still comes up short in his elevator shoes. Edited and changed HWA's writings. Given by Satan the Devil a “new commission” to suppress the gospel (good news) and replace it with a non-gospel bad news message. Caused massive division among former WCG people, wrecked families, and promoted sexual immorality. Gerald tries to pass off all of his own satanic abuse as the government of God. His satanic imposter cult epitomizes the tyranny of Satan.

David C. Pack More cunning and deceitful than most could imagine. A Bait & Switch scammer. Forever changing doctrines. He is really, really full of it and suffers from diarrhea of the mouth. An unusually covetous “common” thief. Rants and raves, yells and spits, lies and steals, and sounds like a demon. He is the “abomination that causes destitution” of his followers. Dave burns out all of his followers sooner or later.


The MINOR, Rinky-Dink, False Prophets (with Dung for Brains!)

Ronald E. Weinland Prophetic fantasy fiction writer. None of the things he wrote ever did, or ever will, happen. Ex-convict. Current con-man.

Robert J. Thiel Thinks of himself in terms that are “not realistic.” Looked to demons, and pagans, and FAKE NEWS on television, and got fooled by all of them.

Again my standard comment, Bob has things backward - he shouldn't have to "prove" to us he's a prophet using his questionable "credentials" so that we believe his interpretations are more correct that those of other COG prognosticators.

A prophet whose main message is, "I am a prophet. Look at me!" is not nearly so convincing as a prophet who actually warns of events before they occur, and who avoids words like "probably" and "possibly".

If Bob would correctly tell us today the intensity, path, and damage caused by the first severe hurricane of the 2020 hurricane season, it would be much more impressive than his current record. Unfortunately, given that record, we would probably suspect that he got the information from some Mayan weather demon.

I know of no prophet in the bible that said listen to me I'm a prophet...that's why I have difficulty believing Thiel....most of the doctrinal material on his site is very good, but the prophet thing damages his credibility.

Here we go again, the leader of the dreaming church of god butchering the scriptures while trying to legitimize himself and his church.

I guess Mr. Thiel is not concerned with bearing a false witness while he savagely devalues the scriptures to desperately try and legitimize himself. He claims one of the proofs that he holds the office of prophet is that he keeps the commandments, all of them! So he steals the fulfillment of Acts 2:17-18 from God, he falsely claims that this verse applies to only him and his church and he covets what isn't his or what has not been given to him.

So the only self proclaimed legitimate prophet in the Church of God today authenticity is based upon men ranked above him who had corrupted the truth, borne false witness and lied somehow correctly identifying him as a prophet and that he himself would have to keep all of the commandments which he doesn't do by claiming Acts 2:17-18 applies only to him and his church right now.

The whole world awaits the answers!

Even John the Baptist, who was indeed a type of Elijah according to Jesus, did not know that he was in that role or had that title!

Anonymous 5:48 AM said, "I know of no prophet in the bible that said listen to me I'm a prophet...that's why I have difficulty believing Thiel....most of the doctrinal material on his site is very good, but the prophet thing damages his credibility."

MY COMMENT - Which leads me to again ask this question... Is Almost Arrested For Sabbath keeping Doubly Blessed Profit Doctor from a mail order degree mill bitter Bob Thiel a Prophet or a Pastor General? He was rejected as a Prophet by LCG but that didn't give him the justification to start his own Armstrong Church of God franchise denomination. If he were truly a Prophet to the Church of God, besides the other points made by others here on Banned, he would have simply left the (L)COG, and simply started prophesying ON HIS OWN WITHOUT HIS OWN OR ANY OTHER CHURCH OF GOD DENOMINATION supporting him (like Dennis Diehl did in a much different way). As Mr. Armstrong use to say, God could use a donkey if necessary.

I am reminded as I write about this clown HWA wannabee (because he really wants to be a Pastor General head honcho and probably even saw himself as Rod Meredith's successor at one time in his own deluded mind), what ever happened to cartoon Bob and that great open door of animation that Bob said God gave to his Church? Is he still cranking out the cartoons? Are his cartoons "shaking the nations" as Rod Meredith would say??

What bob needs to do is to make a video of himself walking on water. That will prove he is legitimate. This is usually done by putting a plank about 1" under the water. Go for it bob. Nobody believes you; you need a miracle.


Anonymous at 11:08 AM said...“What bob needs to do is to make a video of himself walking on water. That will prove he is legitimate. This is usually done by putting a plank about 1" under the water. Go for it bob. Nobody believes you; you need a miracle.”


Bob Thiel, prove you're no fool.
Walk across the swimming pool.

But for the same success Jonah achieved in Nineveh, he needs to arrange to get swallowed by a whale and vomited up alive on the beach in front of TV cameras. When one of the chunks in a puddle of whale vomit stands up and prophesies, people pay attention.

Bob appears to be a sad, little man with an inferiority complex. He, perhaps like HWA, wants to be someone special. He may have convinced himself, but just can't convince many others and looks very pathetic in his effort. He is to be pitied.

Alex: Arroyo Grande was one of tonight's Jeopardy! questions.

Bob: What is I didn't see that coming?

Bob Thiel strives to impress us with some of his "last days" words with: "...We are in the last days.
Dreams and prophesy were expected for our day! In addition various fulfilled predictions and prayers, at least seven associated with the Continuing Church of God have had prophetic dreams which were later confirmed.
The Continuing Church of God is the only GCG-connected organization, and seemingly the only xWCOG-related organization, with so many of the confirmed signs of Acts 2:17.
Would not that be expected of the most faithful remnant of the Philadelphian era in the last days?..."

Just saying, "We are in the last days" does not mean we are; in fact, we aren't.

Those were Bob's words without any proof for back-up, unless he considers Acts 2:17 is proof.

Well, many verses speak about "the last days." Here's two of them:

Are those people, nations, too busy flowing to the Continuing Counterfeit "church" group?

Bob will die before he realizes the fulfillment of those 2 verses (which also will occur in conjunction with Acts 2:17), b/c they don't happen UNTIL some time AFTER Satan is loosed from the bottomless pit.

Of course, time will tell, regarding Thiel's Mickey Mouse Millennium too...