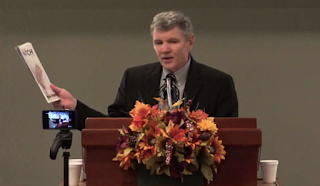 Mark Armstrong is on a tirade again about the government restricting churches and large gatherings of people. To him, this is all a hoax pandemic that was created to infringe on his rights.

Thanks to Hoss for this heads up....

Does it really matter which crisis they're selling? As long as they have power to generate fear among the population, fear so strong that the public immediately obeys “orders” being issued over every media outlet, the talking heads think they're winning. The angry birds that sit at the anchor desks are positively giddy with their charts and graphs predicting disaster. The idea that we're taking orders from the likes of the doctor who would keep the economy on ice indefinitely is bizarre. We've watched him pull faces, even drop his face into his hands behind Trump's back. But Trump has been gracious so far, unbelievably so. Dr. Fauci can't understand why the whole nation hasn't been put under a “stay at home” order, he said yesterday. Hopefully, the President won't listen to him, or the entire United States will be a lost cause.

So apparently we're waiting for “the numbers” to signal that it's “safe” to return to normal life. But who's supplying the numbers? Who's reporting the numbers? The same bozos that predicted Hillary in a landslide? The same goof-balls that have been banging on about global warming being an “existential” crisis? At this rate the curve may never be flattened, or whatever. They want Trump removed from office, and word is that the same individuals that brought us the fake impeachment nonsense are working to impeach him again.

The gnawing suspicion is that we're all being stampeded on the basis of made-up statistics and we're waiting for “numbers” the mainstream media will never report. What's really disconcerting is that they may have stampeded the President into destroying his greatest accomplishment, the roaring economy. We have no idea how the year will ultimately turn out. We're hearing predictions of recession at the very least, and a possible depression, all thanks to co-vid orders. Thinking about killing some of the downtime at the beach, or in the woods or at the park? Better think again. The authorities are outraged that some people may be engaging in enjoyable activities rather than sitting home soaking up the panic that every device is demanding.

The “news” people have foisted one false story after another upon the public. The “Russian collusion” story was delivered to the American public day after day for at least two years. When that failed to convince the public that President Trump was a Russian agent, they flipped to the Ukrainian phone call to claim that American interests had been sold out for political advantage. In fact, the sham impeachment hearings were still in progress when stories about the Chinese virus were beginning to surface. But, getting rid of Trump was the main objective and that's what his enemies went with. You don't suppose this panic is Plan C?  April 3 Update
Posted by NO2HWA at 10:05:00 PM

Even if the coronavirus were a scam, another of Mark's pet peeves (anthropogenic climate change) has also been silently progressing. Over the past three years there has been a moving hotspot in the Pacific Ocean that has killed the kelp beds (a huge ecosystem not unlike our forestland) all up and down the Pacific coast from Baja to Alaska. Millions of sea animals have perished, and others have migrated hundreds of miles from their normal habitats for survival because their natural food sources are nearly extinct. The Pacific Ocean is currently a mess! And it has a huge effect on the weather patterns of the entire continent.

I find it remarkable that President Trump actually awakened to the very real dangers of the coronavirus and has done the right thing and turned against the advice of his base in order to combat it. I sincerely hope that he will take this as a lesson and also reexamine his attitudes towards the authentic climatologists who he has been attempting to repudiate and fight.

From everything I read, this virus causes an excruciating death, and even those who survive the most severe cases are never the same. There will be Alzheimers-like symptoms for months or years, and extensive (and expensive!) physiotherapy, medications, and lasting limitations for the balance of one's life.

There is one remark I never heard made about Mark Armstrong. "What a bright young man! He's really going to go places in the work!"
Now he has inherited an audience and uses it as a soundingboard for his assininity.

Honestly, I believe the numbers are much lower than what is being reported (as to not panic even more), an already panicked American public. This is biological warfare! Nothing less. If it isn't why do they keep comparing the deaths to what occurred on 9/11?

This is no ordinary disease. How it got here, and to the rest of the world is irrelevant. The fact is we have to deal with it. I know 2 people in the Northeast who have the Corona Virus. They have been absolutely miserable for almost 2 weeks. If Mark Armstrong knows someone personally who has it, he and other so-called COG leaders might be singing a different song.

This pandemic is exposing how out of touch many leaders of COG organisations are with God. Not to mention how inadequate they are in basic knowledge of world economys. Even if this is not sent by God, He certainly is allowing it to happen. Much we do not know at this time.
A few COG leaders are doing the right thing but many big known names aren't. This situation is going to shake the COG movement to it's very knees. Many big names need to wake up and realize this. This pandemic is no snow storm of 1982.

We don't have excruciating deaths.

Before people are brought to IC they are asked what do to if the body does not seem to conquer, if not........ in consultation with the family the ventilator is switched off. The sleeping person does not suffer.

"Panic" is as likely to unite the nation behind their President as it is to peel support away from him. Already polls are showing an uptick in support for Trump, while Biden hides away and exposes himself to the public just enough that they don't forget he's still with us... and even in those short exposures he's still a very un-Presidential gaffe machine. So, it will all depend on the state of the nation in November. If the nation is in the dumpster because massive government intervention failed, why would anyone vote for the greater government intervention desired by Biden? And if the nation is pulling together and healing, rebounding after a hellish summer, people are likely to vote for the incumbent rather than risk another downturn.

Yes, it's possible that the crisis could turn some voters against Trump, but it's far from assured.

Mark Armstrong is a scam!

All that this "stay at home" is doing is hurting his/their bottom line. I find it hilarious.

God destroyed the WCG, but in their stubbornness they created dozens if not hundreds of mini-WCG's. Now it looks like God is destroying them. This is a great way to force people into a one on one relationship with God.

Yes, Mark Armstrong is NOT the sharpest tool in the shed, but he is following in the steps of his father and grandfather (maybe genetics is determinative in this instance). His endless preoccupation with defending Trump is tiresome. I know that Trump and his supporters can't stand it, but most of us (the American people) are NOT thinking much about him these days - We have more important things on which to focus (like the pandemic that currently threatens our lives and livelihoods). As for Trump doing the right thing in this current crisis or adopting a more enlightened perspective on climate change, only time and circumstances will give us the answers about him. I do know that Mark Armstrong's statements are NOT making any positive contribution to our survival of this existential threat!

Of course most will say they're not fanatics nor haters, but they only delude themselves.

You can tell by their seemingly never ending comments about him either pro or con, but they seem unable to see it in themselves!

He seems overly concerned with repeating talking points by talking heads (airtime filler for the networks).

The problem, Kev, is that our President is such a polarizing figure that it is nearly impossible to view him in other than black and white terms.

I commend him for his belated turnaround regarding Covid 19, but he has also exploited the pandemic to quietly issue executive orders implementing many of the most controversial portions of his agenda while the gen pop is focussed on the virus. Farmers are planting right now for the summer crop, and Trump has shut down the US-Mexico border meaning that the skilled laborers who normally do all of this work are now not available. He's also rolled back the vehicle emission standards, meaning that climate change will be exacerbated, and people in big cities will be suffering the effects of greater pollution. He is continuing to stack the courts with hard-right judges, elliminating impartial decisions. All of this, as America's attention is deflected to Covid 19.

From his TV show, I actually liked him, his sense of humor, and his basic personality. As our president, not so much.

Virus scam or not, one thing is clear. The older you are the more the chance this virus has of inflicting negative repercussions.

Stay closed Mark and do the right thing.

Bob, as I've said before, there wasn't much of a choice. I was personally for Carson or Fiorina in the primaries but once they got to WV the decision was made.

It was either him or Clinton and I've never liked the Clintons. After Skolkovo I'd never vote for her.

At least Trump has been saying for a long time, long before his election, that we were too reliant on China.

Personally I like Trump but I wouldn't call myself a fanatic. I like how he plays mind games with the media. They think he's dumb but they're really the dumb ones imo.

As opposed to stacking the court with hard-left judges eliminating impartial decisions.

Bob, we'll never agree on many things, AGW is one, but that's ok if we can keep it civil.

For those who've never heard of Skolkovo:

Here's another on Skolkovo merely from wikipedia.

Just one more and then I'll let everyone do their own search on Skolkovo.

He seems overly concerned with repeating talking points by talking heads (airtime filler for the networks).

Maybe we all should be.

DON'T WORRY ABOUT THE GOVERNMENT by Talking Heads

Loved ones, loved ones visit the building,
take the highway, park and come up and see me
I'll be working, working but if you come visit
I'll put down what I'm doing, my friends are important

I see the states, across this big nation
I see the laws made in Washington, D.C.
I think of the ones I consider my favorites
I think of the people that are working for me

What benefits are there in worrying about the government?

Can you change anything?

Can even a group of people change anything?

Most idiots in the cog don't even vote. Though a single vote won't change anything.

Better off worrying about something that we can change. Like putting on a mask to keep our loved ones safe from a potential virus.

Worrying about the government is ignorant!