LCG: God Will Not Allow Our Rotten Practices to Continue... 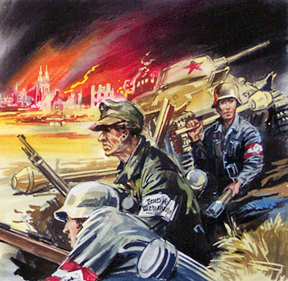 Documented false prophet Roderick C Meredith has laid out the path that will happen to the United States of America before the Germans arrive and throw us all in concentration camps.  At least those of us who have survived the famines.  then your sorry asses will be hauled off to Europe to be slaves for the powerful Europeans.  So in true Church of God style he has to come up with a large list of "points."  Some things never change!

First, America’s downward spiral will continue until the nation is destroyed. Of course, there will be minor ups and downs along the way. But, unless Americans repent, the God of heaven will “break” their nation’s pride and power—certainly including the financial power that has made possible the “American dream,” which so many around the world have admired.

Second,the military power of the English-speaking nations will increasingly be weakened and will finally be destroyed.
Unless we repent, we will never again win a significant war. Before you start smirking, just “watch” for a few more years and see it happen.

Third,a combination of powerful “natural” disasters will continue, with increasing ferocity, to weaken and destroy the power of the Anglo-Saxon-Celtic-descended nations. For Almighty God does “control the weather.”

Fourth, because of the above crises, the American and British-descended nations will soon face increasing famine and drought. With more and more people out of work, unable to afford the rising price of scarce food and water, there will be a shocking rise in the number of families going hungry. Expect not just “job riots” ahead, but also “food riots” and massive civil unrest as a result!

Fifth, disease epidemics will increasingly occur! Sexually trans-mitted diseases such as AIDS, syphilis, gonorrhea and herpes will lead the way because of our nations’ vile lifestyles and godless ways. The Eternal God will not allow our rotten practices to continue without the penalties of such debauchery becoming more and more prevalent. God is not mocked!

Sixth, the sovereignty of the English-speaking nations will be terribly weakened and even overcome by immigrants whose values are opposed to the heritage of their host countries. Even now, we see the stirrings of the “Reconquista” movement in the American Southwest, through which certain Hispanic advocacy groups are pushing to see major parts of California, Arizona, New Mexico and Texas “reconquered” by Mexico. Because of this political pressure, and also the social pressure caused by drug running and other crimes in northern Mexico, the U.S. can expect that the terrible violence along its southern border will continue and intensify—with increasing thousands of people beaten, mutilated, raped and murdered!

Seventh, in a phenomenon previously confined mostly to Europe, Islamic radicals will begin to assert themselves in the U.S. as never before, demanding that their Muslim laws be allowed to govern American citizens.

Eighth, China will not be the great power of the 21st century. Beset by increasing financial and social problems, Chinese influence will wane and a German-led “European Empire” will surge to the fore in world affairs.

Ninth, today, most observers see a modernized and confused Roman Catholic Church, wounded by scandals of pedophilia and other immoral practices. Contrary to many expectations, prophecy reveals that a re-energized, unified and powerful Roman Church will emerge as a world-leading influence over the next several years.

Tenth, fearful of the power of this religio-political revival of the old Roman Empire, a group of Arab states in the Middle East and North Africa will form an alliance, led by a ruler described in Scripture as the “king of the South” (Daniel 11:40–45). This king and his forces will provoke or attack the coming European Beast Power. Their action will precipitate a dangerous Middle East war that will eventually crush the spreading threat of Islam.

Eleventh, God will, more than ever before, literally “shake” the American and British-descended peoples with earthquakes.

I worked at one of the CNN networks in 1991 -- and when the U.S. and coalition forces attacked Iraq to liberate Kuwait, I watched my words in news scripts very carefully.

I waited to see what Joseph Tkach Sr. would say on Kuwait. Would he say it's NOT a war, because Congress never formally declared one based on Constitutional requirements? In the meantime, I called it "fighting.... battle" and similar words in scripts.


Finally he wrote in the Worldwide News: "The war is over." If he declared it war, it must have been -- and Mr. Armsrong must have beebn wrong.

So was the recent fighting in Iraq a "significant" war? I guess we'll have to wait for a ruling from Dr. Meredith on that.

If you pull their belief in British Israelism from all of this, they are left with nothing.
That's why they continue to preach BI in spite of the massive factual evidence against it.

Now, if you want to go to St. Paul for some answers, Paul equates Christians with Israelites. Christians are the Israelites of the New Covenant. Thinking aloud here, if you believe that the USA was founded as a Christian nation, and that we lost our Christian values sometime in the 1960s, you could almost make a substitution in Herbie's prophetic theories, and keep right on chugging along. However, God's pattern was always to spare nations so long as righteous ones were present, and there is a huge population of God fearing ones in the Bible Belt of the USA. But, alas, Armstrongism calls these "Christians falsely so-called", good fruits notwithstanding.

It's no wonder that one author called HWA "Mr. Confusion" decades ago.

Sixth, the sovereignty of the English-speaking nations will be terribly weakened and even overcome by immigrants whose values are opposed to the heritage of their host countries.

That would be, of course, India, where 500 Million People speak English.

So Jesus says, Come unto me all ye that labor and are heavy laden, for my yoke is easy and my burden is light.

LCG says, Come unto me now that I've terrified you and dazzled you with what any moron can make up, time is short, and we will take you in.

Which sounds more encouraging to you?