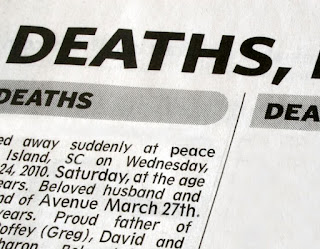 From an LCG source:

We received the news from LCG that Brian Kaidannek died earlier this week of a heart attack. He was 68. So far I can't find an online obituary.

It might or might not be blogworthy, but his name came up within the past year. After Brian finished up at Nortel and then left LCG, he became a minister in RCG. Brian went from standing up for people and for what was right, and from never being a yes man, to one of RCG's dedicated zealous lackeys. He became more ministerial and one of RCG's yes men than the ones he had rightly criticized, and then he left RCG with his son Greg about a year ago.

Mr. Pack, who declared last Feast of Tabernacles that he was a prophet and had been for some time then went on to make a plethora of predictions of when Christ would return, none of which obviously came to pass. Yes, he has said he had never claimed God spoke to him, that is true. But brethren do not ignore the clear warning in Deuteronomy 18:22

“When a prophet speaks in the name of the LORD, if the thing follow not, nor come to pass, that is the thing which the LORD hath not spoken, but the prophet hath spoken it presumptuously: thou shalt not be afraid of him.” Many times, we have heard, “On God’s authority, I am right!” He HAS spoken Presumptuously! And then to say he was foretold to be wrong is just foolishness. We do not serve a God of confusion! Recently he has stated he is not a prophet. When one says they are a prophet they are either a true or false prophet and later claiming not to be a prophet becomes a mute point. Now again Mr. Pack claims to be Elijah and a whole plethora of other titles; and has once again predicted that we can’t go past Thursday, just before Trumpets. Again his prediction failed and he proved himself false. How can we sit at the feet of, and listen to, this false prophet?

Though filled with error on even basic understanding, Greg Kaidannek’s letter is long and reasonably well written, proving much time and thought. He admitted thinking long and hard about writing it. Yet shocking to everyone here at Headquarters, he never uttered any concerns. The Headquarters’ contact for both of these men spoke with them biweekly. They had abundant opportunities to express disagreement or confusion but never did.
Greg Kaidannek’s portrayal of his time at Headquarters is flat wrong. As one who has been in scores of meetings, there is always a chance to ask questions. His problem was not questions; it was attitude. Personal spiritual issues (not prophecy) led to him being demoted in rank (which rarely happens) and given a field assignment over a small congregation. God is patient and merciful, so we hoped that this correction and re-assignment would help him develop the heart of a shepherd and learn to focus on others. His letter made it evident that he chose not to address his problems, but instead justified his transfer and allowed bitterness to set in.
Brian Kaidannek was fully aware of his son’s issues. He agreed this was the right move to help him. In private discussions at Headquarters, we were concerned that if Greg Kaidannek left, his father would follow him. Again, sadly, this proved accurate.

I'm filled with sadness that the wrong guy from RCG has died.

The RCG letter on the Kaidannek's resignations is worth reading many times over. It's an excellent comeback example from the Ministry of Truth, and a template of all who leave or criticize the church.

"..there is always a chance to ask questions (but) his problem..was attitude."
Ha, ha, ha, ha, ha.
Try questioning any ACOG minister. They'll give you a mental fat lip.

So sad to hear this. Now the crazy people will come out of the woodwork and claim he died because God punished him for rebelling against David Pack, The biggest liars about this are the minister themselves that start this crap. Members have been conditioned to believe this.

Shame on you for such a hurtful comment. This family is grieving. To wish that pain on anyone is despicable.

WHAT ABOUT THE TRUTH said...

You don't need to look far, I have many CDs with Dave Pack claiming that all who have gone against him have either died or become physically incapacitated. The first man he mentioned was Joe Tkach Sr.

My condolences to the Kaidannek family.

Reading that felt very much down the rabbit hole. Is this what Jesus Christ wants christians to be discussing?

9.11 PM
Try reading the Psalms of king David.
Have you ever noticed the popularity of revenge movies?

Wanting revenge Anon 1:55 says more about you in the long run. Is that what EVERYTHING is about revenge ?