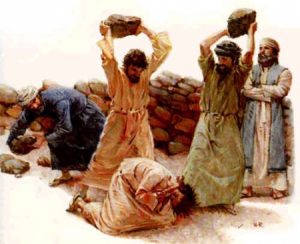 And on it goes from Apostle Malm.  Apparently a multitude of opinions on stoning your child is required.  So when you are all in full agreement you are allowed to stone your children.  There are many in Armstrongism who think this will be a law in the millennium. Stupid, stupid people! 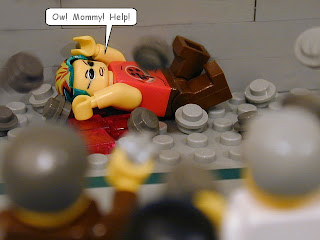 18 If a man have a stubborn and rebellious son, which will not obey the voice of his father, or the voice of his mother, and that, when they have chastened him, will not hearken unto them: 19 Then shall his father and his mother lay hold on him, and bring him out unto the elders of his city, and unto the gate of his place; 20 And they shall say unto the elders of his city, This our son is stubborn and rebellious, he will not obey our voice; he is a glutton, and a drunkard. 21 And all the men of his city shall stone him with stones, that he die: so shalt thou put evil away from among you; and all Israel shall hear, and fear.

Judgment is not to be made by any person alone but by duly constituted authorities.

The following is in main a reference to Christ and how he became a curse for us, bearing our sins and being taken down before the sun had set.  This also prevents the common abomination [if that time and the Middle Ages] of hanging people for days and weeks as an example to wrong doers.

22 And if a man have committed a sin worthy of death, and he be to be put to death, and thou hang him on a tree: 23 His body shall not remain all night upon the tree, but thou shalt in any wise bury him that day; (for he that is hanged is accursed of God;) that thy land be not defiled, which the LORD thy God giveth thee for an inheritance.


Malm pretends he is a Jew keeping the law as interpreted through the "new covenant."  On that he is a liar.

Even the Jews do not believe the above regulations to be valid or ever to have been enforced or carried out:


The rebellious son first appears in Shemot and then again in the last book of the torah, Deuteronomy.  In both texts he is stoned.

“If a man have a stubborn and rebellious son, that will not hearken to the voice of his      father  or the voice of his mother and though they chasten him, will not hearken unto         them, then shall his father and his mother lay hold of him and bring him out unto         the        elders of his city… They shall say unto the elders of his city: This son is stubborn and             rebellious, he doth not hearken to our voice, he is a glutton and a drunkard. And all the men of his city shall stone him with stones that he die; so shalt thou put away the evil          from the midst of thee; and all Israel shall hear, and fear” (Deut. 21:18–21).

His stoning is remarkable because the crimes of which he is convicted are not otherwise capital offenses.  Assault and even manslaughter are punished with compensatory damages and exile to safe cities respectively.  Exodus 21: 12-19.  The general rule changes if the victim or the accuser are either the father in Shemot or both the mother and the father in Deuteronomy.

Long before modernity, Jewish tradition rejected this practice and even the spirit of this practice.  Over several pages, the Talmud severely limits the application of this law – it could only apply in the small window between Bar Mitvah (onset of legal liability) and physical maturation (growth of body hair), a window that is estimated in the Talmud to be about three month, and there are further limitations on top of that. For example, if the rebellious son flees from his trial and then becomes an “adult” he is no longer liable.   There are no records of this punishment actually occurring.  Parents are prohibited from hitting their adult children.

The offensive law and ethos that give rise to it is effectively erased.  Its presence in the torah exists as testimony to what is possible in the sands of time and the light of day.  In the Jewish future, I imagine men and women will sit down to write Dvar Torah’s on how our generation effectively erased the prohibition on same-sex relationships and overarching gender inequality from the text.  They will look at those prohibitions as we look upon the stoning of the rebellious son – as a testimony to Judaism’s capacity to remain, after thousands of years, a religion in the process of becoming. Gather the Jews

Did Armstrongist Apostle Malm have any sons?

("Did" being the operative word!)

This man is one sick god haunted puppy.

Is it my imagination (oh, do please tell me it is) that possibly -- and I'm straying into dangerous speculation here -- that the Apostle Malm possibly could be more harsh than Evangelist Roderick Meredith?

Difference in rank, I would suppose.

Clearly, Apostle Malm considers himself to be the "It Girl"!

"This our son is stubborn and rebellious, he will not obey our voice; he is a glutton, and a drunkard."

At age 20 they become adults and can go off on their own.

This verse is probably directed toward those in the absolutely crazy later teen years.

Some adults these days, terrorized by such drunken, drugged-up and violent perverts, might see great value in the laws of God keeping a lid on such behavior.

The fact that some bad people have gone to wrong extremes and over beaten their young children for no good reason does not prove that God's laws are wrong.

"It Guy" rhymes with "Shit Guy"

Another "ouchie" for Malm.


Around high school days an old couple came by to try to sell us their car. It was probably over 25 years old at the time and I think they only wanted about one or two hundred dollars for it. We did not buy it, but I remember feeling sorry for this poor old couple.

This couple had a son that the other kids in school were afraid of. Some of the teachers were probably afraid of him too. One day, the son punched his mother in the face, knocking out all her teeth.

This is the sort of thing the laws of God were meant to deal with and prevent.

The fact that some so-called "ministers" in the WCG stirred up some so-called "parents" in the WCG to continually whip their little children 40 times for every little real or imagined fault (never stopping at 10 to show any mercy, or even at 39 to make sure they do not overdo it) does not mean that God's laws are wrong.

There will always be stupid people going to evil extremes.