Were shepherds out in the fields at night in winter? 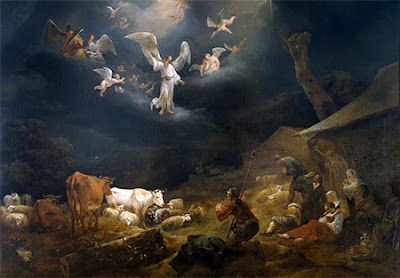 I love these Biblical facts. The New Testament can answer any questions posed to it.

UCG is so steeped in the traditions of Armstrong and Merediths antiChristmas myths that they were then and still are unable to visit any other understanding than want their closed minds want to believe is right.

Even better..the Heavenly Hosts sang only for a few lonely shepherds. Why not make it obvious and go sing to all Jerusalem? Never literally happened so frosted sheep are moot.

I read this post. More information about these types of subjects than I usually read.
I think the only point to be made about the time of Jesus' birth was none of the writers chose to reveal it - meaning they did not consider it important.

Christmas - along with the trinity and many other doctrines - was introduced well after the start of the Christian church.

Today Christmas is mainly a secular holiday used to make retail profitable, some people broke, but the more sensible people happy with thinking of others and giving gifts plus family get togethers.

I personally don't keep Christmas, but if this was the worst thing people did, the world would be a much, much nicer place.
I still give gifts to my family - but during the year and birthdays.

So, if you cannot do that it is all useless.

The only people that doesn't celebrate x-mas are those leftwing nutjobs who voted for Obama.

You can definitely see your skills within the article you write.
The arena hopes for more passionate writers such as you who are not afraid to say how they
believe. At all times follow your heart.

Father Snow preceded St. Nick. Xmas goes back a long way. Some say back to Stonehenge which was designed to track the seasons/solstice. Traditional Christianity is indeed heavily influenced by paganism, but I'm okay with that. Jesus was not European, he was an alien who brought Middle-Eastern ideas into the West.

What does Christmas do for the birth of Christ? I know some try to make it a false worship or a sinful behavior. I am old enough to look at Christmas from different view than it appears to many today. As a child in the early 1930s. The closest thing to it being a worship day was when we went to a meeting house where my Grandpa who was an elder in the OGBB fellowship would read about the birth of Christ in the bible . I do not remember if there was a song or a prayer or not. I do remember that we went home my dad and other family members went rabbit hunting. We never had a Christmas tree or any of the other decorations we see today. There is no sin in genuine worship on any day nor is it wrong to read the scriptures about the birth of Christ or to worship Jesus as our Lord and accept Him as our Savior. I do believe there is a lot of sinful behavior associated with the way the world celebrates it today.

weather forecasts for Bethlehem and Jerusalem.

Thank you for these posts on Christmas! I find them very beneficial in my journey out of the lies of Armstrongism.

I enjoy a good fight and religious brawl on this blog at times.

In the late '60s and early '70s, the major holidays were such that if you forgot a particular ingredient for your Thanksgiving or Christmas dinner, you were pretty much out of luck, because all of the stores were closed. There were Christmas pageants in the public schools, blatant Christmas parties in the work place, there were public decorations everywhere including nativity scenes, and radio and television had a high percentage of Christmas orientated programming. This was prior to the moves to secularize which I believe came into play in the 1980s. There were certainly massive jams at all of the major stores for the weeks leading up to Christmas, and If I recall correctly, this was prior to the building of Santa Anita Mall, because I seem to remember that when my brother came to town, we went to the parking lot of the race track to fly a kite with my oldest son.

In the '80s, ol' Vic, the proprietor of the chopper shop in Baldwin Park where I bought a lot of my bike parts was in open revolt against what city government was trying to do to remove the religious aspects of Christmas. He lavishly decorated his shop, particularly the front windows, on which he had painted "Jesus is the reason for the season!" By that time, choppers were just about as endangered as Christmas, and by the end of the '80s, Vic had closed the doors of his once thriving shop.

New Years Eve in 1970s Southern California was a time for vehicular shenanigans. I can recall getting friends together and cruising the traffic jams that were Orange Grove, and Colorado Blvd. If you weren't a car or motorcycle freak, the Hippies were in full bloom, and partying in many ways as they camped out on the Blvd. What is now considered to be classic rock was the new music of that day, and the music you heard emanating from the cars was generally coming from radio stations KMET and KLOS.

It was a fun and exciting time to be a young person. Some of the trends in play were so massive that, try as they may, government and the law could not clamp down on it all. It was also before the pre-greed 1980s, when suddenly everything began having particular financial value, and priced out of peoples' ranges. There were old buildings in relatively safe areas where you could live cheaply, and the prices of Gibson and Fender guitars hadn't gone through the roof. You could pick up a vintage car for anywhere between $25 and $1,000, and I'm talking about '32 Fords, and '40 Fords or '51 Mercuries, '55-'56-'57 Chevies.

Kids today don't know what they missed out on! Merry Christmas everyone!

Thanks for the heads up, those stories are so Zen, so relaxing as the intro to "The streets of San Francisco" while the markets are crashing for tax purposes.

It evokes an image of Sharon Tate. Wierd sensation.

Karen Carpenter and Amy Grant???? You must be a strictly commercial pop music dude, nck! My friends and I were into Mountain, the James Gang, Led Zeppelin, Humble Pie, The Who, ZZ Top, Lou Reed, the Eagles, Neil Young and Crazy Horse, Aerosmith, the Allman Brothers, and Lynyrd Skynyrd. Stuff that would make you want to throw Beethoven into the Garbage.

I am 100 percent attuned for business to consumer. I'll recommend the lynrd skynrd christmas album for the inlaws.

No wait I'll do a you tube jackson five search.

Most bands you mentioned I hear while on the move, not when stayed put.

Another glimpse into my world. Just witnessed a Palestinian Christian childrens choir, lead female singer born on the exact fields of the sheep in discussion on the other side of the wall. Venue, church built by Der Kaiser to establish a name for protestants in the Holy City.

I did not mention lynrd skynrd. Yes I do enjoy the sight of girls in embroidered dress, but would support pussy riot any minute when they annoy putin by doing their thing in a church.

Oh jeez, nck. Was that last paragraph the by-product of too much Christmas cheer? Medical marijuana? At least I know you’r having fun, and I guess that’s part of the rebel outlaw creed!

I am sentimental enough to have the embroidered singing christian palestinian girls bring tears to my eyes. And it helps that they look like queen rania. Yeah call me a chauvenist pig.

My trueest nature is in the full support of girls like pussy riot, the yessidi girl army, or that little saudi girl going out of their way to get a bike in defiance of control, command and usurper of authority.

I believe, like pontius pilatus that the greatest revolutionary of all was born about 2018 years ago. And that the slogan bikers for jesus will be reciprocated in the future.

I have shown many times before that I am incomprehensible to many on where I stand on issues, as I myself would define it as a champion of beauty expressed in freedom. But yeah an epitath like, male chauvenist wouldn't bother me either. One is defined by deeds not labels and I love it when people LOL in the process.

OK. Because you didn’t capitalize “Pussy Riot”, I had no idea they were a Russian feminist punk rock band. So the two words just sounded like an attempt at shock value. No problem, though. I am consistent, and my own interests in Russia quite predictably center around Russian classic cars, the Volgas, Pobedas, and Zils primarily.

When punk rock first came out, many music fans were led to expect a return to the garage rock genre of the ‘60s. Instead, we got unlistenable groups, like the Sex Pistols, and the Plasmatics. It wasn’t until the Ramones and the Clash came out that Punk rockers seemingly began tuning their instruments and learning to play them in ways that actually contributed to the songs.

I recently finished watching the TV series “The Americans” in which the leading characters were Russian spies and infiltrators, agents of the KGB, who spoke English as if it were their native tongue, and lived a typical suburban middle class lifestyle. It was set in the 1980s, and was very educational. I really learned a lot about Russia from the series.

Rather than capitalizing I thought the mention of putin would do the trick.

Some of the former Soviet (car/weapon) brands are into watches nowadays.
"Swords into watches" as the Soviet donation to the UN (sculpture) (in ambassador gardens) symbolized.

Yeah, that is how the Russians operate today. Send young Russians into the West, have them make a career into positions of access within a 20 year period and activate when necessary. The most beautiful women of the world as lethal weapons.

Don't think for a moment that Moses's godmother was a "daughter of pharaoh", she was a pawn in a game of ongoing political exchange of foreign alliances and foreign emissaries between the other superpowers, probably a princess of the hittite empire and the Israelite tribes happened to be in the hill country in between 3 to 4 other superpowers.

Kinda like the Congo in the 19th century over which the superpowers could not agree and deeded it to a belgian king, whose kin used to be good friends with HWA for decades with many sleep overs. HWA mission to fill the void of the "non alligned countries" during the cold war was largely the same as the belgian mission in the congo.

Don't worry about the Russians. They have seldom to never attacked another country if not provoked. We did provoke the Russians though with the World Tomorrow sponsoring of the CIA radio station Radio Swan aimed at Cuba just before the 100 day and bay of pigs incident.

WCG made good though with the Russians in Leningrad in Putins office early nineties. I dealt with Sobchak on trade while WCG on culture and media.