Ron Weinland: God is Going to Reveal the Mockers of the Church 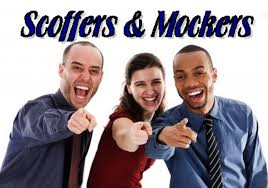 While Ron Weinalnd is sitting in a jail cell with Big Bubba, his little henchmen are out trying to deliver sermons.  Apparently Mrs. Weinerdude, the second half of the Two Witnesses is not smart enough to deliver messages.

Wayne Matthews recently had this to say:


3) God is also going to reveal the perverted attitude and spirit of all who mock Him, His Church, and His servants. Those who scoff, criticize, ridicule, and mock God’s Church have used the occasion of this revelation to find fault with God’s Church for changing doctrine (as they see it) and timing in order to better suit their own false needs. Such critics foolishly and unwittingly put themselves in a position of judging God. The very thing they mock is the very thing that will end up being used to mock them. God is revealing the kind of hatred that has existed in the hearts of men and women toward Him and His people for nearly 6,000 years now.

Like all ministers and evangelists in the Church of God that utter prophetic nonsense, they have all had to back-peddle and spiritualize away their utterances.

Weinerdude Weinland is NOT a servant of God, does not oversee one of God's churches and does not have servants of God its midst.  So I certainly WILL mock Ron and his cult without fear of death or other horrible disease that Ron has prophesied will happen to all of his mockers.
Posted by NO2HWA at 1:45:00 PM

It never seems to dawn on these folks that noticing lies and unfulfilled speculations that actually affect people is not mocking. It is noting.

Know what? I agree with him! It would be wrong to mock God, to mock His church, or to mock God's ministers and people. Weinland and his crew are none of the above. They have already proven that they are the Deut 18 people. They play for the other team!

"Behold, in the last days, false prophets will come and be mocked... mercilessly."

Yes, let's see, the Messiah of scripture, who in the narrative is mocked and taunted and does not resist torture and violence and abuse and ridicule and is beaten to within an inch of his life, and is then executed in a gruesome ritual...is now obsessed with mocking people right back, and seeing them get theirs.

"Yes, let's see, the Messiah of scripture, who in the narrative is mocked and taunted and does not resist torture and violence and abuse and ridicule and is beaten to within an inch of his life"

2Peter 3:3 Knowing this first, that there shall come in the last days scoffers, walking after their own lusts.

Jude 1:18 How that they told you there should be mockers in the last time, who should walk after their own ungodly lusts.

Scoffers/mockers are these false impostors causing derision and denying the very Savior... Preaching another "Jesus". They all hate one another. The truth is clear to those that want it. Stay clear of Armstrongism.

Ron Weinland has been, in effect, ridiculing and mocking the credulity of his followers since he first started trying to be a prophet. He's also been making a mockery and a fool out of himself. If you don't want people pointing out how ridiculous the things you say are, then don't say ridiculous things in the first place. If there's no ammunition, the ridicule will end.

He's playing to the very most gullible people. No one else will believe him.

He's taken HWA's sleazy tactics to the extreme, and will only pick up the most brain-dead of followers.
But it's a market share, and it pays well.

I never thought a charlatan could be so shamelessly unrepentant when he got caught. It's like watching Bernie Madoff pretending to be the Apostle Paul!