The Church of God: Fact or Fantasy? 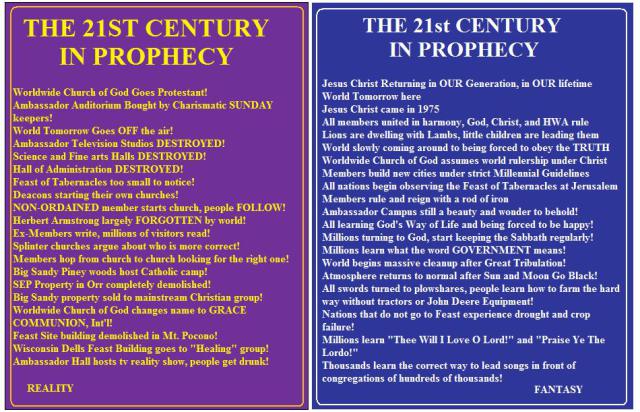 All About Armstrongim has a great post up today about the reality of the mindset of the Churches of God.  The myths and stories we believed over the decades have no relationship with reality.

Check the article out here.

I've been trying to wrap my mind around the events leading to 1972-75, the "original" end so far as those who came into the church during the 1950s and '60s were concerned.

Living in those stressful times, my overall impression was that as we drew closer to the end, Philadelphia and Laodecea would coexist, much as Siamese twins. It's not as if during 1969, 1970, and 1971 we felt that there was time for a separate era with separate leaders to start up. Even as certain ministers began to split off, like Raymond Cole, Ernest Martin, Al Carrozzo, and Ken Westby, these men were not seen as starting the Laodecean Church, they were seen as having rebelled and left God's Church. I felt that Laodeceanism was a certain attitude, and that we would not know who was Laodecean until we saw who qualified for Petra, and who was left behind to face the Germans.

I believed that we were in for some very difficult financial times, much social unrest, food shortages, and disease epidemics leading up to the church fleeing. How we would "flee", I had no clue, and I don't believe anyone else really did, either. Most of us felt that when the time became right, God would work all of that out. We just all hoped and prayed that we as individuals would be worthy.

I don't recall any speculation about the campus or grounds. Although all of us realized that it was physical, and certainly would not last forever, probably most members never thought it would fall out of the hands of the church, or be demolished at least until the church fled. There was one wild modifier in that. We believed that at some point there would be great persecution, even by our government, and that various things might be taken away.

Above all, we fully expected HWA to live, and to continue to be vibrant, leading the church to Petra, and meeting a returning and triumphant Jesus Christ, as we would all be caught up into the sky.

And, then, suddenly, I and numerous others abruptly woke up as if from a bad dream that had lasted much of our lives. Nothing happened. Nothing at all. Despite the three equations "proving" that Jesus would return in 1975, it all fizzled out, and we realized that it had all been a crock! Just as surely as the followers of William Miller had all been had, so had we. I realized that probably some would be sharpening their pencils and attempting to recalculate a date that Jesus had foretold that it was not given to us to know, but I didn't hang around to hear their revisions. What boggles my mind is that here we are, almost 40 years later, and the recalculations and carrot dangling have never ended!

I don't believe that any of us, whether we remained in WCG, or left, could have forecast what has actually transpired. Many of the people who went on to lead splinter groups are the least likely suspects, people you would never expect even remotely capable. Who could have known that there would be 700 splinters, and thousands of independents, all claiming to be God's True Church? It is unbelievable that the church dodged that bullet, only to recover, grow, and then end up imploding and fragmenting anyway, as well it should have on 1/1/76. R.I.P.

Lions aren't dwelling with lambs, but apparently the lambs are living with the wolves.

Incredible isn't it? And so sad when you think of all the people who wasted their lives and potential believing the fcuked up fantasies of this delusional, erratic, lying, judgmental, narcissistic, egotistical, messianic-pretending, attention whore. I guess we all need to break through the fourth wall sooner or later in our lives for a good shake up! And we've all had to rebuild inch by inch what little remained of our lives, relationships, careers, faith and sanity--and many still are to this day!--after having it totally upended by the demonically paranoid, conspiracy-laden, fear-based, wildly speculative, grace-diminishing, eisegetically-riddled and in essence unbiblical "theology" of a charlatan who marketed himself and his religious business as though he were THE ONLY ONE in the world who singularly and exlusively knew THE ENTIRE TRUTH about the Bible and the distant past, present and immediate future unlike all other Christians! As the saying goes, "time will prove you out" and history since the 1970s at least has proven HWA and all of his religious mafiosi actually knew--and still know!--very little, if ANYTHING at all! And at the very least they all are no better (and know no more) than their Christian counterparts (who they continually to this day falsely accuse of being less Christian than themselves)!

BTW LOL @ the youtube video! Shows just how much we all tend to follow the herd instinct.