If they have persecuted ME, they will persecute YOU! 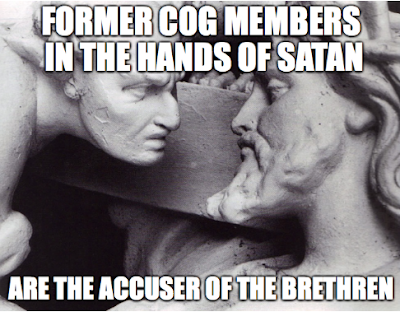 I was browsing through one of David C Pack's booklets today.  OK, I know, what a dumb thing to do, but...oh is it ever entertaining!  The booklet is, "Should Accusers Be Answered?"

One thing the various COG leaders of various personality cults receive is a LOT of criticism.  In the Internet age of today, as soon as they open their mouths or put pen to paper, everyone knows what they said.  It happens so quick sometimes that they are left stupefied.  Then, after being endlessly mocked and ridiculed, they attempt to pull their articles and sermons from the web (as Dave has done) trying to cover their tracks and save face.

Every single one of them blames dissidents, whom they imagine are influenced by Satan, as "persecutors of the brethren." None of them can ever stop and take an inventory of their words and actions and realized that much of what they say is a load of bull and they are being called out for their abuse of the brethren.

Most of them have told so many lies now that their brains cannot even grasp what it is to be an ethical, moral and grace-filled minister.  From outright lies about how God had placed them in their leadership rolls, to wild and blatantly idiotic prophecies, and to their sick whoredom to the law, the false leaders of the Church of God have become blind to their own perversions.  It is easier to blame the other than to examine their actions.


Christ described our time as the age of hatred, betrayal, offense and lawlessness (Matt. 24:10-12). Many today use and promote innuendo, rumors, outright lies and other forms of deception to confuse and divide God’s people, and defeat their confidence in Christ’s ability to govern His Church. When presented with such information, what do—what will—you do?

Christ said, “If they have persecuted ME, they will persecute YOU!” This means attacks, sometimes vicious, are a fact of life for God’s people. The true Church and especially its leaders stand squarely in Satan’s crosshairs. It will receive the brunt of persecution prior to the Tribulation, when Satan will turn on the “remnant” of Laodicea (Rev. 12:17). Should Accusers be Answered?

I don't think any of the so-called "dissident" sites have ever accused the brethren of things, but have held their leaders accountable.

We have leaders in the Church of God today, like Dave Pack, who wants all of his members to give them all of their money while making outlandish prophetic claims.  Gerald Flurry forbids family member from having contact with former members which immediately wrecked marriages and familial ties, while claiming he is in possession of the new coronation stone of Jesus Christ. Bob Thiel lies about God setting him apart to do a final work, after suffering major butthurt by being rejected by his "daddy" Rod Meredith, that will be greater than anything Meredith could ever have imagined.  James Malm has made a business of whoring himself out to the law so much that he has become blind to the mercy and grace of Jesus Christ. Gerald Weston expects church members to support him for a final push as he carries on envisioning the world filled with depravity while his own headquarters is a quagmire nepotism and spiritual depravity. Vic Kubik leads a church that is now known as the wishy-washy Church of God which cannot take a stand on anything because they still live in the past.

So just who are those that persecute the brethren?  Is it the "dissident" blogs and websites, or the corrupt leaders of the various Church of God's today?  None of us directly picks on members of the various groups, but we do have a fervent desire to see those people freed from the lies and vile abuse their leaders dish out on an hourly basis. There are may COG groups out there who are not even on our rader because they actually doing some good in peoples lives.  They don't make extreme demands or utter wild prophecies.  They actually seem to care for those who are part of their groups.

If you are a Christian, you know that there is an accuser of these men who is greater than Satan or some dissident web site. These men don't fear that One, because their narcissistic arrogance has blinded them as to whom the real abuser of the brethren is.

None of the church leaders or members have ever face real persecution. None have been burned alive, tortured,or thrown into prison (Mr. Thiel came close, at least in his mind). Their version of persecution is being called names or someone disagreeing with them. In 10-20 years from now all of the leaders will have died from natural causes.

When you see one of those "leaders" berate the members, this is proof that the leader does not know Jesus Christ. Why? Because this is what Jesus Christ said:

"My sheep hear my voice, and I know them, and they follow me."

That's John 10:27. When a minister sees that the sheep are going elsewhere, he shouldn't blame the sheep. He should examine himself.

Welcome to the ACOGs, where your only persecution comes from the ministers and other empowered authority figures!

Maybe we should cut to the chase. We contact Homeland Security and tell them about the collection of Armstrongist fragment churches and their leaders. We note that:

1. Their beliefs closely parallel those of the Branch Davidians.

2. They believe that Native Americans should be exterminated.

3. They believe that African Americans are descended from Canaan and are supposed to be enslaved.

4. A collection of their ministers down in East Texas are Anti-Semites.

5. A member once tried to blow up The Dome of the Rock.

6. They are all perched on the edge of their seats waiting to flee the country to set up their own Mt. Carmel.


Maybe they would be put on a Watch List of Hate Organizations by the Government.

They would all wail persecution. The great weakness in their defense is that they actually believe the points above.

NEO, what makes you think the government doesn't already know about the splinters? There have been interesting, though unproven, rumors that PCG has a HQ employee who is actually a federal informant, and that two different federal agencies each got one of their own men into a position at LCG HQ. Imagine how much fun the government must be having if there are two LCG moles channeling information to federal agencies instead of to ex-ACOG forums!

NEO
I have been reading church literature since the mid 1960s, but have never read that the church believes that natives Indians should be exterminated or that African Americans should be enslaved.
Such crackpot comments only discredits legitimate complaints made on this blog.

I looked through this "booklet" yesterday and was thinking if anyone else had any thoughts about it and today I see it. I have a friend who suggested to me to contact the Attorney General's office and inquire about RCG and the preying practices they use to get money from people. I was asked if there were any lawsuits filed against them but I couldn't say either way.