The Book of Pack 6:66: Thy Priests and Thy Servants Shall Be Fed By The Eagle 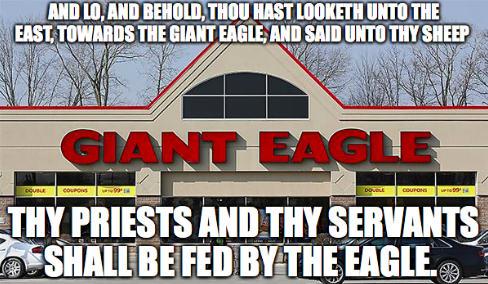 "And Lo, and Behold, Thou hast looketh unto the East, towards the Giant Eagle, and Said unto thy sheep, "Mine Stomach Hast Thou Gurgleth! Go Unto Thy Giant Eagle and Purchase unto Thyself Thy Folgers Crystals and Thy Krispy Kreme! Go Thou, Forth and Forward, and Exit this Land of Common, For Thou Shall bring forth thy Pastries into Thy Storehouse. And So the Priests and the Servants shall Be Fed By the Eagle.

And Lo, the servant shall rise up, on the hills toward the Upside-Down Wedding Cake Building, toward the Temple of the Pack, and Shall Place Thy Krispy Kreme on The Desk of Absolute Magnificence. And Lo, and Behold, It was heard within Thy Temple a sound within.

For what shall we Compare Thy sound To? What shall we behold? For The Apostle Picketh Up the Folgers and Thy Krispy Kreme. And Lo, It was Eaten. And I heard a sound like "Nom, Nom Nom." And Thus, the Apostle Had the Energy to Write Forth another Booklet, A Scroll of Such Magnificence, to be delivered Unto All Nations, and Peoples, and Tribes, and Tongues, that All shall know Who Is Pack.

ur pack fetish is a bit much...

Good thing I wasn't drinkething Folgers or eatething Krispy Kreme when I read this. Would have made a horrible mess all over the computer.

Folgers? Krispy Kreme? No, those would be far too normal. For all his weirdness, I was thinking Dave is probably into analingus.

Pure nonsense, besides meaningless. I’m sure many of the comments will fall into the same category. The first comment made it plain.

This post is nonsense, but unfortunately so is Pack, and some humor can hopefully lighten up someone's day. In an essence, it pretty much sums up his attitude, since he see's himself written in scripture anyway.

This is great! Ignore the sourpusses who can’t handle church humor. They take the life and the church far too seriously. Has the COG become a great cosmic joke? Dave has sure made it one.

Exactly the point. Because most of the stuff coming out of Wadsworth is nonsense, and meaningless. All that happened here was exactly what Pack does each and every day - but just for fun - not convincing people that the Book of Pack is real, and demanding people give their assets to read the malarky! It doesn't take much to make things up for a laugh. Pack made it into a job. And so do the other fiction writers out there who have turned their imaginations into belief. At least with this post - a laugh was had, and maybe a few people got the urge for coffee and donuts! ;)

Look, in a blog as volatile as this one is in subject matter, laughter truly is the best medicine. And if you can't find laughter in a building that looks like an upside down wedding cake, in a guy who thinks his small property next to a grocery store is the most important place in the universe (with power lines cutting through, mind you), or simply the last name that makes you want to go on vacation all the time, then you probably can NEVER find laughter. This blog needs MORE humor, not less.

As they stood there, staggered and stunned by the glory of the Headquarters Campus they inquired of the Apostle saying: Mr. Pack, tell us the sign that accompanies these things for
which are soon to pass for which ye hast spoken about. And the Apostle spake unto them saying 'Don't miss this- when thou seest the TARDIS standing in the middle of the parking lot
of the Wadsworth Giant Eagle where it ought not belong, let them that dwelleth in the Produce Section flee to the Express Checkout line. Pray that your journey is not on the
Sabbath, for it will be Car-mageddon on Ambassador Drive...'

-Acts of the 21st Century Apostles

I find 98 percent of no2hwa's postings hilarious. Content, manner of presentation and sarcasm by simply repackaging their own words.

It shows that surroundings do matter.

Well Nck, you actually get it. Never once have I taken a lot of what is posted here seriously. How can any one take these men seriously when they say and do the idiotic things they do. By taking their weirdness and isolating it in tidbits brings the craziness forward for all to see. Otherwise it gets lost in their endless screeds where they think no one will notice. Many times I am laughing the moment I find some nonsense to post. But on the flip side if people see this craziness and the light comes on to leave it, then great. Many have and that is a good thing! These former members of different groups also send me stuff occasionally. This includes spouses, relatives and children of leaders.

Some of the headlines you come up with and accompanying copy are talented copywriting.

I am not heaping too much praise, for you might slack, or worse start "trying to be funny". I like the present format by letting their own words speak for themselves, with your, at times, hilarious commentary dripping with sarcasm like vinegar.

But hey, what is it, election season? I should keep my opinion to myself.

I just feel the blogpostings should be appreciated on their own merit, before "we the people" embark on our daily collide regarding the interpretation and meaning of it all.

I think it is hilarious that so many sourpusses cant handle some church humour. It's not like any of them can be taken seriously anymore.


It is amazing how someone like Dave Pack can “lose all his marbles” and go totally nuts the way he has in recent years. It might be entertaining for someone watching from a safe distance, but it is a very real disaster for anyone who still believes that babbling demoniac.