Verdict: "GUILTY OF BEING A FALSE PROPHET AND SPEAKING PRESUMPTUOUSLY." 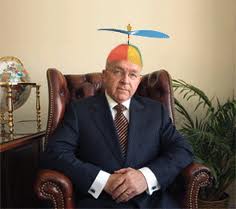 Prophet Thiel has made up a list of "charges" against Ron Weinland that "prove" he is a false prophet:

Some of these "charges" can be taken and inserted with Rod Meredith's name and thus would equally apply to him!  Shall we make our own list of failed false prophecies of Rod Meredith?

Charge 3: He wrote in his 2008 God’s Final Witness book that various leaders in the Living Church of God, United Church of God, and Philadelphia Church of God would die towards the beginning of his Great Tribulation.  None have, and since according to his own statements, the Great Tribulation is mostly over.  Verdict: GUILTY OF BEING A FALSE PROPHET AND CLAIMING TO BE ONE OF THE TWO WITNESSES AND SPEAKING PRESUMPTUOUSLY.

Charge 4: He falsely claimed that a little after April 2008, the US dollar would be worthless.  The US dollar is still valuable.  And apparently according to the IRS, so valuable to Ronald Weinland that he allegedly “did willfully attempt to evade and defeat the payment of a large part of the income tax due and owing by him to the United States of America for the calendar year 2008″ on “or about October 15, 2009″ according to federal documents.  Verdict: GUILTY OF BEING A FALSE PROPHET AND SPEAKING PRESUMPTUOUSLY.

Charge 6: He falsely claimed that the USA would not get a new president to take office in January 2009.  Yet, on January 20, 2009, Barack Obama became USA’s 44th president.  Verdict: GUILTY OF BEING A FALSE PROPHET AND SPEAKING PRESUMPTUOUSLY.

Charge 7: He claims to be part of the Church of God, yet instead has repeatedly denied the deity of Jesus.  The Bible teaches that Jesus is God.  Verdict: GUILTY OF HERESY AND APOSTASY.
Charge 8: On August 8, 2009 he falsely declared that 2008 was God’s final witness.  That is false.  By definition the two witnesses are supposed to give a witness.  His own words again convict him.  Furthermore, he and his wife Laura have not been effective witnesses.  Verdict: GUILTY OF BEING A FALSE WITNESS AND SPEAKING PRESUMPTUOUSLY.

Charge 10: Ronald Weinland continues to preach and teach false information about the Great Tribulation and the return of Jesus Christ–which he now claims will be May 27, 2012.  This is not possible as certain biblically-required events have not occurred (see, for example, Matthew 24).   Verdict: GUILTY OF BEING A FALSE WITNESS AND SPEAKING PRESUMPTUOUSLY.

I find Doctor Bob guilty of being a pompous @$$, for needing to have the final say as evidenced by his switching off comments in his Wordpress template.

And as well for using material obtained from my blog without linking to it or giving attribution.

Mike, I agree with you. I always thought it was cowardly that he never allows comments. As far as him calling ANYONE out for being a false prophet, the hypocrisy goes on and on...

Agreed! The Armstrong movement always did seem to be a magnet for Niedermeyer-type characters (Animal House). I just don't know where one could find a greater concentration of them on the face of the earth! And, boy howdy, did they ever dominate Spokesman's Club and Ambassador Club!

"Dr" Bob is a pompous nutcase ass, and his beloved cultmeister the Roddster is EXACTLY guilty guilty guilty of what "Dr" Bob accuses another of.

If so, I wonder if "Dr" Bob, or Rod, (or both) are deserved of the electric chair.