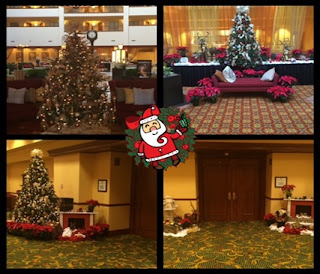 LCG is getting ready to have another wonderful Christmas at the Renaissance Hotel in Charlotte. There will be games and fun for all! Lil Jimmy is even planning a Hawaiian luau (Lil Jimmy LOVES Hawaii after all and he just can't get enough hawaiiana, even after a tithe payer vacation in Kauai from before Atonement until a week after the Feast [nearly a full month]). See: Living Church of God: Lil Jimmy Has A Great Feast In Hawaii (Again)

People will travel far and wide to celebrate the season surrounded by Christmas trees, nativities and plenty of faux fireplaces for Santa to come down to deliver gifts to a the good LCG boys and girls (if he can find any). Although I'm guessing Rod McNair and Spanky will be getting lumps of coal.

LCG members and ministers have flooded Facebook with articles and videos about the evils of Christmas but for some reason, instead of "coming out of the world" as they admonish us to do, they have decided to immerse their members and children in  a super Christmas environment for a little seasonal fun.

Armstongites view themselves as superior, more enlightened, more Godly than the "people in the world".  They look down their noses at all the "blinded" worldly "so called Christians" who "worship Pagan God's" by putting up Christmas trees and by commemorating the birth of the Savior on December 25th because it coincides with the winter solstice. In true LCG form, all the Christmas regalia at the Renaissance is okay because it suits their purpose. But they withhold the right to judge others for doing the same thing should it suit their narrative in the future.

Many of us can't wait to hear LCG's inflated, outlandish attendance numbers. Is there any way we can get the entire front desk staff, all managers and hotel wait staff in the banquet room during services at some point so that we can count them? Or maybe we could count the non-LCG people having coffee in the hotel lobby? Whether it exists or not, we must show growth brethren!