The Latest Issue of The Journal (Issue190) 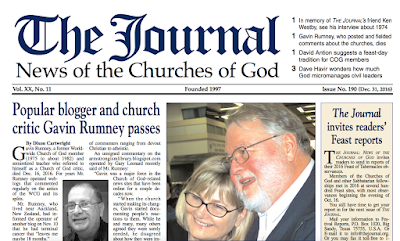 The latest issue of The Journal is out with a nice article about Gavin Rumney.

There is also an article by John Robinson detailing Ken Westby's take on the 1974 "rebellion" of some on the East Coast.  I remember this time in the church.  Westby called it a "reform movement."

Mr. Westby was also known as the leader of a movement from within the Worldwide Church of God in the 1970s sometimes referred to as the 1974 East Coast Rebellion. However, Mr. Westby said it wasn’t a rebellion. He called it a reform movement.

The article then goes on to talk about how they estimate that up to 10,000 members left the church during this time.  I know in the Dayton church we lost quite a few members from this.

Living Church of God has another ad up for their "university."   They don't like their members associating with other COG's but they think it is appropriate to poach youth from other COG's. Something is wrong with that picture. 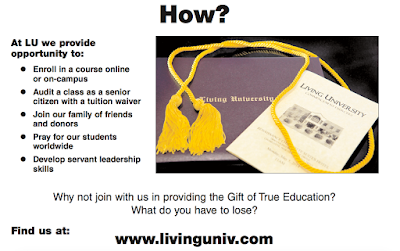 Don Billingsley is back with  another one of his outlandish articles about his vision of end time prophecy in action.  As usually his goal is to get you to read The Mystery of the Ages along side your Bible, since it is the most important book ever written.

Time is Running Out—Based on what is made known by the news media, coupled with the end-time proph- ecies, it should be real- ized the handwriting is on the wall for this na- tion, and the end of it is now very close as it was for Belshazzar King of Babylon (Daniel 5:1-31)! Prophecy reveals super- power America will be conquered by the Revived Holy Roman Empire as was the impregnable Babylonian Empire by the Medio- Persian Empire.

MYSTERY OF THE AGES—Study your Bible together with the last book Mr. Herbert W. Armstrong wrote: the unedited MYSTERY OF THE AGES, ISBN 0-396-08773-6, and believe it. This could save your life from the worsen- ing troublesome times before us. R emember— Mr. Armstrong was the man Jesus Christ used to teach all of us His truth (II T imothy 3:13-14)


Marie Casale has an ad up telling COG members to leave their spouses if they have remarried after divorce.

We are told to flee from fornication (1 Cor 6:18). This means that members who have unlawfully married or remarried should flee from those marriages. It also means that prospective church members who are in an adulterous second marriage while their first spouse still lives should flee from that marriage before they are baptized. Why? Because baptism does not change the definition of an adulterous marriage, nor does it forgive adultery that people are still going to continue living in.

We are also told not to company with fornicators (1 Cor 5:9-11). This means that we should separate from and stop having a one-flesh relationship with our spouse if he or she is an adulterer. If we don’t, we will defile our temple of the Lord. This is why divorce is allowed for fornication and why the Lord’s example was to divorce Israel for her fornication.

You can read issue 190 of The Journal here.

Anybody willing to be money that Marie Casale is divorced, and her ex-husband remarried someone else better looking or younger?


Could be Connie, but I suspect it is just a case of her underpants being too darn tight.

The truth is that the Worldwide Church of God was quite the revolving door in the 1970s. Herbert Armstrong bragged that the 'Work' grew at a rate of 30% per year. At one point, the WCG had claimed that there were 140,000 people in it (maybe as many as 100,000 baptized 'members'). The thing is, people would come into the WCG, look around and promptly leave... BUT more people came in to insure the membership numbers stayed up.

At least we think so.

The other truth is that very much like Scientology, there was quite a lot of exaggeration and misdirection. There were 8 million Plain Truths circulated? Depends on your point of view. Maybe 1.5 million made it out there, but Herbert Armstrong was absolutely convinced that 5, 6, 7 or 8 people read each and every single one sent out. This was garbage, of course. It was clear to those of us who attended services at that time that elders in the church neither read the Plain Truth or the Good News. For every issue sent out, there were tens of thousands that were read by 0 people.

The long article by Ken Wesby points out the very same thing that the 70 page letter of J. Orlin Grabbe points out: The leadership of the WCG was corrupt, chaotic and disorganized and the management was populated by wolves and the chickens who feared them, keeping their heads down so they didn't get torn to shreds. No one but no one was loyal to anyone but themselves and would betray others to protect their own interests. This was terrible leadership at its worst and quite in line with the 'leadership' of David Miscavige.

Ambassador College and the Worldwide Church of God was a total embarrassment, not worthy of existence and leadership was fully responsible.

And that's the glimpse we have from the latest The Journal.

After the WCG started imploding the leadership in Pasadena revealed the over the decades the WCG had been in existence ] over 500,000 people had passed through its doors. Half a million people who never stayed part of the church. Half a million smart ones.

Somehow, even as the corruption was unfolding, I justified sitting on the fence. My reasoning was that corruption doesn't invalidate doctrine, or prophecy. It just means that some people are imperfect. But, then I became aware that there were some very serious questions about key doctrines, doctrines which could be argued several ways, but that HWA/WCG always held to the most extreme interpretations which ended up producing bad fruits and creating an unneccessary burden for church members. The final straw was the great disappointment of 1975. At that point in time, there was nothing solid left to hold on to. It was time to recover, time to get on with life.

I remember the mid-70s when HQ thought the whole east coast was in rebellion. My pastor at the time called a meeting of the leading men to his home to discuss the rupture. He asked if we thought that the local membership in NH and VT would send their tithes to him if the WCG collapsed. I don't recall any dissenting voices.

I recall that evening one of us called Pasadena to speak with a student from our area. He told us that HQ thought the whole east coast was breaking away. We assured him that the group in Concord, NH was loyal. We were gullible stupid fools and True Believers.

11.13 PM
When I started attending services in the late seventies, someone pointed out that according to a old spokesman club (do they still run these?) photo, only one third still attended church. So doing the maths, 500,000 sounds reasonable.