Dave Pack: When it is time to flee do NOT go back home and get your expendable wife 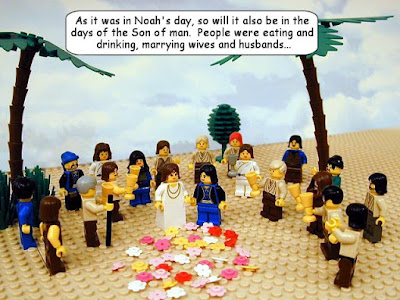 Super Dave has a warning for those men who are at work or not at home when he issues his Clarion Call.  They are not under any circumstances to go home and get their wives.  Apparently, their wives are expendable.  I think in this case though if should be the wives not going home to get their husbands since so many COG men are so emasculated.

“As it was in the days of Noah, so shall it be also in the days of the Son of man. They did eat, they drank, they married…they were given in marriage, until the day that Noah entered the ark, and the flood came, and destroyed them all…[So that’s likened to Christ’s Return, we’ll see that in a moment.]…Likewise also as it was in the days of Lot; they did eat…drank…bought…sold…planted…built; But the same day that Lot went out of Sodom it rained fire and brimstone from heaven, and destroyed them all. Even thus shall it be in the day when the Son of man is revealed” (Luke 17:26-30). So it’s talking about Christ’s Return.
Now here’s an interesting statement…“In that day…[I want you…I want to read this and see if you can figure out what in the world Christ is saying.]…In that day, he which shall be [on] the housetop, and his stuff in the house, let him not come down to take it away: and he that is in the field, let him likewise not return back” (vs. 31). Stop. Now, how in the world could people be thinking about that in the face of salvation?…What?! Want to go back to the house and get mom’s picture and a favorite sweater?
It’s interesting, “stuff in the house”…“stuff” is quite a word…It means “a vessel, implement, equipment or apparatus, specifically, a wife as contributing to the usefulness of the husband…” You wives never thought of yourselves as “stuff,” but now you know…and, presumably, if your husband was on the housetop and he was coming back for a vessel, implement, equipment or apparatus, he’d better be looking for you, too, right?
So…a little humor, there, but that’s what it means. The Greek is skeuos, and there’s a spiritual point. It might literally mean: No, this is you. Don’t go get your wife, and certainly don’t get your favorite chainsaw or hammer or, you know, the expensive vase you bought, this expensive vessel. Don’t go back there!” And if you’re in the field, don’t go back. Now, who would be thinking of that in the face of an angel taking you to the reckoning and the joy of the Lord and salvation! Who would be thinking that?! Let’s keep reading…
“Remember Lot’s wife. Whosoever shall seek to save his life shall lose it…[What?! How could you be thinking “save your life” when you just made eternal life, if you will? You won’t have a spirit body yet. This is the Return of Christ.]…and whosoever shall lose his life shall preserve it” (vs. 32-33). Who would be wanting to hold on to this life, on the very day they’re offered the next life?! See the problem?
“I tell you in that night [verse 34] there shall be two in one [couch]”…We know this now…One taken; one left. Two grinding, one taken; one left. Two in the field, one taken; one left (vs. 35-36). Now…whoa, whoa, whoa, whoa, whoa, whoa…taken, just gone. An angel arrives and says, “You ready to take a ride?” Boom—there’s no decision. So which is it? Are you taken or is there a decision point? See the problem? Make yourself come to grips with this. Are you just simply swooped up, the way rapturists think, off to heaven…Only we understand the truth of it…or are you a person who has a decision to make? You’re on a housetop, you’re in the field; there’s things you want, or you want to look back. Remember Lot’s wife turned to salt.

Mrs. Pack are you comprehending your fate???

“stuff” is quite a word…It means “a vessel, implement, equipment or apparatus, specifically, a wife as contributing to the usefulness of the husband…” You wives never thought of yourselves as “stuff,” but now you know..."

What a sexist pig!
I bet he doesn't win any popularity contests with the ladies.

Well, if Dave causes the lack of sexual favors for his church members, then he is responsible to replace them. Better go to the dentist and get all your teeth pulled, Dave!

I think my wife will turn into MSG...

I visit various ACOG groups and I find David Pack's RCG group the most bizarre. Yes, I visit them out of morbid curiosity.

I used to do that, but prefer blogs such as Banned which provide an 'executive summary' - with no annoying trail of popups and Google ads.

I can truthfully say I've never visited any after Worldwide group once my lukewarm relationship with Dr. Martin came crashing down. What's the point? I know the Sabbath and all those holy days are just warmed over Middle Eastern nonsense and Canaanite festivals to their pantheon of gods altered to fit the chauvinistic designs of the Jewish priesthood. The food laws are just tribal taboos with no basis in scientific fact. Even that Egyptian captivity and the exodus is a gigantic farce. Jesus is a fanciful creation based on "saviors" that go all the way back to Egypt and Horus.

Why waste my time or money on fantasies and what doesn't even amount to grade B historical fiction? I'm free. I hang onto my treasure as much as possible. I fear no damnation from any god and get bored to hear all this warmed over garbage trying to give credence to HWA's theological hodge podge.

"“stuff” is quite a word…It means “a vessel, implement, equipment or apparatus, specifically, a wife as contributing to the usefulness of the husband…” You wives never thought of yourselves as “stuff,” but now you know..."

What a sexist pig!"

Well what to expect when the scriptures he reverences is sexist from the get-go.
Eve was simply a "help meet" for Adam.
The wives of the patriarchs were, basically, vehicles for propagating their descendants. If the wife couldn't bear children, hey, use her handmaiden, or get another wife or two or three. So long as children get born.
Women are not to speak up in the churches, and certainly not teach.

It's primarily a man's performance, women are just the extras, the condiments, so to speak.
So obviously, don't rush back to your home just to get an extra, there are more important things you know....