Dave Pack: The Kingdom of God is HERE! You Will See A pillar Of Fire Here! 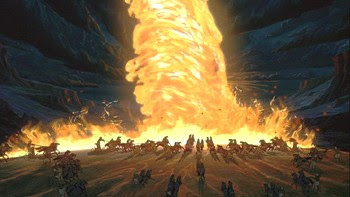 The narcissistic Wonder Boy in Wadsworth is going to make sure that those that don't want to listen to his superfantabulus  message WON'T hear it!    Dave feels that his message about the kingdom of heaven is so mind boggling that it is going to cause thousands and thousands of COG members in various splinter groups to suddenly throw off the mantles of their various church leaders and stream into the Restored Church of God.

Sadly though, Dave knows he has detractors out there that refuse to listen to and understand his mind numbing series of sermons (at 59 online now.)  The eyes if these detractors are clenched firmly shut so Dave, in fit of anger, is going to make sure they do not hear his message.


We are going to run into enemies going forward. They close their eyes and they’re clenched as tight as people clench their teeth. They don’t want to know, so Christ in effect says…they don’t want to know, so I’m going to make sure they don’t. These things are hidden from them; they are given to the Church. They will not be allowed to know, including even reading simple parables where anybody who stops and thinks should be able to say, wait a minute…a grain of mustard seed…You know, anybody can look up on the Internet and see that picture I showed you. They can read…Wait a minute…concealed it…Wait a minute, you’ve got to find it—got to find it—the field or a pearl—but they don’t. They just don’t. People don’t really read much of any of the Bible with understanding unless God calls them.

The Kingdom of God is HERE!  In Wadsworth no less!

And it is just our luck that Dave and his crew of misfits will be our judge!

But a loving God wants to see whosoever will call on the name of the Lord—he’ll be saved. It will still be, in a way, after that—but “you don’t have to obey Me until I say, ‘Oh, now you do. Billions of you—now you do.’” Every nation of the world—boom! And He throws down the governments of the world, and we go into resplendence. We’re the new judges. We’re the new world leaders after three-and-a-half years of confirming the promises to Judah and Israel, and offering and sowing seed in all nations of the world, and there will be people from all nations of the world that respond. That’s why, when the sheep and the goats are described in Matthew 25, it says He gathered before Him all nations. Do you know why all nations? Because the Kingdom had converts in all nations of the world and sadly some are goats; some are sheep…and some came out of the ground, and we’ll explain that at another point.


Remember though this is the first kingdom or  dominion that Dave keeps talking about.  That is why there will be tares in the midst of Dave's kingdom.  Those damn unconverted  goats will be running around trying to disrupt Dave's kingdom, but they will have no power over Dave and crew, just those unlucky fellow COG members who did not really believe Dave.

At this point Dave's god will take that pillar of fire and burn those deceived cantankerous COG members to a crisp.  After this divine BBQ, a new temple will be built in Jerusalem where Dave will be the first to walk up its steps and great his god.

Dave then gets to another point where his god plays a great cosmic trick on thousands of deceased COG members whom will resurrected by his god.  These former COG members who will think they are in the kingdom of God, however they will be in Dave's first dominion  because the other kingdom has not yet come.  Imagine having to spend 1,000 years ruled by Dave BEFORE you can ever make it into God's kingdom!  Hell on earth!

But here is a greater proof…here is the next proof that accompanies that…For decades, thousands and thousands of people in the Philadelphian era that I knew well…pastored many of them…thousands and thousands of people…They’re all coming out of the grave believing they’re in the Kingdom of God. Do you want to tell them they’re not? Do you see? That would be almost…It would be almost like Mr. Armstrong taught false advertising—that I did—that every one of us—that everything we preached at every funeral, everything we said to people as they read the literature…
The resurrection of the dead is into the Kingdom—they all died believing that and they come back and find out they are not in the Kingdom…They didn’t enter the joy of the Lord, but they’ve got another work to do…They’re going to say “I did that! Wait a minute! Well, okay, I’ll do it again, but that’s not what I was taught.” It’s almost as though, for it not to be the Kingdom…Thousands and thousands of people coming out of boxes under stones would come up, and you know what they would feel? They would feel lied to. You need to think about that. It absolutely is the Kingdom of God, but they are going to find out it started differently than they thought.

Dave and his crew will have to spend a long time trying to convince all these deceased members that they are in his kingdom and not in the Kingdom of God.  What a pisser that will be, but not for long!

When these former members are told they will get to rule over millions of people they will be soooooooo excited.  It is better to rule millions than it will be to rule a few thousands who survive the slaughter fest before the Kingdom of God really comes.

But when they find out they’re rulers and leaders in it, they’re going to say, “Great! What do I have to do? I’m in the Kingdom. I’ve achieved salvation.” They might be a little more excited knowing there are billions of people that they can work with, as opposed to a few millions who survived going into the 1,000 years. I mean it’s really…it’s going to be a shock to find out the Kingdom is much smaller but the mission field—which is the world—is infinitely bigger than they might have thought, if they thought maybe there’s only ten percent of the whole world surviving—which is what we used to think…They will be absolutely thrilled—it’s a few ten thousands leading billions—and they’re in. They’ll be thrilled to death.


Isn't it wonderful to be a Church of God member and know this secret knowledge!
Posted by NO2HWA at 3:55:00 PM

Dave keeps digging the pit where the future of his cult will be buried.

Uh, oh. With Dave's breakdown well under way, it behooves us to watch for danger spots in his theology where he can justify another Jonestown or Waco.

What if Dave decides that his "pillar of fire" is literal? If the bank forecloses and he's about to lose the property, he could very easily get all his people together (on a Sabbath?) and set one big fire on the soon-to-be-foreclosed compound, confirming that God will protect His people and show the world the truth about the Kingdom.

Hey, guys in the RCG, how's that working out for you? Bet you even think Dave's crap is being confirmed through your prayers, huh? Time to wake up and acknowledge the elephant in the room!

Just when you think Dave can't get any crazier - he does!! I can't believe he still has any members left!


“Dave Pack: The Kingdom of God is HERE! You Will See A pillar Of Fire Here!”

Try: The Kingdom of FRAUD is HERE! You will see a Towering Inferno called Dave consume everything you own.

Where in this entire universe did a load of crap like this ever originate? I mean, this is non-sequiter on top of another. How can any human being get that balmy? Time to call the guys in the white coats.

Man...Dave's "simplicity that is in Christ" is so complicated!

I've begun to wonder if Dave has found a way to translate his farts into English. That would certainly explain where all this stuff is coming from!

“Dave Pack: The Kingdom of God is HERE! You Will See A pillar Of Fire Here!”

I'll have a front row seat with my field glasses in hand at the Wadsworth Giant Eagle parking lot. I can't wait!

Dave ain't searching fer Gauwd, he is Gauwd. He is only searchin fer dose that can see wut he wants dem to see, DCP as Gauwd's chosen One. Enter into his echo-chamber and feel at peace or maybe torn to pieces, it's up to Dave, don't cha know yet?

C'mon sheeple, wake up! Why would the Grand Architect of the Universe rely on this stupidity to save humanity?

I get a chuckle when I hear or read stuff like, "grand architect of the universe." It's such a fairy tale approach to what amounts to a very small universe people imagined thousands of years ago. Hundreds of billions of galaxies, each containing hundreds of billions of stars, some of which would make our sun look like an insignificant pipsqueak, all arising in collapsing clouds of gas, then successively going supernova to produce all those heavy elements we walk around on on this little insignificant piece of rock. I could go on and on about the quantum facts we've since discovered and are discovering every day that make that fairy tale "god" look like the travesty he, she or it really is.

"What if Dave decides that his "pillar of fire" is literal? If the bank forecloses and he's about to lose the property, he could very easily get all his people together (on a Sabbath?) and set one big fire on the soon-to-be-foreclosed compound . . . ."

This speculation carries some weight. Pack has bragged about cutting timber on the property. Does anybody know what he's doing with the wood? The Aggies of Texas A&M used to build an elaborately engineered stack of logs every fall for a huge bonfire, until the one in 1999 collapsed and killed a dozen people and injured many others.

If Pack orders his employees to build a pyramid of logs, or to start leaning them against the building that houses the auditorium, it's time for everybody who prefers to avoid immolation to move to a saner cult in a safer location.

MmmHmmm...around that group, I would be suspicious of Dave's S'Mores Night for Gauwd!